A mother-of-two cyclist has revealed how she was left fighting for her life with a fractured skull and lacerated spleen after being thrown from her bike by a tiny pothole.

Samantha Sugden suffered life-threatening injuries when she cycled over the small hole – no bigger than a footprint – and was catapulted head first into the ground.

The 38-year-old was knocked unconscious, leaving her with fractured ribs and skull, a lacerated spleen and an injury to her brain.

Despite her injuries the B&B owner pulled through after she was airlifted off the steep Lake District pass by an air ambulance, with doctors having said that her smashed up helmet saved her life. 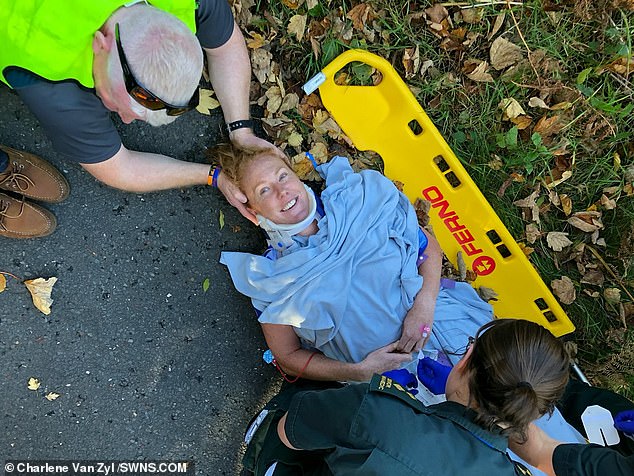 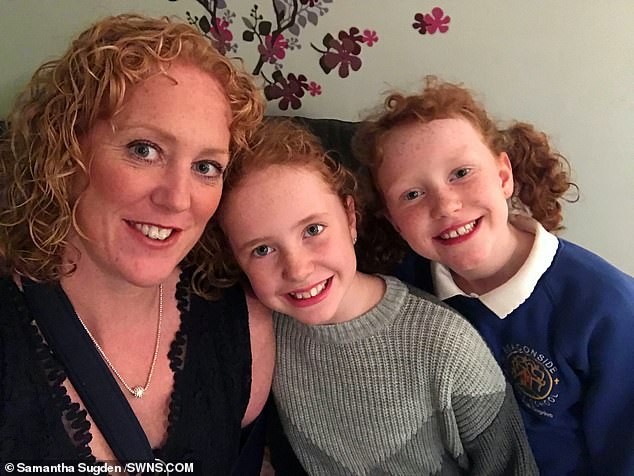 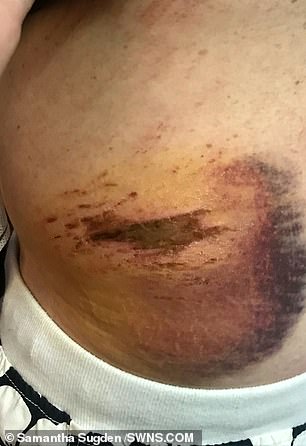 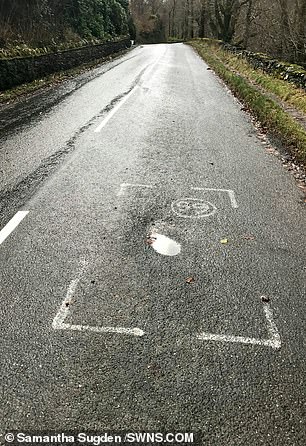 Samantha, a triathlete who competed at European level, raised money to thank the air ambulance crew who saved her life.

However, just one month later, she once again needed their help when she cycled head-first into a bus.

Samantha from Cumbria, who is now back in the saddle again, said: ‘I have met both crews and can’t thank them enough. It was very emotional for me.’

Speaking of the first accident, she added: ‘I was just happy to be alive but I wouldn’t have lived if it wasn’t for my helmet. 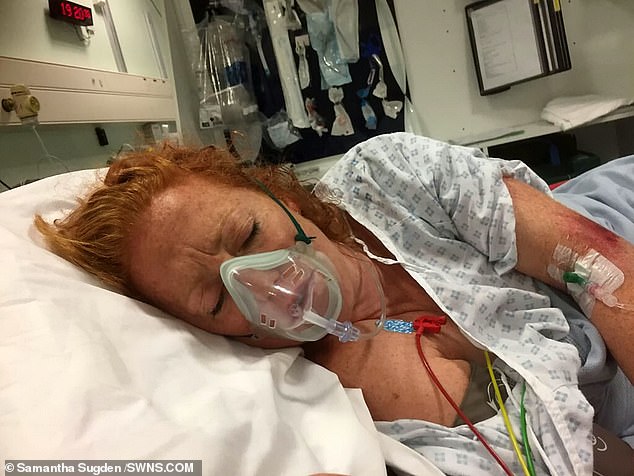 Samantha was flown to hospital after being thrown off her bike, she is pictured above in recovery 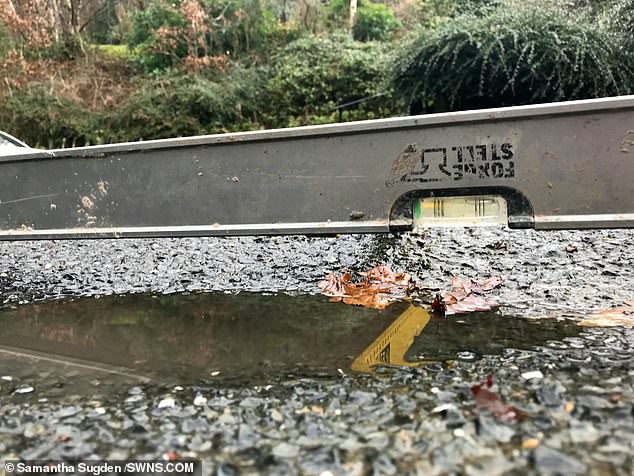 ‘There’s no question about it. I had hit what was like a smooth pothole in the road and before I knew it, I was on the floor.

‘I had no idea it was there. I could barely see it because of how small and hidden it was. I was in a life-threatening condition but I was lucky to not suffer worse injuries.

‘I was on a slow ride with my friends and we were five miles away from the car. We were talking about getting cake and coffee and the next thing I was on the floor.’ 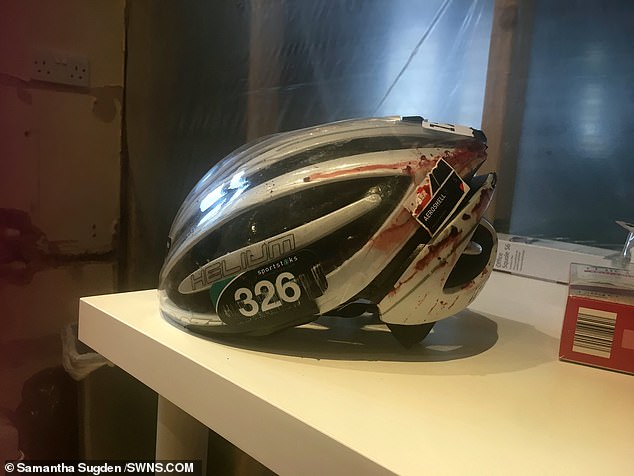 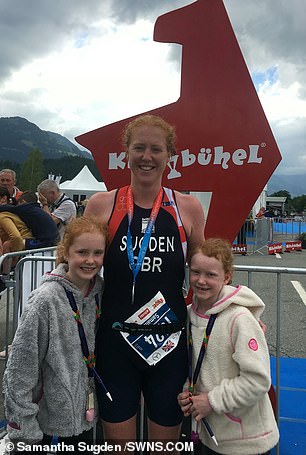 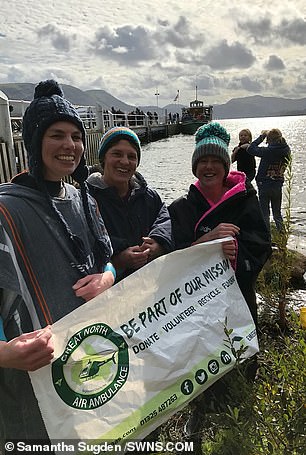 Samantha was first thrown from her bike in Keswick in August 2017 and was initially helped by fellow cyclist and friend Amanda Singleton, a trained paramedic.

She said: ‘She was able to keep me stable and maintain my airways. I literally flew down the road and landed on my head. When I stopped I had been knocked unconscious and was fitting.

‘When I woke up the first thing I said was, ‘was it my fault?’. I was so upset I had put my friends through that.’

She was flown to hospital in Preston but miraculously didn’t need surgery and was allowed home after five days, but it took her three months to recover fully. 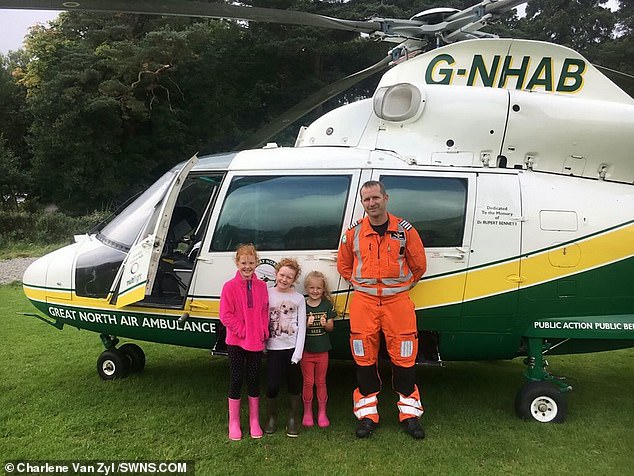 The daughters of Samantha Sugden,38,- Evie-Rose,11, Sophia,8, and friend Layla Bell,4,- stand in front of the helicopter which flew Samantha to hospital in Preston after her accident

A spokesperson from Cumbria County Council confirmed to the MailOnline that the pothole had been fixed within days of Samantha’s incident, as part of routine highway maintenance.  Maintenance works had taken place between August 1 2017 and September 1 2017.

Samantha’s accident occurred on August 27th and all maintenance had been completed the following week.

The brave cyclist wanted to thank Great North Air Ambulance Service for saving her life, so raised £3,200 by doing a seven-mile open water swim in Cumbria in September 2017. 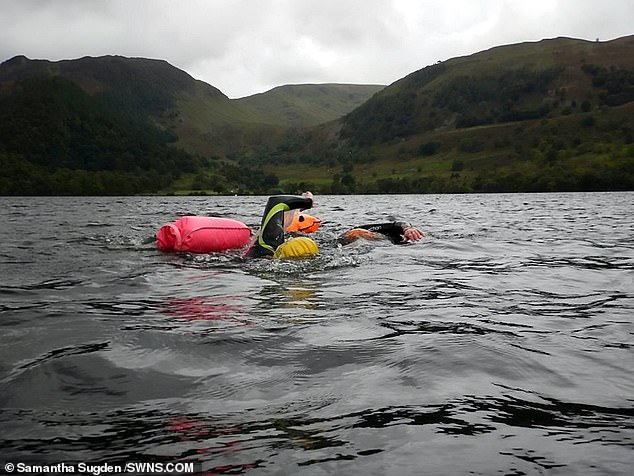 Samantha raised £3,200 by doing a seven-mile open water swim in Cumbria in September 2017

Just a month later she suffered life-threatening injuries when she collided with a bus head on in a quiet country road, near Ambleside.

Samantha who is a mother to Sophia, eight, and Evie-Rose, 11, was flown to Carlisle’s Cumberland Infirmary by the medics.

She needed surgery to remove an ‘annihilated spleen’ and repair her broken collar bone, and lost nearly two litres of blood in the minutes it took to get her to hospital.

After a week in hospital and another three months on the mend, she is now on the open road despite her children having begged her to never ride again.

‘My kids asked me not to, but I have been back on the bike in the last couple of weeks’, she said.

‘I’m most grateful for being alive but it felt so good to be cycling again.

‘It was awful to see the look on my kids face when they saw me in hospital. I hated them seeing me in so much pain.

‘It was the second time I had done that to them and it was very frightening for them.

‘I’m a competitive person and I will always compete.’

Paying tribute to the air ambulance service, she added: ‘They have saved my life twice. It’s completely invaluable and an amazing service. I am so grateful.

‘I may never compete at the same level as I did again but I love the buzz. I’m just happy to still be here to do it.’

Samantha is getting ready to compete again on April 27 at the European Duoathlon Championships in Spain.