Horrifying moment mother tries to fight off crazed pitbull as it attacks her daughter, 7, on a Buenos Aires street

A seven-year-old girl was viciously attacked by a pitbull terrier running loose on a street in Argentina.

Jazmin, seven, was standing on a street in Buenos Aires with her mother on September 26 when the pitbull sank its teeth into her leg.

Horrifying CCTV footage shows Jazmin’s mother holding on to her child as the aggressive dog refuses to let go.

The young girl falls to the floor as the dog latches on to one of her legs with its teeth despite her mother’s efforts to free her, the video shows. 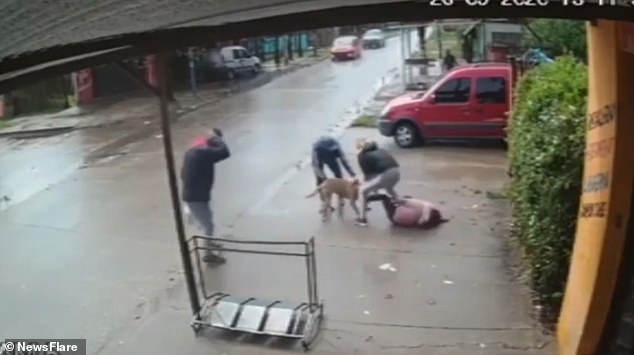 Jazmin, seven, was attacked by an aggressive pitbull while with her mother in Buenos Aires, Argentina, on September 26 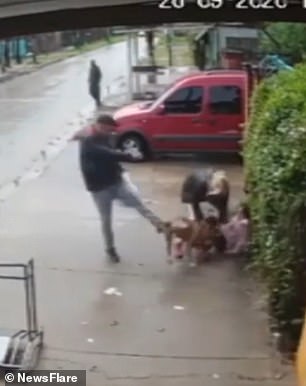 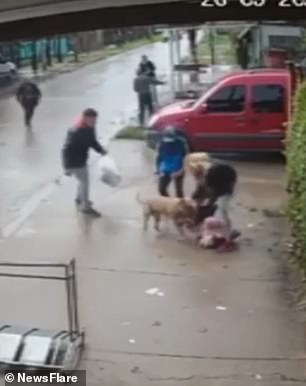 The dog latched on to the seven-year-old girl’s leg with its teeth and refuses to let go for almost two minutes, horrifying CCTV video footage shows

A man holding a shopping bag rushes to their aid but appears to be trying to kick the dog as Jazmin struggles against the hound.

More people rush over when they realise what is happening, with one person desperately trying to pull the dog backwards by its collar.

Soon there are more than five people trying to pull the pitbull off the girl, as one pedestrian grabs the dog by its back legs.

But the vicious dog refuses to loosen its grip on the girl as her leg remains tightly fixed in the animal’s jaw.

After almost two minutes, they finally manage to free the young girl and the hound quickly runs away through the crowds.

The dog caused an exposed fracture in one of the girl’s legs, but rapid surgical intervention meant she did not lose her leg. 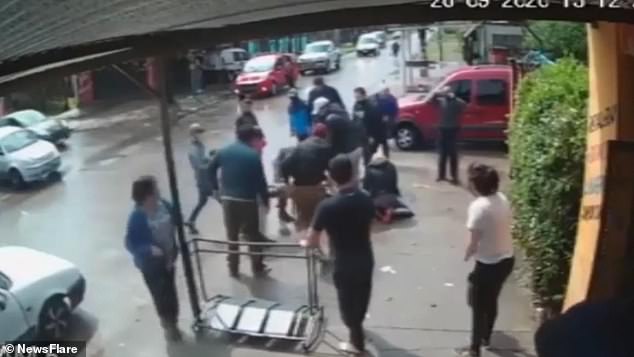 A massive crowd came to the mother’s aid as she desperately tried to free her daughter’s leg from the pitbull, which was not wearing a muzzle

Jazmin’s aunt said: ‘She is sedated and on medication. The doctors said she has a hip tear and that it is a long process [to heal].

‘My niece was shocked like my sister-in-law, both need a psychologist to attend to them. The baby does not want to eat, she is angry, she cries.’

The relatives have claimed that they had already identified the owner, who allegedly did not admit that the vicious dog belonged to him.

The aunt added: ‘He came yesterday and said that that was not his dog. But later we found out that he had abandoned the dog in the field because the dog had bitten my niece and he also wanted to sell the dog.

‘We need him to come and face this and do justice.’