Mother, 32, backs railway worker who drenched homeless man in filthy water saying he had threatened her and made her son cry

A mother has defended train staff who threw filthy water at a homeless man, saying he was drunk and had threatened her hours before the incident.

Southern Rail staff sloshed water at the man at Sutton Station in an altercation caught on a video that sparked outrage online as people called for workers to be sacked.

Two workers, one in a high-vis jacket and the other holding a green bucket, stand at the side of the man as soapy water pours down the street in south-west London.

He appears to plead with the men and tries to move around on the floor but they do not leave him alone and more water is thrown from the bucket.

But today a witness told The Sun Online that workers had been trying to get rid of the man because he’d spent the morning causing trouble outside the station.

Kirstie Webster says she and son Tommy, four, were verbally abused by the man, who she accused of making her child cry on Sunday.

The 32-year-old said the rough sleeper and a woman he was with were ‘very intimidating and aggressive’ to her as she bought a ticket.

She said the man, who she claimed was drunk, commented on her clothes and accused her of looking down on him. 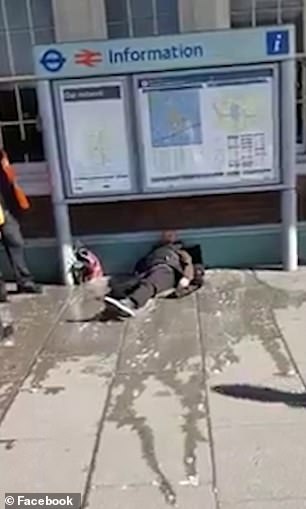 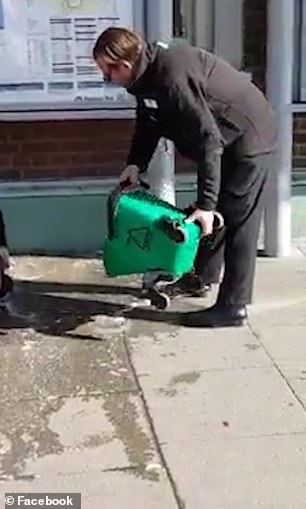 The homeless man stays on the wet floor, left, as the Southern rail worker pours dirty water around him, right, and another employee watches from the side at Sutton station

The Banstead woman said both were swearing and that their ‘disgusting’ and ‘abusive’ language left her son ‘traumatised’ and ‘in tears’.

She told the paper she reported the exchange to Southern Rail workers, who informed her that both had been causing trouble all day.

Ms Webster says she feels sorry for the staff member caught in the clip, saying of his actions: ‘Maybe it wasn’t the right way to go about it but you need to give the guy some slack.’

And she said that the worker who throws water in the video offered her tea and coffee to try and calm her down after her confrontation with the homeless man, who she added is known in Sutton as ‘not very nice’.

Horrified customers yesterday called for the sacking of the staff in the video which shows a carrier bag, thought to contain the man’s belongings, get drenched along with the homeless man.

One of the workers walks around to the other side of the homeless man and appears to say something to him before going back to the other employee. 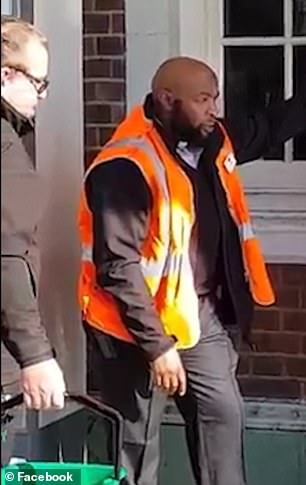 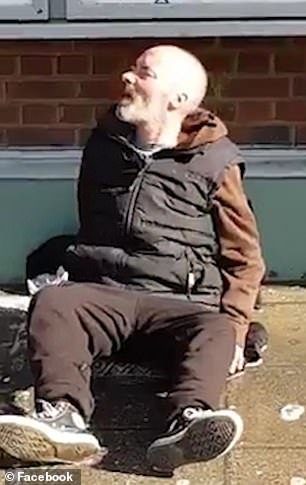 The two workers, left, stand by the side of the man as he pleads with them, right, to stop

The homeless man then sits up and appears to speak to them but what he’s saying can not be heard on the clip.

Shortly after the person filming can be heard saying: ‘I’m filming it because it’s absolutely disgusting behavior towards another human being.’

Someone else, thought to be one of the Southern workers, is then heard saying ‘you should know the story before you start recording.’

One of the men then starts mopping up the soapy water as the homeless man stays on the floor. 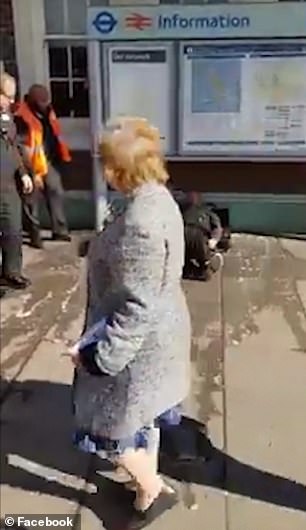 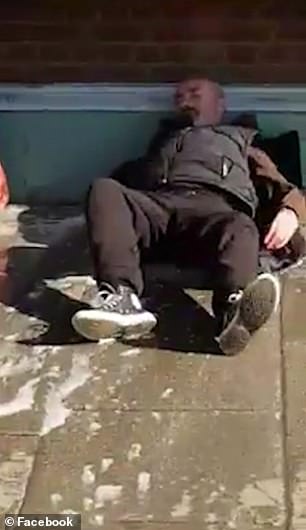 People walk pass the shocking incident, left, while the man, right, stays sitting in the water

The shocked passenger who recorded the incident, which happened at around 12.30pm yesterday, shared their footage on Facebook.

‘This took place at Sutton station. To make things worse it transpires there was bleach in the dirty user water and the gentleman is diabetic too.’

Dozens of other people have commented on the clip slamming the ‘awful behaviour.’

One person wrote: ‘This is awful. What disgusting treatment of a human being. Makes me sick.’

Another added: ‘Disgusting! Not only is this just wrong and humiliating…the knock on effect that would have had on his day as well, soaking someone who may have no means of getting dry.’

Angie Doll, Passenger Services Director for Southern Railway, said: ‘We take this incident extremely seriously and have started an investigation.

‘The two staff members seen in the video have been suspended. We would like to apologise to the homeless man and we are trying to make contact with him to offer help and support.’