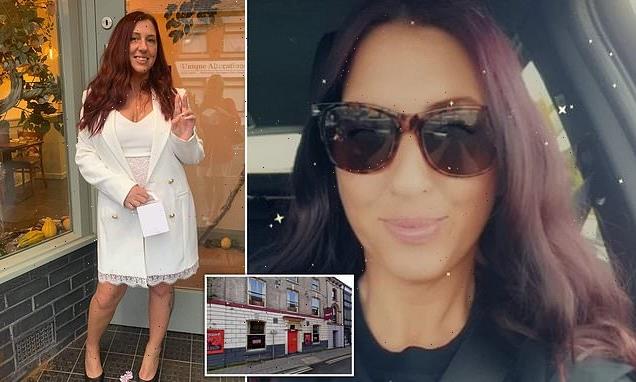 Mother, 38, who punched a bouncer in the face twice and ‘threatened to have him shot’ after she was refused entry to a nightclub is ordered to pay him £200 compensation

A mother-of-three was given 40 hours of unpaid work after punching a bouncer twice in the face after she was refused entry to a nightclub for being drunk, a court heard.

Cheryl Izzard, 38, struck Mason Eaves in the mouth with her fist, causing him pain and leaving him with swelling to his lip and tasting blood, in the early hours of Sunday, October 16.

Mr Eaves, who mans the door at Level nightclub in Warrington, Cheshire, also claimed Izzard – a cleaner at a rival club – said she would summon a gunman to shoot him unless she was allowed inside. She was arrested shortly afterwards.

At Warrington Magistrates Court, Izzard of Poplars and Hulme, Warrington, was said to be ‘extremely embarassed’ about her conduct as she admitted assault. She denied claims she had threatened to have Mr Eaves ‘gunned down’.

Emily Comer, prosecuting, said: ‘[Mr Eaves] states that they were aware of an issue with the defendant being refused entry. She was clearly intoxicated. She was asked numerous times to move back from the door but refused. 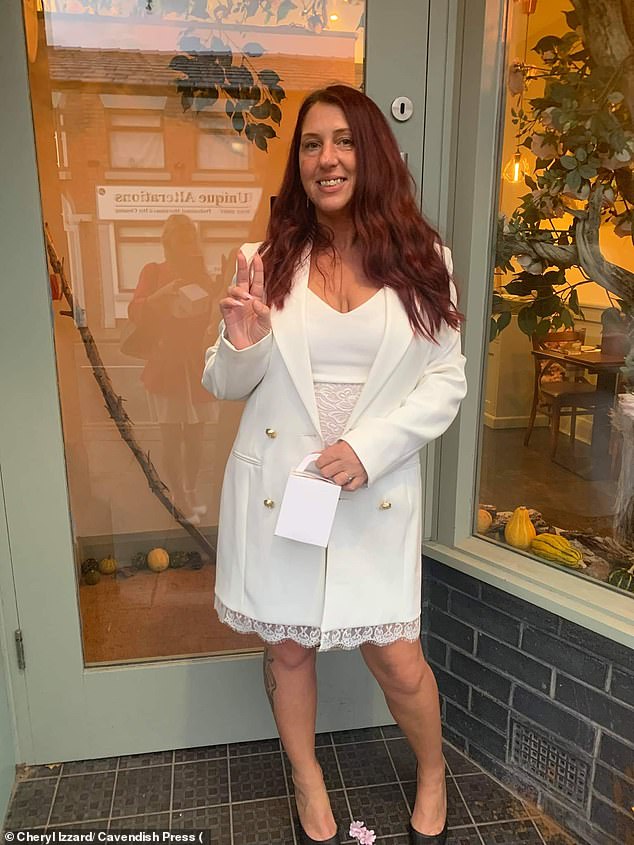 Cheryl Izzard (pictured), 38, struck nightclub doorman Mason Eaves in the mouth with her fist, causing him pain and leaving him with swelling to his lip and tasting blood, in Warrington, Cheshire, during the early hours of Sunday, October 16 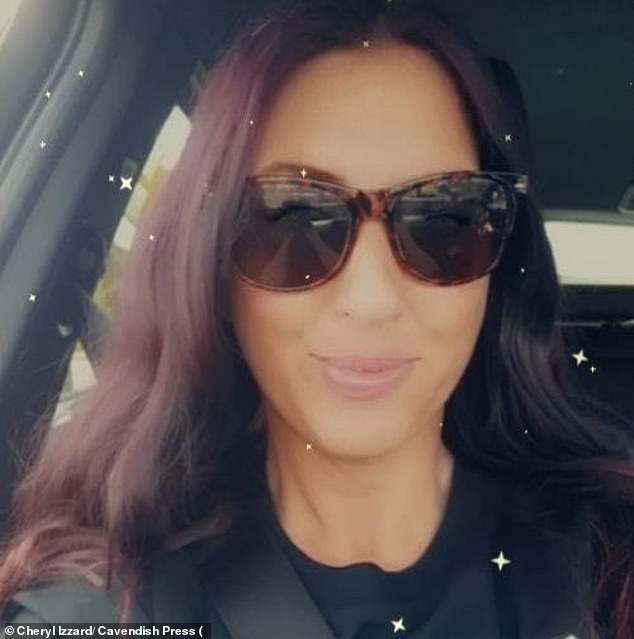 Mothe-of-three Izzard (pictured) appeared at Warrington Magistrates Court where she admitted assault but denied claims she threatened to have Mr Eaves ‘gunned down’. She was handed 40 hours unpaid work and ordered to pay £200 in compensation to the victim

‘She then punched the doorman to the face, making contact with his mouth.

‘He pushed her back slightly and she punched him again, in the same area as the last punch.

‘From both punches he said he felt pain and he had a metallic taste of blood in his mouth. It caused his lip to swell slightly.

‘He said the defendant threatened him to have him shot. She said she would bring someone down to shoot him.

‘The defendant was interviewed in relation to the offence. She stated she had gone to the town centre with a couple of friends from work. She had gone to Level to retrieve something from her partner who was inside.

‘She said she heard the door staff say something nasty to her friend. She couldn’t recall exactly what was said. She said she felt goaded.

‘She said the incident was a blur but she was aware that she had punched someone and kicked someone.

‘She said it was embarrassing and did not intend to hit the door man. She was remorseful and was extremely disappointed in herself.’ 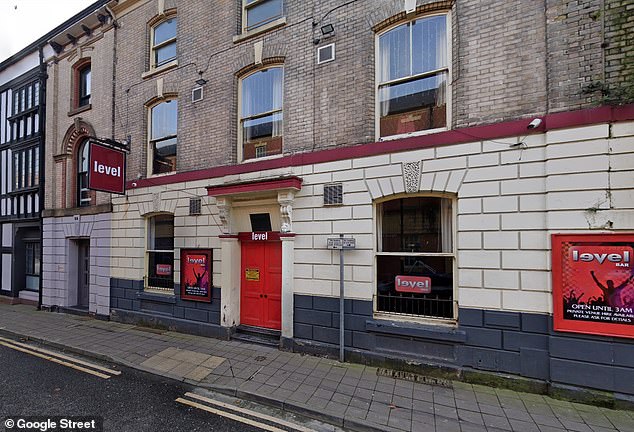 Izzard was said to have been enraged at being refused entry to nightclub Level in Warrington (pictured) for being drunk, when she lashed out at Mr Eaves

Izzard’s layer Jonathan Conder stressed that it was not accepted she had made threats to shoot the doorman. ‘She has not been charged in relation to that, with threats to kill and I ask that you disregard that comment,’ he said.

‘In police interview she expressed remorse and embarrassment about the incident. She consumed alcohol and she was taking medication at the time, which probably did not help.

‘She works for a local nightclub as a cleaner and knows quite a few door staff in the town.

‘She is extremely embarrassed and remorseful that she has got herself into this situation.

‘I would suggest it is very much out of character. She very rarely goes out, she has three children aged five, 10, and 21. She has two cleaning jobs and is a hard working person.

‘It is very unlikely that you will see the defendant before this court again.’

Mr Conder read from a reference by Izzard’s manager who said he was surprised to hear of the incident, which he thought was ‘totally out of character’.

‘I have known Cheryl for about six months,’ the manager said. ‘She has been employed in the nightclub as a cleaning supervisor.

‘She has proved herself to be honest and hardworking with high standards of excellence.’ 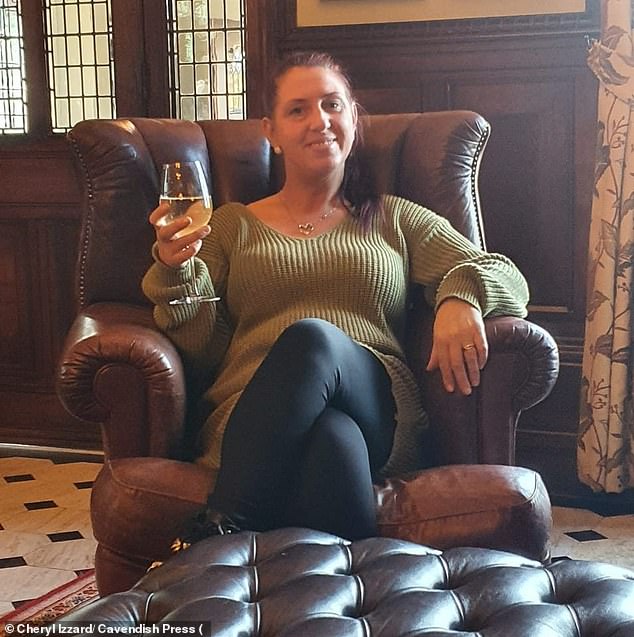 Izzard described herself as being ‘disgusted’ at what she did and having huge regret for the victim, her defence solicitor told the court

A probation service report said that Izzard had been mixing her drinks along with taking medication but fully accepted that her behaviour was ‘way over the top’ and that she hadn’t tried to justify her behaviour.

‘She describes herself as being disgusted at what she did and having huge regret not just for herself but for the victim,’ the report said. ‘She said he did not deserve it, regardless of what was said. It was totally unacceptable.

‘She says she has not behaved as the role model she wants to be for her children. She has three children, the eldest is 21 but the others are 10 and five, who live with her.

‘She is a single parent who presents as someone who wants to do the right thing for her children.

‘She has demonstrated a high level of victim empathy, and not just for the victim but for others who witnessed the incident. Not only was she punching but there were kicks involved as well.

‘Luckily there were no serious injuries caused by her actions.’

The magistrates sentenced her to 40 hours of unpaid work and made her pay £200 in compensation to Mason Eaves.