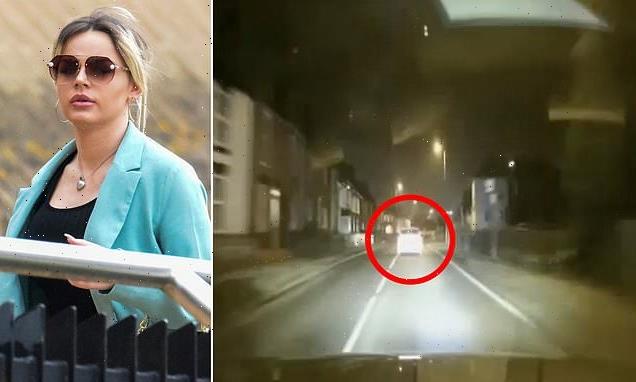 Shocking moment mother, 29, led police on 90mph chase with her two young children in the back of her BMW – speeding through red lights and careering onto the wrong side of the road

Shocking dashcam footage released today shows a single mother leading police on a 90mph chase and speeding through a town with her two young children in the back of her BMW.

Tegan Bulley avoided jail after overtaking an unmarked police car before racing off at 90mph, bombing through red lights and accelerating up the wrong side of the road as officers gave chase.

Careering through residential streets, she hit 70mph over speed bumps and nearly lost control before police had to slow down and lost her, a court heard.

Now dashcam footage shot by police has been released which shows the chase. 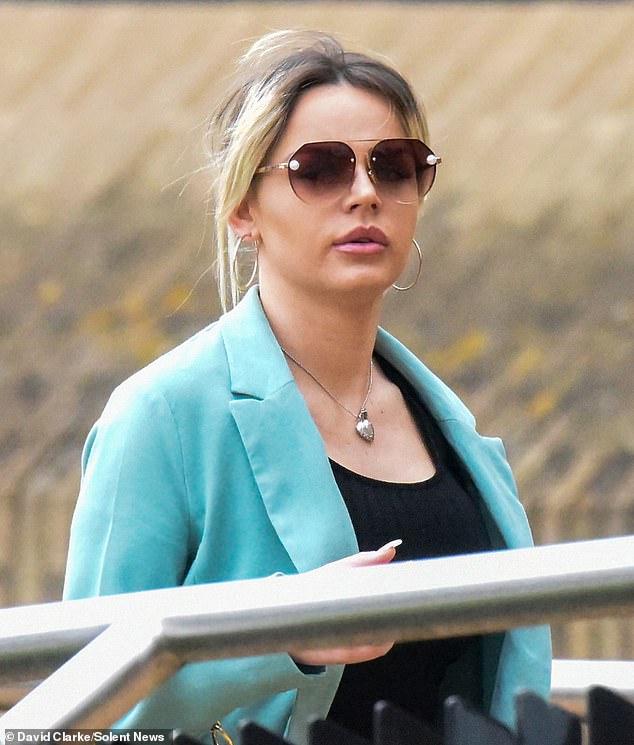 Tegan Bulley lead police on a 90mph chase and speeding through a town with her two young children in the back of her BMW. Pictured outside Southampton Crown Court

Police said she put her children, neither of whom were secured in child seats, at ‘considerable risk’ during the incident.

When the 29-year-old was eventually tracked down, she gave a false name to officers and claimed her white BMW 3 series had been stolen, before later pleading guilty to one charge of dangerous driving.

PC Theo McNulty of Hampshire Police Roads Policing Unit, today said: ‘The undue care shown is beyond belief. She not only put herself and her children at considerable risk, but the officers involved in the pursuit and other roads users at risk too. 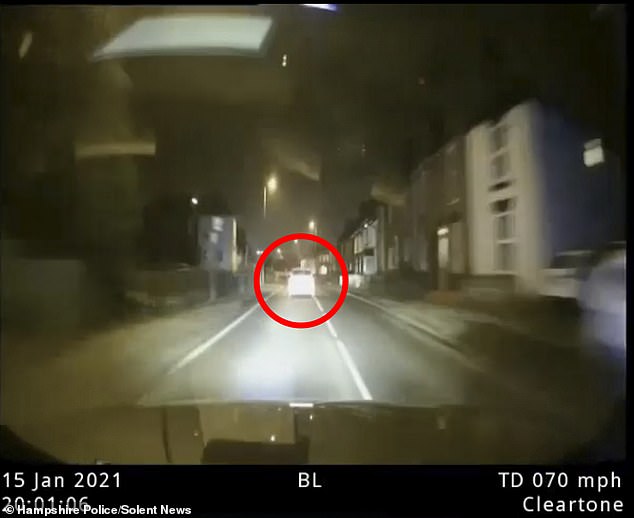 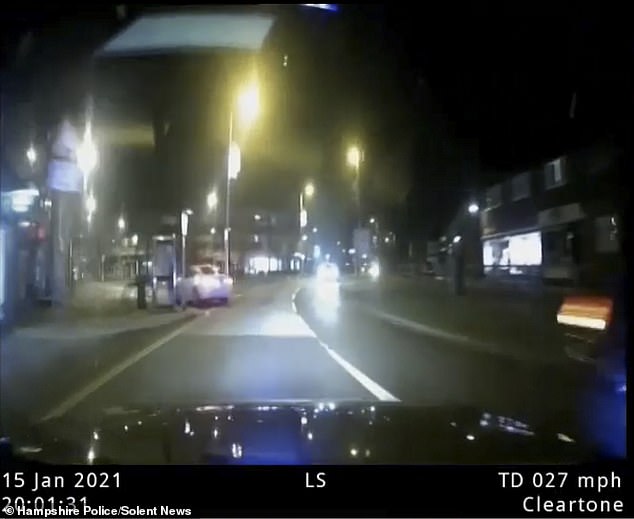 At one point Bulley was driving at speeds of up to 70mph over speed bumps, as police chased her in their unmarked car 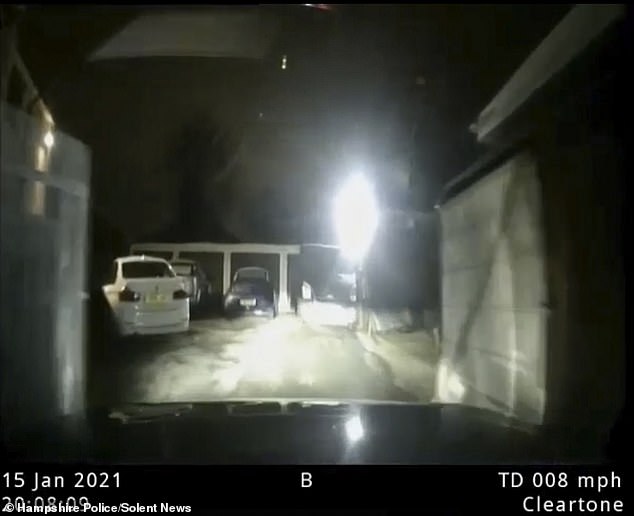 Police said she put her children, neither of whom were secured in child seats, at ‘considerable risk’ during the incident

‘Thankfully her actions did not result in a road traffic collision as I have no doubt that someone could have been seriously injured, or worse, fatally wounded.’

Judge Brian Forster QC handed Bulley an eight month sentence but suspended it for 15 months, before disqualifying her from driving for a year.

Siobhan Linsley, prosecuting, told the court police in an unmarked car first spotted Bulley speeding at about 7pm on a Friday evening in January last year, when she overtook them on the A336 on the outskirts of Southampton.

She said: ‘At the time the police car itself was going 40mph on a 40mph road – the maximum speed – when they were overtaken by a white BMW.

‘The police accelerated to keep up with her and the vehicle was doing 50mph at that point.’

After momentarily slowing down for a speed camera, Bulley ‘again accelerated’ and turned off the main road and into the town of Totton, heading towards the town centre at 40mph on 30mph roads.

Ms Linsley said the police ‘began to suspect that she wouldn’t stop’ so turned on their blue lights and siren, which prompted the BMW to slow and the passenger door to open momentarily before speeding off again.

The court heard police pursued Bulley through the 30mph residential area, as she pulled into other roads and T junctions ‘without any hesitation’.

Ms Linsley said at one point Bulley, of Southampton, Hants, was driving at speeds of up to 70mph over speed bumps.

Police continued to chase the BMW, which now reached speeds of 90mph, back to the A336, where Bulley drove through a red light and moved on to the wrong side of the road.

Ms Linsley said Bulley briefly pulled over and a man got out and ran off, before again ‘pulling away, accelerating to 60 to 70mph on a 30mph road’ and entering a roundabout on the wrong side of the road ‘without stopping to check for traffic’.

She added: ‘She was going so fast for the conditions that the back end of the BMW was spinning from side to side and the police officers got the impression that she very nearly lost control at that point.’

Concerned that the BMW was not going to stop, police stopped chasing her and then searched for the car in a slower patrol afterwards.

Police were pointed to the car and saw a woman nearby walking two young children in their nightwear but didn’t stop them.

Ms Linsley said CCTV showed this woman exiting the car with the two children, proving all three were passengers during the high speed chase.

The court heard the children were aged just five and eight and there were no child car seats in the BMW.

About 40 minutes after police found the vehicle, a black BMW arrived at the scene with police still there.

Bulley was sat in the back and gave a false name of Amy Greaves to the officers before admitting her real name.

She denied driving the car and said she had just been at a party and was getting a lift home. 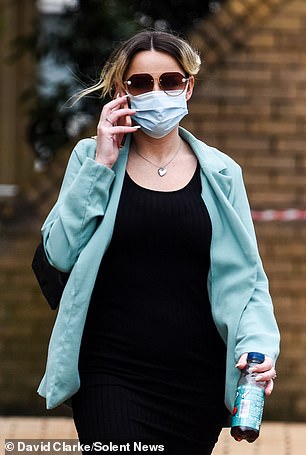 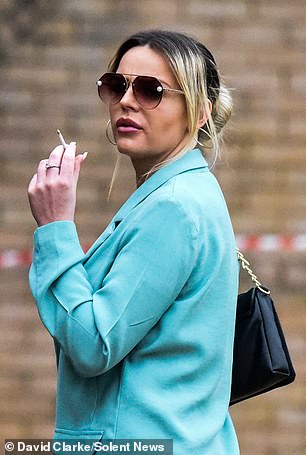 Careering through residential streets, Bulley hit 70mph over speed bumps and nearly lost control before police had to slow down and lost her, a court heard

When interviewed by police, Bulley said she was ‘at a friend’s house when she realised her car keys had gone missing’.

Asked why she initially gave a false name, she said she didn’t want to be a ‘grass’.

Bulley then pleaded guilty to dangerous driving at her first court appearance.

Khalid Missouri, defending, told Southampton Crown Court: ‘This is an appalling level of driving and a very serious matter.

‘She’s a single mother who lives with two children who aren’t straight-forward children.’

Mr Missouri said Bulley suffered from anxiety, had since lost a job as a contact supervisor for children’s services due to not now being able to drive, and is working part time as a waitress in a restaurant.

He said at the time she was in a long term relationship which became ‘quite controlling’.

Mr Missouri said: ‘That man was in the car with the two children. She didn’t realise at the time but he was wanted by police.

‘She attempted to stop but before she could he shouted at her to drive on and started to make threats about her children being taken away from her if she stopped.’

Bulley wept as she avoided an immediate prison sentence at Southampton Crown Court (pictured). Judge Brian Forster QC handed her an eight month sentence but suspended it for 15 months, also disqualifying her from driving for a year

‘You drove on the wrong side of the road, you drove through a red light and in reality you were doing everything in your power to get away from the police.

‘You had two children in the car aged five and eight, they were not restrained as they should have been.

‘This is a very bad case of dangerous driving.’

However, he decided to suspend the sentence because he deemed she was ‘vulnerable’ to the other man in the car who got out and ran off.

She was ordered to carry out 80 hours of unpaid work and 20 days with the probation service and also ordered to pay £10 a month for a year.

The judge added: ‘Please don’t ever put yourself in this situation [again], because if you do you put yourself at risk of having to serve the prison sentence.’