Mosul gets a makeover! During three years of ISIS rule, women were covered head to toe in black. Now botox injections, fillers and teeth whitening are the norm as beauty salons open

For three years, Mosul’s women were covered in black from head to toe and its men had to keep their beards long. Salons were shut, and plastic surgery considered a crime.

But more than a year after the Islamic State group’s ouster, the Iraqi city is flaunting its more fabulous side.

Need to zap away a scar or a burn? Cover up a bald spot with implants? Whiten teeth for a dazzling smile? Mosul’s plastic surgeons and beauticians are at your service.

Raji Najib, a Syrian living in Mosul, recently made use of the city’s aesthetic offerings. 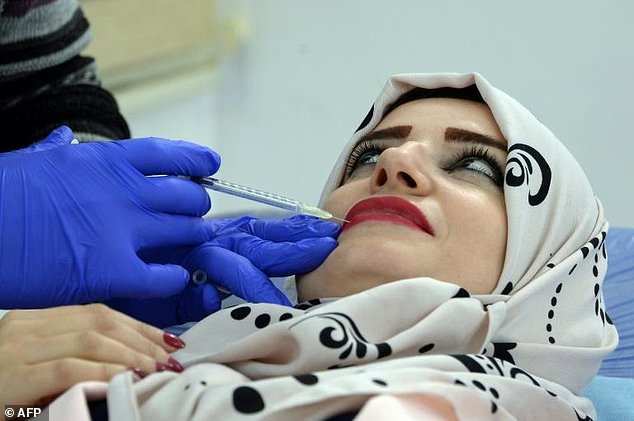 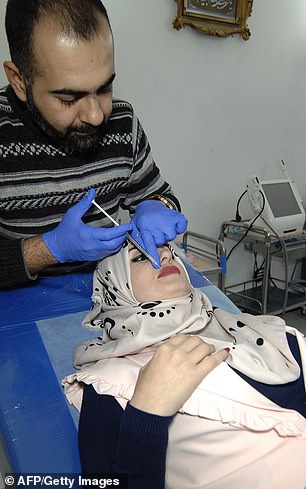 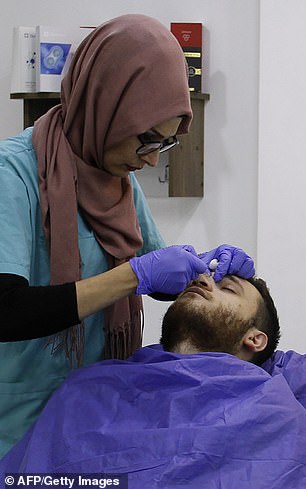 The 40-year-old had long been self-conscious of his bald spots, until his Iraqi friends told him what had worked for them — hair implants at a new clinic in their hometown.

‘They told me the equipment was modern, the nurses competent and the prices good,’ Najib said.

In Mosul, the average hair implant procedure costs around $800, including the follow-up after the operation.

Nearly 90 kilometres (50 miles) to the east in Iraq’s Arbil, or even further north in Turkey, the same operation costs at least $1,200.

Plasma injections to prevent hair loss cost around $63 in Mosul, but at least $20 more in Arbil.

In addition to the difference in price, Najib would have had to put up money and time for travel. 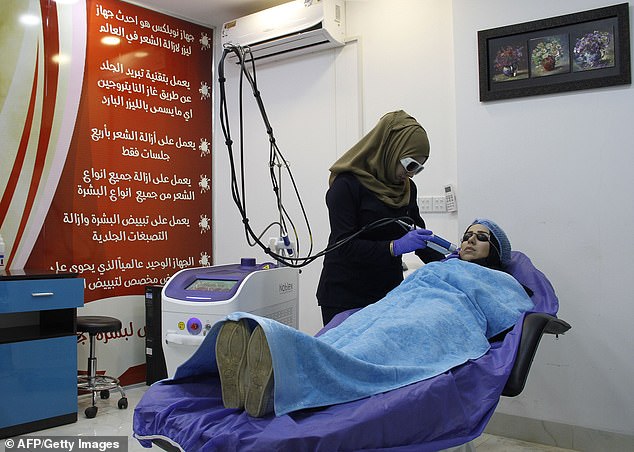 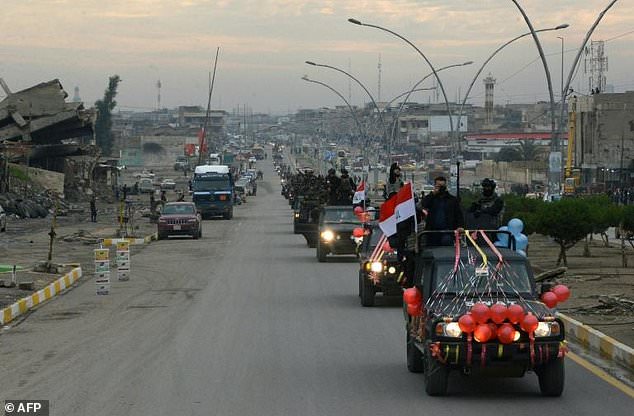 ‘Going to a clinic in Mosul is much easier, as I don’t have time to travel outside Mosul,’ he told AFP.

Decades ago, only one department in Mosul’s hospitals offered plastic surgery, and only to those who had a severe accident or were trying to eliminate a physical handicap from birth.

Mosul, and Iraq more broadly, have been shaken by waves of conflict since the 2003 US-led invasion that toppled Saddam Hussein and paved the way for a sectarian war.

Religious hardliners forced women to cover up or stay at home, and extremists in particular targeted hairdressers, many of whom closed their shops in fear.

Another shock came in 2014 when the Islamic State group swept across much of Iraq’s north, with the jihadists making Mosul their de facto capital.

The religious police of IS enforced ultra-strict rules on dress for all residents, making sure women showed no skin and men wore ankle-length capris and long beards, with no moustache. 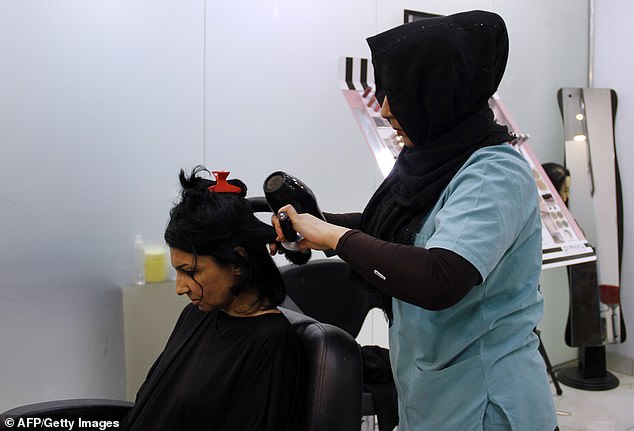 A hairdresser styles the hair of a customer at a beauty salon. Five beauty clinics are said to have opened up since ISIS were routed from the city 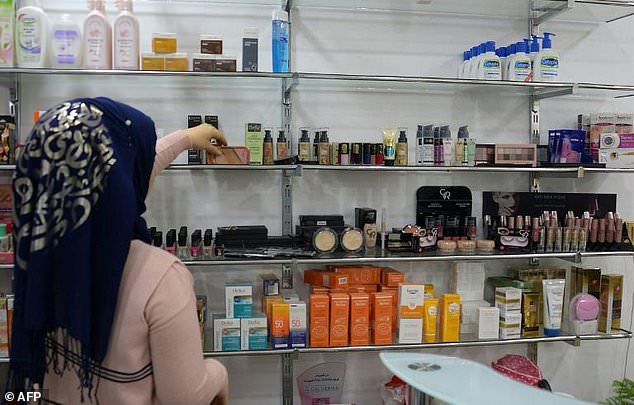 The religious police of IS enforced ultra-strict rules on dress for all residents, making sure women showed no skin and men wore ankle-length capris and long beards, with no moustache

The city has since gotten a makeover.

Five beauty clinics have opened since Mosul was recaptured last summer by Iraqi security forces, and they can hardly keep up with the flow of customers, most of them men.

Muhannad Kazem told AFP he was the first to relaunch his city’s beauty business with his clinic, Razan, which offers teeth whitening services and other dental care.

His secret? ‘The employees came from Lebanon, and the treatments and machines were imported,’ said Kazem, 40.

The city’s medical services were hit hard by IS’s three-year reign and the months-long battle to oust it. 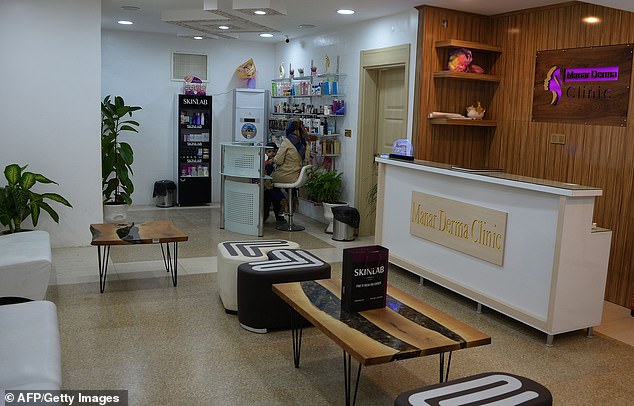 According to reports, the new beauty clinics can hardly keep up with the flow of customers 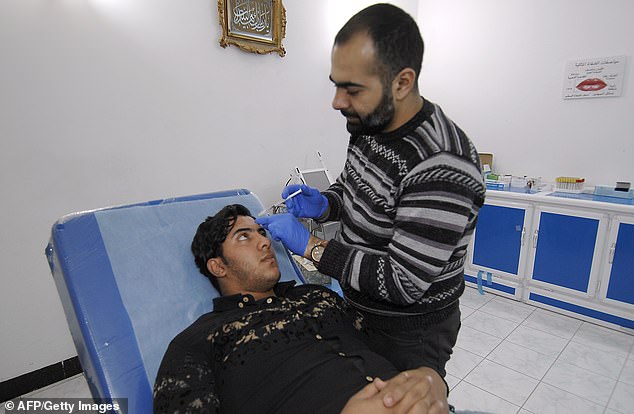 The available hospital beds in Mosul dropped from 3,657 before 2014 to just 1,622 last year, according to the local human rights commission.

But the city is rebuilding, and one new commercial centre houses the Diamond Dental Clinic in the bottom floor, with the Shahrazad beauty centre upstairs.

A poster at the entrance advertises what’s on offer: injections of botox and other fillers, slimming surgeries, dermatological operations, and more.

Inside the glossy interior are men and women alike, an unthinkable sight under the iron-fisted rule of IS.

A female employee carefully injected serums to prevent hair loss into the scalp of a woman gritting her teeth, one of the dozen customers streaming in per day.

Beautician Alia Adnan said the physical and mental impact of the jihadists on people in Mosul has been long-lasting.

‘They have hair or skin problems because of the stress and the pollution that Mosul’s residents were exposed to, both under IS and during the clashes,’ she told AFP. 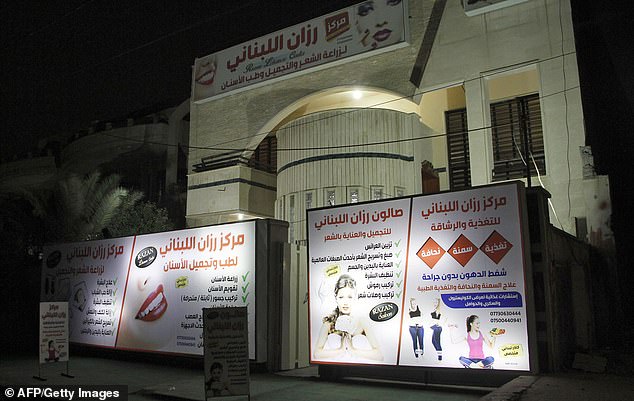