This is the moment a Morrisons driver just ‘makes it’ after swerving onto a motorway slip road at the last moment.

The driver is being investigated after dash camera footage shows him swerving across lanes so fast the wheels on his vehicle leave the road.

The reckless manoeuvre happened on November 26, at 6.45am on Britain’s busiest motorway, the M6 Northbound at junction 8 exit in West Bromwich, West Midlands. 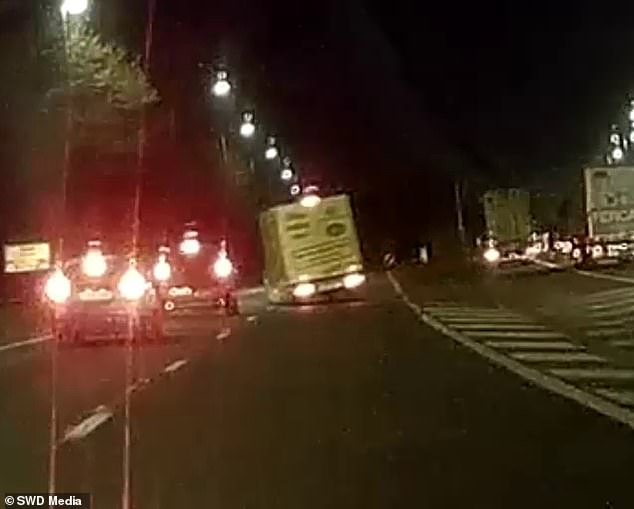 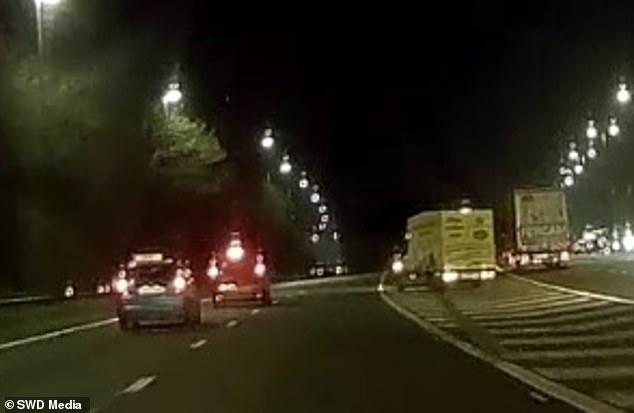 The van sped across the chevrons and towards two cars on the M6 Northbound at junction 8 exit in West Bromwich, West Midlands

As the clip begins the supermarket vehicle comes into view in lane 3, half a mile from the next junction, heading towards the M6 North West Wolverhampton.

The yellow Mercedes Sprinter has merged onto the slip road and joins lane one, but the driver swerves at the last possible moment across the white chevrons.

Indicating as he crosses the markings and slamming on his brakes, the vehicle almost topples over due to the speed its going and the camber of the road.

It slides across two lanes and swerves into the path of other motorists, narrowly avoiding crashing into one.

Other cars on the road are forced to brake to avoid the vehicle and footage ends with the Morrisons driver stationary on the hard shoulder.

Wishing to remain anonymous the dash cam driver shared the footage of the incident online, with social media users joking about the video.

Arthur Morgan commented: ‘He was probably late delivering someone’s food that’s why they are speeding.’

Karl Newsome added: ‘Pulled over to put the groceries back in the baskets.’

Edmund King, AA president, said: ‘This is a classic and very dangerous case of a ‘swooper’ – the driver that cuts across to exit at the very last minute.

‘If it wasn’t for the excellent anticipation and rapid braking reactions of the two drivers already on the slip road, this could have caused a catastrophic crash.

‘If drivers find themselves in the wrong lane to exit safely then they should continue to the next exit rather than endangering lives by cutting across lanes and chevrons in an illegal and reckless manoeuvre.’

A Morrisons spokeswoman said: ‘We are currently investigating this issue and appropriate action will be taken with this driver.’

West Midlands Police confirmed they couldn’t find any record of the incident being reported to them.