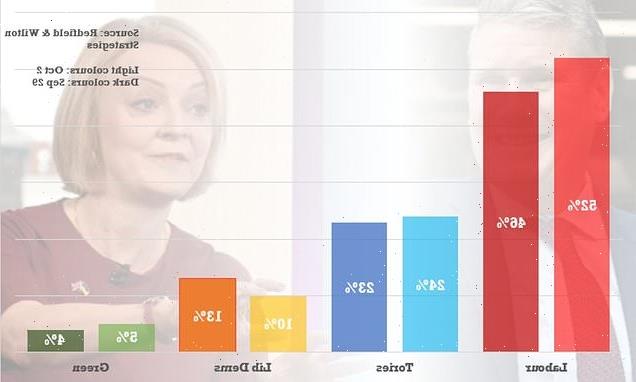 More polls showed Labour with massive leads tonight after ‘mini-Budget’ triggered mayhem on the markets and fears over mortgages spiralling out of control.

Research by Redfield & Wilton Strategies found a staggering 28-point advantage, with Keir Starmer’s party backed by 52 per cent of the public.

That was up six points on last week, while the Conservatives were down five on just 24 per cent.

Worryingly for Liz Truss, less than a month after she entered No10 she was 14 points behind Sir Keir on who would make the best PM – a worse rating than Boris Johnson during Partygate.

A separate survey by Savanta was nearly as bad, recording a 25-point gulf between the main parties. Both would be enough for a huge Labour landslide, and come hot on the heels of others suggesting the divide is as much as 33 points.

The grim findings came as Kwasi Kwarteng tried to laugh off the extraordinary climbdown on plans to scrap the top rate of tax – which came after the polls were conducted – as he delivered his Tory conference speech. 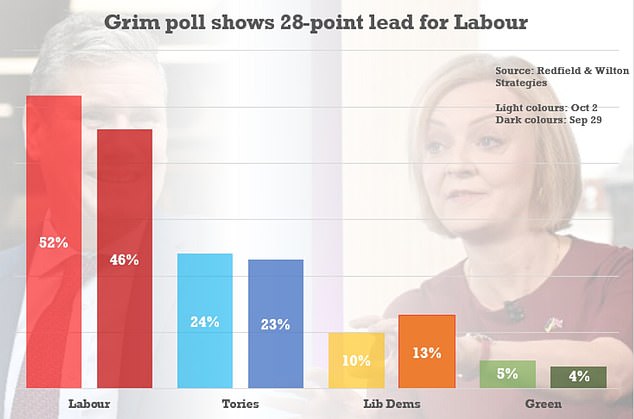 Research by Redfield & Wilton Strategies found a staggering 28-point advantage, with Keir Starmer’s party backed by 52 per cent of the public 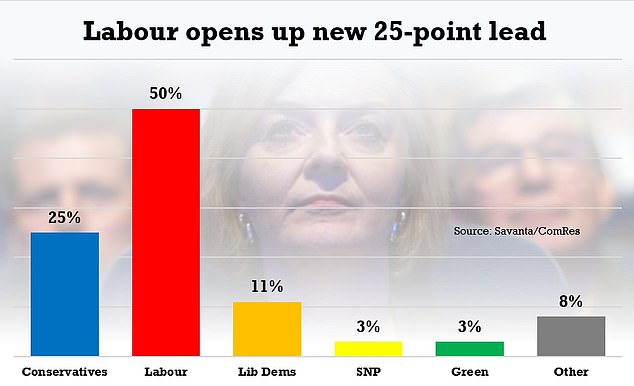 A separate survey by Savanta was nearly as bad, recording a 25-point gulf between the main parties

The Chancellor quipped ‘what a day’ as he started his address to the party faithful in Birmingham – before appealing for them to ‘move on’ with ‘no more distractions’.

His appearance came after a tumultuous 24 hours in which the Chancellor and Prime Minister Liz Truss had first defended their decision to abolish the 45p top income tax rate and then capitulated in the face of widespread opposition and reinstated it.

Mr Kwarteng has had to tear up his text after the intense political drama overnight that saw him drop the commitment for people earning more than £150,000 a year, after it became clear dozens of MPs would refuse to back the move in the Commons.

But watched by the PM, he swiftly went on the attack this evening as he swiped at the ‘slow managed decline’ under his predecessor Rishi Sunak.

‘What a day. It has been tough but we need to focus on the job in hand,’ he said.

‘We need to move forward. No more distractions. We have a plan and we need to get on and deliver it. That is what the public expect from the Government.’

He sought to portray the Conservative Party as ‘serious custodians of the public purse’, saying: ‘There is no path to higher sustainable growth without fiscal responsibility.

‘Conservatives have always known this and we know it still. And it is because we are Conservatives that we remain absolutely committed to being serious custodians of the public purse. This is what defines us and separates us from the Labour Party.’ 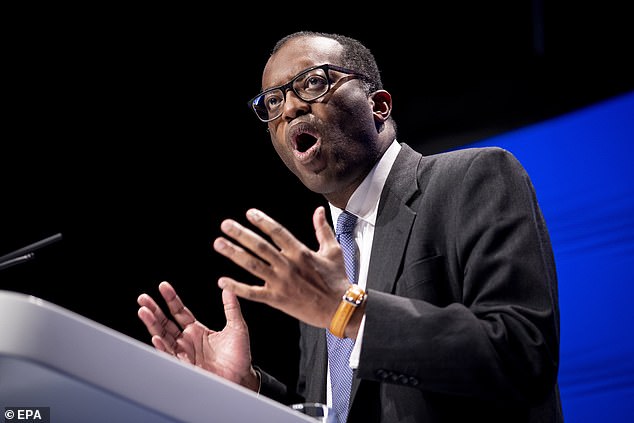