Washington: It was one of the most dramatic moments in a presentation filled with them: just before then president Donald Trump went onstage near the White House last year and urged his supporters to “fight like hell” and march on the Capitol, an aide testified, he was told that some of them were armed.

It was also a potentially consequential moment for any prosecution of Trump, legal experts said. Knowing that his crowd of supporters had the means to be violent when he exhorted them to march — and declared that he wanted to go with them — could nudge Trump closer to facing criminal charges, legal experts said.

“This really moved the ball significantly, even though there is still a long way to go,” said Renato Mariotti, a legal analyst and former federal prosecutor in Illinois.

A video of former US president Donald Trump displayed on a screen during the hastily arranged hearing. Credit:Bloomberg

The extent to which the Justice Department’s expanding criminal inquiry is focused on Trump remains unclear. But the revelations in the testimony to the House select committee by Cassidy Hutchinson, a former White House aide, both provided new evidence about Trump’s activities before the January 6, 2021 assault on the Capitol and chipped away at any potential defence that he was merely expressing well-founded views about election fraud.

“There’s still a lot of uncertainty about the question of criminal intent when it comes to a president, but what just happened changed my bottom line,” said Alan Rozenshtein, a former Justice Department official who teaches at the University of Minnesota Law School. “I have gone from Trump is less than likely to be charged to he is more than likely to be charged.”

A spokesman for Attorney-General Merrick Garland declined to comment on Hutchinson’s testimony — although one of Garland’s predecessors did weigh in.

“The department is clearly looking into all this, and this hearing definitely gave investigators a lot to chew on,” said William Barr, who resigned as attorney-general under Trump after saying publicly weeks after the election that there was no evidence of fraud widespread enough to have changed the race’s outcome.

During her testimony to the panel, Hutchinson recounted a conversation she had on January 3 with Pat Cipollone, the top lawyer in the White House. Hutchinson described how Cipollone worriedly pulled her aside that day after learning that Trump was considering marching with his supporters to the Capitol after his speech near the White House on January 6 — a decision, he suggested, that could have major consequences.

“We’re going to get charged with every crime imaginable,” Cipollone said, by Hutchinson’s account. 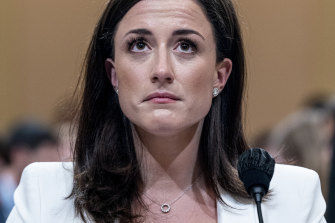 One of the crimes Cipollone was concerned about, Hutchinson recounted, was the same one the committee had accused Trump of committing in a court filing this spring: the obstruction of a congressional proceeding — namely, the certification of the Electoral College vote inside the Capitol.

A federal judge in a civil suit related to the House committee’s work also concluded this year that Trump and one of his legal advisers, John Eastman, most likely had committed felonies, including obstructing the work of Congress and conspiring to defraud the United States, through their efforts to block certification of the Electoral College results.

According to Hutchinson, another potential crime that worried Cipollone was incitement to riot. That offence, while simpler in theory than obstruction, requires prosecutors to reach a high threshold of evidence and prove that a defendant’s words presented an immediate threat of lawlessness or danger.

Some legal scholars said Hutchinson’s testimony made the best case to date that Trump had in fact incited the crowd.

“Until this point, we had not seen proof that he knew about the violence,” said Daniel Goldman, a former federal prosecutor who served as the lead counsel during Trump’s first impeachment. “The testimony made very clear he was not only entirely aware of the threat, but wanted armed people to march to the Capitol. He was even willing to lead them.”

Earlier this year, a federal judge in Washington, ruling that a group of civil lawsuits claiming that Trump was liable for the violence on the day could go to trial, also suggested that the former president had incited the crowd that heard his speech.

In his ruling, Judge Amit P Mehta found that after months of creating an “air of distrust and anger” by relentlessly claiming that the election had been stolen, Trump should have known that his supporters would take his speech not merely as words, but as “a call to action”.

Mehta also ruled that Trump could reasonably be held accountable for having aided and abetted those who assaulted police officers during the Capitol attack.

After 18 months, the Justice Department’s investigation of the Capitol attack has resulted in more than 840 criminal cases being filed against rioters on charges ranging from misdemeanour trespass to seditious conspiracy.

In recent days, the inquiry has accelerated with a flurry of search warrants and subpoenas going out, implicating some of Trump’s top allies in key swing states and at least two lawyers, Jeffrey Clark and Eastman, who worked on separate but related plans to stave off his defeat in the 2020 election.

Still, it remains unknown if prosecutors are looking directly at Trump’s own involvement in subverting the election or inspiring the mob that wreaked havoc at the Capitol.

While the House committee has always reserved the right to recommend that Trump be charged, it was revealed this month that the panel and the department have been at odds over the transcripts of interviews with witnesses like Hutchinson, with top department officials complaining that by withholding as many as 1000 transcripts the committee is hampering the work of making criminal cases.

Another matter that remains unknown is whether Hutchinson has spoken with federal prosecutors about what she saw and heard inside the White House on the day and the days leading up to it.

The department has already charged more than 220 rioters with the obstruction count, which requires proving that a defendant knowingly and corruptly interfered with the work of Congress.

Some legal scholars have suggested that Trump could defend himself against the charge by arguing that he did not intend to disrupt the work of Congress through any of his schemes, but rather was acting in good faith to address what he sincerely believed was fraud in the election.

Violent insurrectionists, loyal to then president Donald Trump, storm the Capitol in Washington to try to stop the certification of Joe Biden’s election win.Credit:AP

But even those experts who once gave credence to this defence felt that the new accounts revealed this time chipped away at the possibility that Trump could claim wilful blindness.

All month, the House committee has been laying out a detailed argument for why Trump should be charged with crimes at a series of public hearings. The presentations have depicted Trump as being personally involved in multiple efforts to strong-arm state lawmakers, Justice Department officials and even Mike Pence, his own vice president, into machinations that would have kept him in the White House.

Those machinations included a plot to create false slate of electors declaring that Trump had won the election in states that were actually won by Joe Biden, and a subsequent effort to persuade Pence to use the phoney slates on January 6 to subvert the normal workings of the Electoral College and single-handedly declare Trump to be the victor.

What Tuesday’s hearing added was a cinematic account of Trump’s connection to the violence at Capitol.

“This is a dramatic last piece that enriches the story,” said Daniel C Richman, a law professor at Columbia University. “But it’s not clear that it changes the fundamental question of criminal liability.“