A brazen moped delivery driver has been caught stealing a number plate from a motorbike in London.

The takeaway thief was filmed on home security footage unscrewing the plate from the parked vehicle in North Kensington.

When a vehicle approaches he jumps up and pretends to stroll along the pavement until the coast is clear – before bending back down to unscrew the other side of the plate. 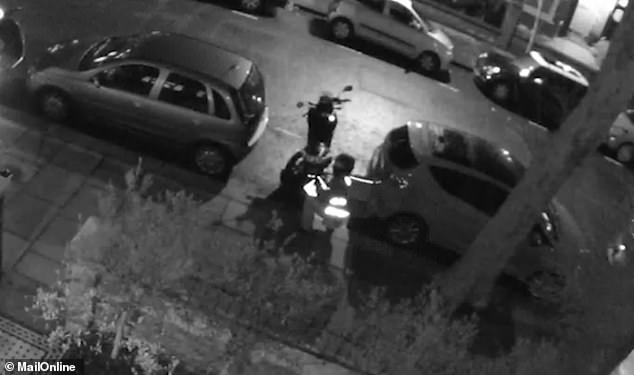 He then hops back on his scooter and drives away during the incident last Monday.

The theft was caught on camera by the 46-year-old owner of the bike.

He said: ‘I was at home and my security camera triggered an alert outside my house and recorded the driver stopping outside my neighbours’ house.

‘He got off and stole my motorbike number plate from outside my house and got back on his scooter and drove away with it.

‘The driver obviously wanted to speed and drive through red-lights without reproach. 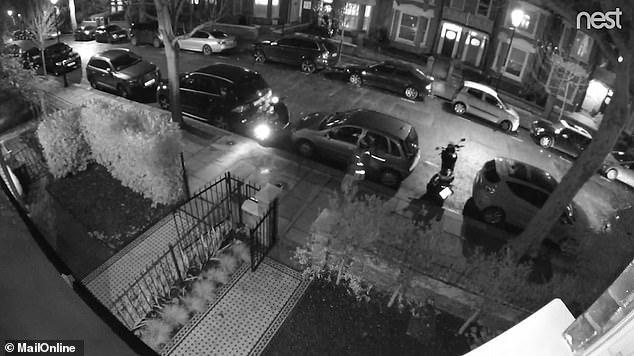 After seeing a car coming, he gets up and pretends to stroll along the pavement while the licence plate hangs by one screw 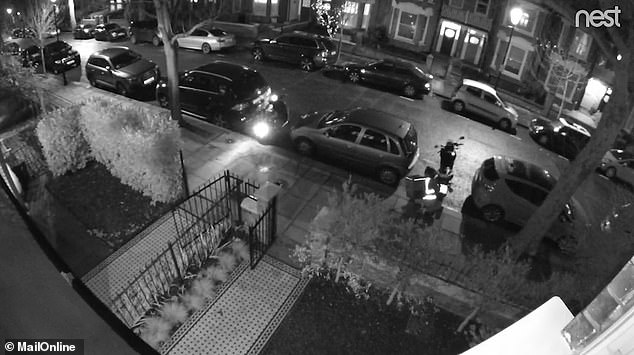 ‘I reported it to Deliveroo and the police. Police have closed case saying nothing can be done. Deliveroo said it was investigating but have so far come back with nothing.’

A Deliveroo spokesman said: ‘I have reviewed the CCTV footage and the rider shown is wearing an Uber Eats bag and jacket, not Deliveroo.

‘As you can see the Uber Eats bags a have a distinctive reflective stripe around the top of the bag that reflects in the CCTV image.

‘Obviously we should have gone back to the member of public more quickly to explain this and offer out assistance. I will ensure someone speaks to them today.’

MailOnline has approached UberEats and Met Police for comment.