Sculptor Keisuke Aiso, 43 says he feels “responsible” for terrifying children after his work was hijacked by online sickos who used it in the so-called 'Momo Challenge.' 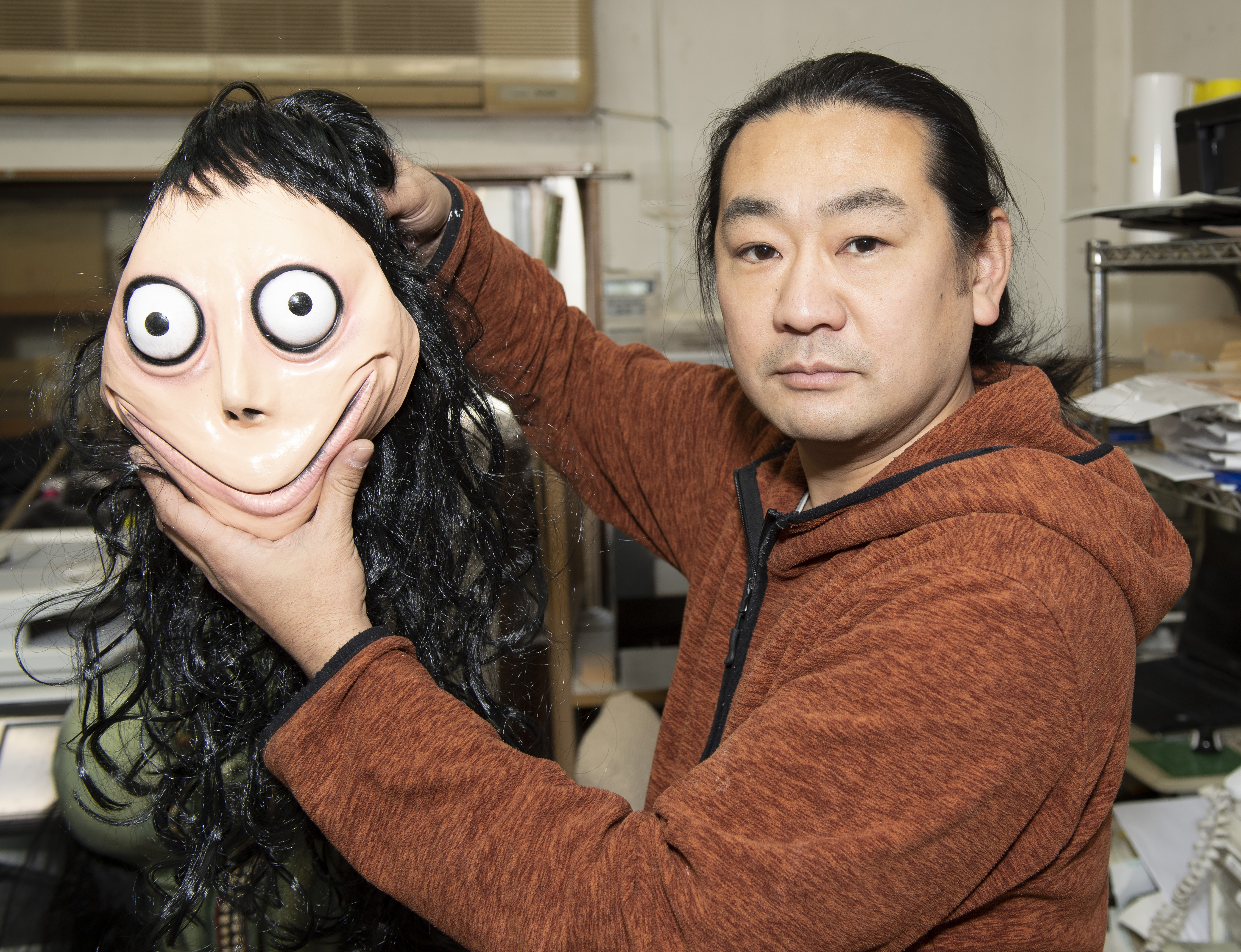 But he told The Sun that kids should be reassured and not to worry as Momo is DEAD.

We tracked him down to his workshop on the outskirts of Tokyo in Japan, where he said: “It doesn’t exist anymore, it was never meant to last.

“It was rotten and I threw it away.

“The children can be reassured Momo is dead – she doesn’t exist and the curse is gone.”

The model, which was made out of rubber and natural oils, was binned last autumn.

All that is left is an eye used on the work, which he plans to recycle on a new model.

He also has a cheap moulded mask of the Momo which a pal bought for him after visiting Mexico where his ghoulish figure was being used to celebrate the day of the dead.

The original work called Mother Bird was built in 2016 and exhibited at an alternative art gallery in the Japanese capital.

But after snaps of the bird woman were posted online it morphed into the challenge after sick individuals edited the face into children’s YouTube videos.

The Sun has found Momo's disturbing face appearing in the middle of Peppa Pig programmes aimed at little kids.

Using a computerised voice, the ghoulish character issues horrific threats to whoever has clicked on the video. 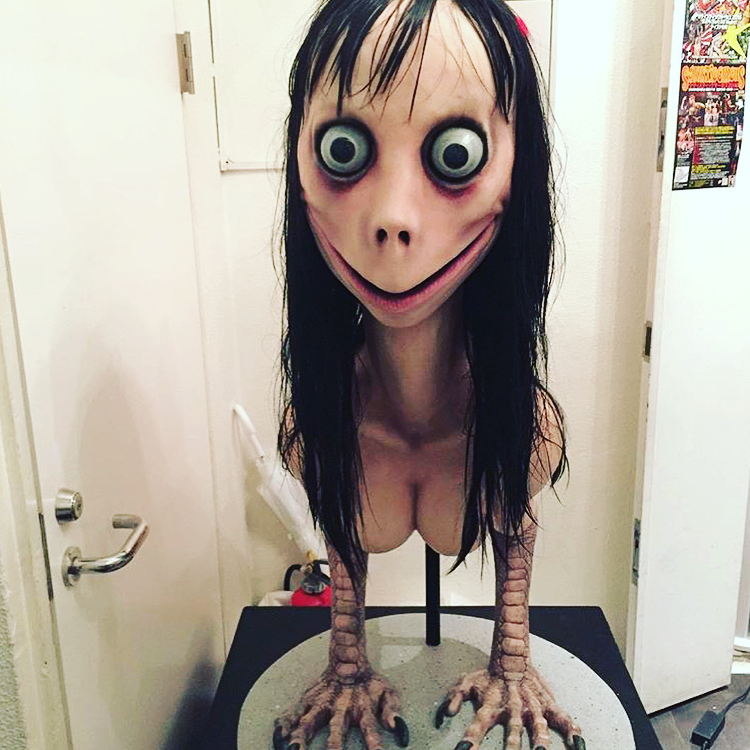 Although there were suggestions that youngsters had harmed themselves or others after watching the footage, kids charities have said there is no evidence of harm being done.

However children have been left terrified by the face, with schools and the government issuing advice to parents over the clip.

But Aiso says that although he is upset about the pain he’s caused to children, he is glad his work has been seen over the globe.

He added: “I have mixed feels about the people who have done this.

“On one hand they have caused me nothing but trouble, but on the other hand as an artist I have a little sense of appreciation that my art piece has been seen across the world.

"I guess I have to be grateful in that sense.

“I created this artwork three years ago and at the time when it was exhibited at the gallery it did not receive much attention, so at the time I was very disappointed.

"So when Momo first appeared, it was good in a way that it had received some attention. I was pleased.

“But the way that it has been used now is very unfortunate.

"People do not know if it is true or not but apparently the children have been affected and I do feel a little responsible for it.

“I feel like I am in trouble but it’s all out of my hands. 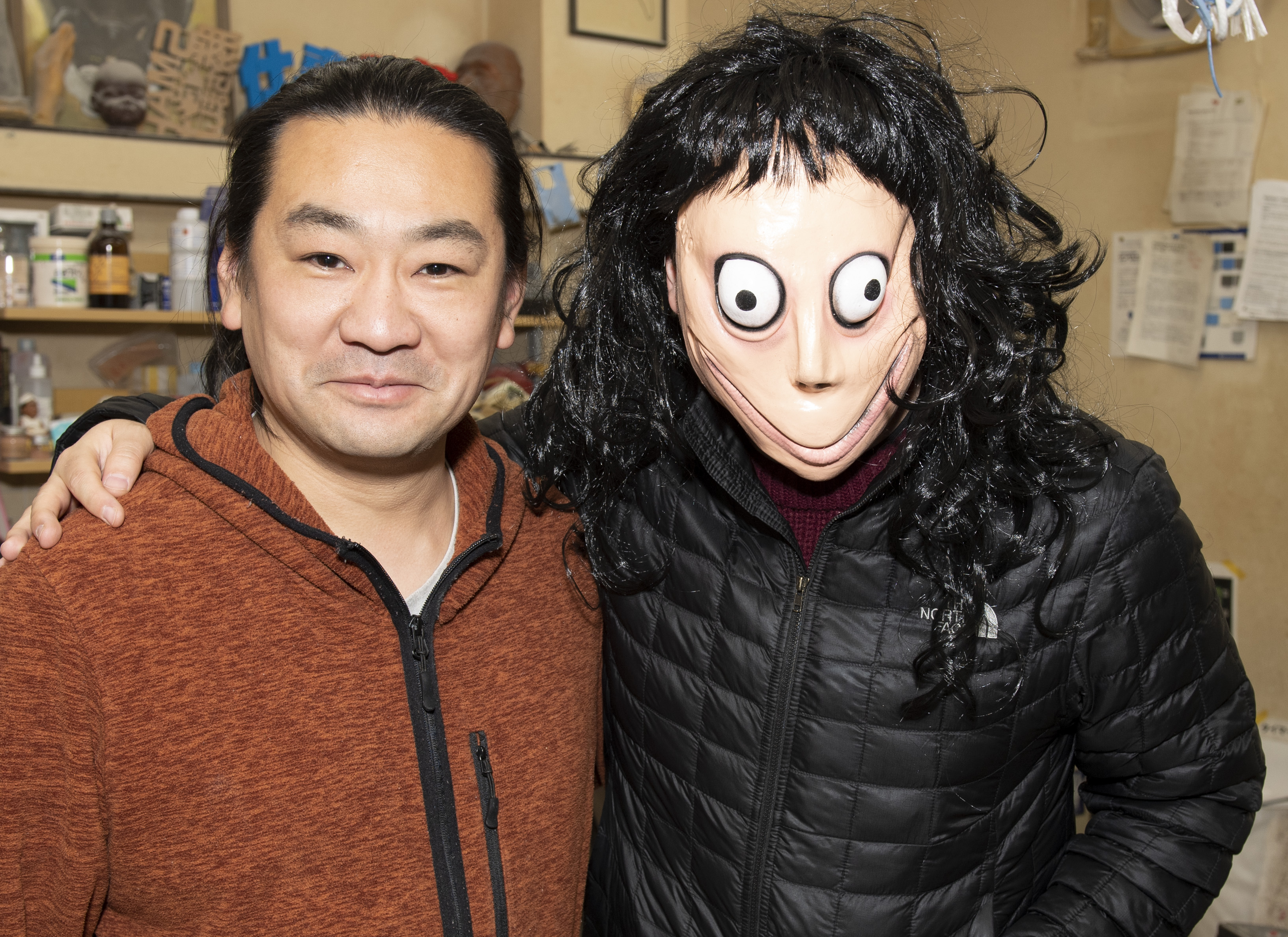 “And because it was out of the country and abroad I felt that it would pass, and I did not want to add fuel to the fire.

“It was not my masterpiece, so I’ve been surprised that it’s known around the world.”

He admits the sculpture, which features the head and naked torso of a traumatised woman, and a bird, is terrifying.

The artist was inspired by a Japanese ghost story about a lady who dies in childbirth and emerges as a bird woman to haunt the area where she died.

In local folklore, the woman appears cradling a baby and tries to hand it to strangers before disappearing before the baby turns into sticks or rocks.

Aiso, who also makes models for TV shows, said: “When I created the piece – I will be honest – I had every intention to scare people.

It is a monster, that’s what I do I make scary things, either using make-up or models

"It is a monster, that’s what I do I make scary things, either using make-up or models.

“It is a ghoul, about the death of a woman in childbirth, in a way its reason for being is to scare children but it wasn’t supposed to be used in the way it has.

“It was never meant to be used to make children harm themselves or cause any physical harm.”

Aiso told us he became aware that his creation had been hijacked last year, weeks after he had binned the model.

He added: “I know Momo appeared six months ago in South America, but it has come back this week so much, it’s been bigger and there has been more attention this time.

SAFETY NET: How to keep your child safe online

The Internet can be an amazing tool to help children learn and play.

But with the digital world changing all the time, how can you make sure your child is safe?

Talk to your children

“I threw it away and a week after the whole thing blew up.

“It was falling apart, so it’s probably for the best.

"If you’d have seen it in the state it was in, it would have probably looked even more terrifying.

“I have no regrets that it is gone.

“I don’t really care that they changed the name though.”

Aiso spoke from his studio in the suburbs of Tokyo, which sits on a quiet residential street opposite a school football pitch.

FOR KIDS: How to say no

1) Say it with confidence:
Be assertive. It’s your choice and you don’t have to do something which makes you feel unsafe or uncomfortable.

2) Try not to judge them:
By respecting their choices, they should respect yours.

Any child worried about peer pressure or online worries can contact Childline on 0800 1111.

His nightmare factory is littered with half finished models, prosthetic limbs and other ghoulish creatures, which he has been creating for over 20 years.

He told The Sun that a lot of his inspiration comes from horror films.

Aiso said: “I’ve always like scary movies and I was a generation where horror movies were big here.

“It inspired me to work on this type of art and make models for films.

“I have so many favourites, but Texas Chainsaw Massacre is probably my favourite.”

Aiso revealed that he and other artists who work in the Tokyo area have received death threats because of the sick suicide challenge.

He said: “Another artist was mistaken for the creator and she has received death threats and disturbing messages online about the work.

“I feel bad for her, but now I am getting the messages too. They say I will kill you and you should die, in both English and Japanese.

“I feel bad that she has been mistaken for me.”

Is the Momo Challenge a hoax?

The creepy face of a Japanese sculpture was hijacked and spread on WhatsApp – reportedly with instructions enticing children to perform a series of dangerous tasks including self-harm and suicide.

In recent days police and schools have issued warnings about the challenge arriving in the UK and a number of parents have said their children have been exposed to it.

Commons Leader Andrea Leadsom even told MPs the Government is "extremely concerned" about it.

But confusingly UK charities and internet experts have suggested the challenge is a hoax.

The Samaritans and the NSPCC said there is no confirmed evidence anyone has come to physical harm.

And YouTube claimed: "We have found no evidence of videos showing or promoting the Momo challenge on YouTube."

While it appears the challenge itself may not have reached Britain, sick copycats have been traumatising children by splicing a ghoulish video of a bug-eyed girl into Peppa Pig cartoons and Fortnite gameplay footage.

The Vanilla Gallery in downtown Tokyo spoke about the abuse they received after they displayed the scary sculpture back in 2016.

Yoko Taguchi from the gallery said: “Every summer we hold an exhibition about Japanese ghosts stories and his piece was for that.

“Usually we stop people from taking any pictures in the gallery, but for this exhibition the Mother Bird was placed in the entrance and we allowed people to pose with it.

“We were really shocked when we found out that someone had taken this photo and used it in this way without his permission.

“After it went big the artists at the gallery have been receiving death threats, and the whole thing has been so disturbing.

“It was never our intention for it to be used for this purpose.”

If you are affected by any of the issues raised in this article, the Samaritans can be contacted on 020 7734 2800