A paedophile dubbed ‘Wales’ most wanted man’ who spent more than five years on the run has been caught hiding behind a false wall in a flat.

Brian Ward, who was described as one of the UK’s most wanted men by Crimestoppers, was arrested in Cardiff Bay on Thursday, December 6.

He fled during his trial at Newport Crown Court in November 2013, which went on to find him guilty in his absence of gross indecency and indecent assault.

The 62-year-old from Pontyclun, also had links to Aberdare, Newport, London and Malta.

He has also been known to use alias surnames such as Wood, Cordina, Bryant, and Rose.

An officer was searching a flat in Cardiff on December 6 when he heard Ward’s voice coming from somewhere in the property.

The officer called a phone linked to the paedophile, which could be heard ringing nearby. 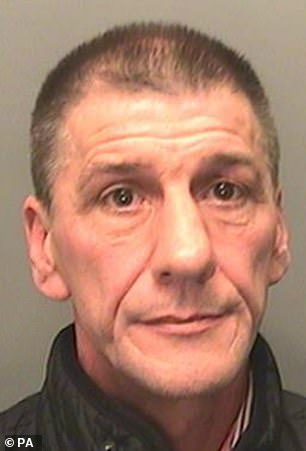 Brian Ward, who was described as one of the UK’s most wanted men by Crimestoppers, was arrested in Cardiff Bay last Thursday

Body-cam footage taken by the officer showed him pulling a bedroom mirror away from a wall to reveal Ward cowering in a room behind it.

The officer shouts ‘out you come’ before Ward comes into view and is told to get on the floor.

The criminal was arrested at the scene and appeared at Cardiff Crown Court on Wednesday where he was told he had been convicted of gross indecency with a child under 16 and four counts of indecent assault on a female.

His sentence of five years and 20 weeks was read out before him.

Superintendent Ceri Hughes said: ‘We’ve been looking for Brian Ward for some time. He evaded us for far longer than we would have liked but he is now in custody where he belongs.

‘He didn’t want to face justice for what he had done and was clearly angry that he’d been caught. He tried absolutely everything to avoid capture, showing no remorse for his appalling actions years ago.

‘Our search for suspects only ends when they are in custody, no matter how long it takes.

‘I really hope the news that he is now in prison will enable his victim to have some closure on what has had such a negative impact on their life.’