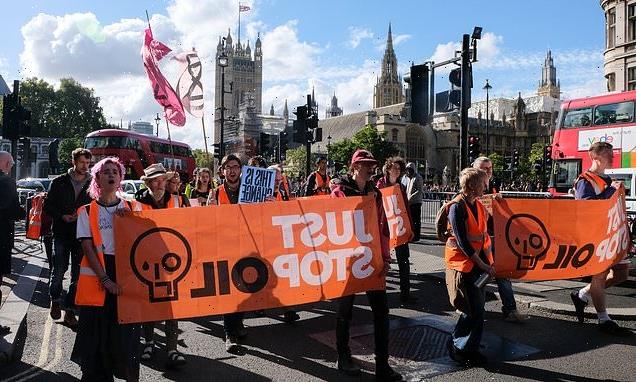 An angry motorist ripped banners from the hands of Just Stop Oil protestors as they staged sit-ins on London’s streets today, in the eighth day of action by the environmental activists.

The man told the protestors to ‘leave the road’ as he took the orange posters from their hands, earning him a round of applause from a passer-by.

The latest sit-down during the week of action saw some protestors gluing themselves to the road to hinder attempts to remove them, as they continue to demand the Government stops new oil and gas projects.

The group said today: ‘Our supporters will be returning – today, tomorrow and the next day – and the next day after that – and every day until our demand is met: no new oil and gas in the UK.’

Scotland Yard confirmed this evening that there were 24 arrests made in relation to the Just Stop Oil protests today.

A spokesperson added: ‘Protestors blocked Edgware Road/Upper Berkeley Street and Marylebone Road/Baker Street. Both roads were quickly reopened once the protestors had been safely removed.’

Just Stop Oil activists also joined members of Animal Rebellion (AR) to march down Pall Mall, in the City of Westminster, in a bid to draw attention to the climate crisis.

AR campaigners also poured red paint inside Farlows, a hunting and fishing shop on Pall Mall, and daubed paint on the windows of William Evans, a shooting supply shop in nearby St James’s Street, while others took and emptied milk from supermarkets.

The group, an offshoot of Extinction Rebellion, describes itself as a ‘mass movement using non-violent civil disobedience to call for a just, sustainable plant-based food system’.

After putting out a message ‘calling all vegans to occupy London’, AR said protesters brought London’s West End ‘to a standstill’ as people marched from Green Park to Piccadilly Circus.

They are calling on Prime Minister Liz Truss and Environment Secretary Ranil Jayawardena to tackle what they call the ‘climate, ecological and cost-of-living crises’.

It comes after two activists from Animal Rebellion targeted Fortnum & Mason and Selfridges and poured milk out in the high-end department stores in central London on Friday. 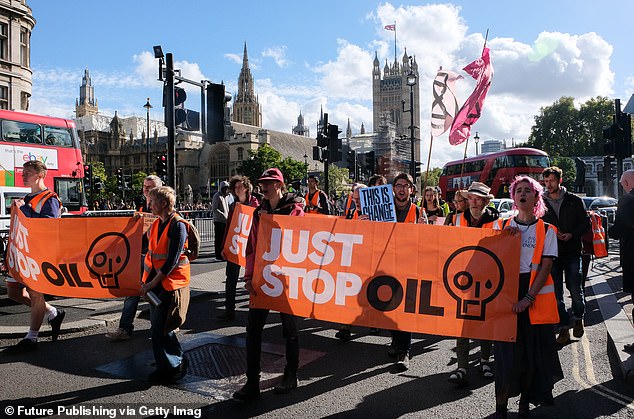 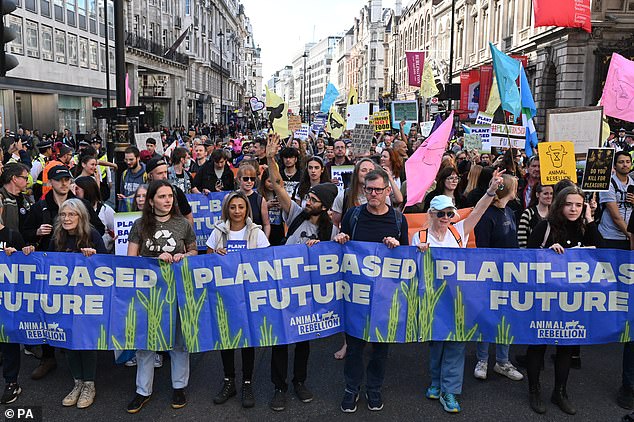 Just Stop Oil activists also joined members of Animal Rebellion (AR) to march down Pall Mall, in the City of Westminster, in a bid to draw attention to the climate crisis

Dillon Parsons, 21, from Preston, a spokesperson for AR and a film production student at the University for the Creative Arts, said he has been involved with the campaign group for two years.

On Friday afternoon, he said: ‘We are currently at Trafalgar Square. There are I’d say a couple of hundred activists and we are all sat on the ground and demanding that the Government transition to a plant-based future because the UK Government has proved that they don’t know how to respond to crises any more.

‘We’ve seen through the cost-of-living crisis and the climate crisis that they are not treating the public well and they have their own pockets as their first priorities.

‘We know that animal farming and fishing is the key cause to the climate crisis, so if we transition away to a plant-based food system we can not only stop 76 billion animals a year from being killed, we can feed the whole population several times over, we can free up 76% of global agricultural land … to give every person and all future generations a chance of having a better future on this planet.’

He said he was not present when the shops were vandalised, but added: ‘If the Government responded to us and gave us a chance of a plant-based future we wouldn’t have to do actions like this but causing this level of disruption, if this is what is going to get us heard, that’s the actions we’ve got to take.’ 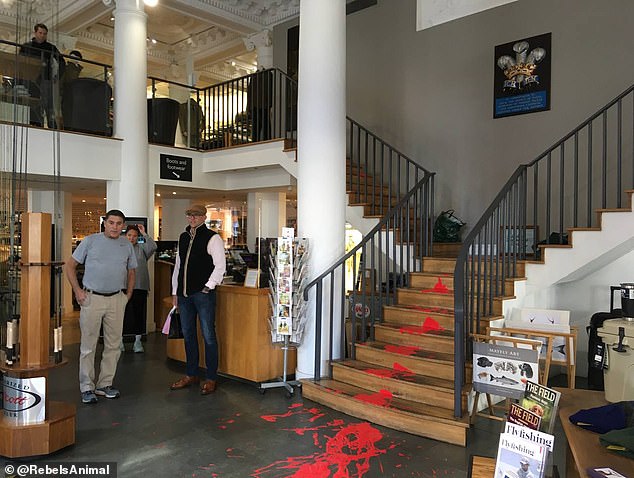 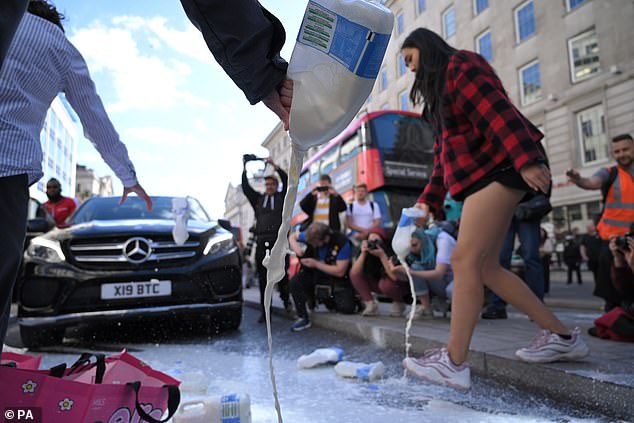 Others poured milk on to the streets as they called on Prime Minister Liz Truss and Environment Secretary Ranil Jayawardena to tackle what they call the ‘climate, ecological and cost-of-living crises’

AR is also calling for governmental support for farmers and fishing communities to transition to a plant-based food system and a programme of rewilding.

The Met Police confirmed that 27 people were arrested today in connection with the AR protests.

A statement said: ‘Nine people were arrested on suspicion of causing criminal damage after three retail premises in central London were damaged with paint.

‘A 40-year-old man and a 26-year-old woman were also arrested in Green Park on suspicion of criminal damage and theft. These arrests relate to an incident at a business premises on Piccadilly, W1A on Friday, 7 October.

‘At 10.20hrs on Saturday three people, a 26-year-old man and two women, aged 28 and 22, were arrested on suspicion of possession of articles to cause criminal damage. Their arrests follow a proactive vehicle stop in Berwick Street, W1 during which fire extinguishers full of paint were found.

’13 people were arrested shortly after 18:00hrs after they blocked Westminster Bridge. Efforts were made to engage with the group and a number of people left voluntarily. Those who did not were arrested.’