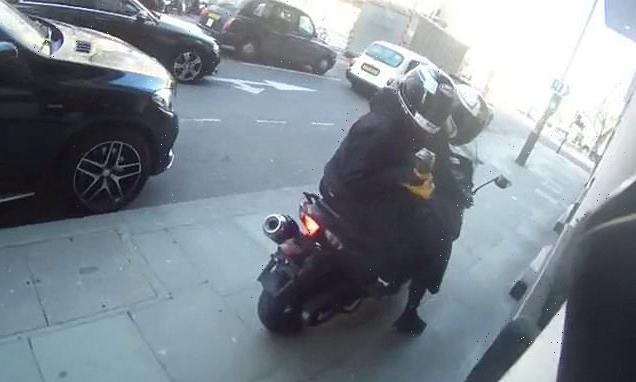 This the terrifying moment a motorcyclist stood up to moped thugs armed with an angle grinder who targeted him and his bike.

Nick Donnelly, 34, was riding through central London after a hospital appointment when the scooter-riding pair approach him at a red light and he felt something ‘in his back’.

Mr Donnelly, a start-up founder turned on his camera and then sped off in order to escape the moped rider and their passenger.

Helmet camera footage shows Mr Donnelly pulling into the entrance of The Churchill hotel, near Marble Arch, and bravely standing up to the pair of thugs, with one holding an angle grinder. 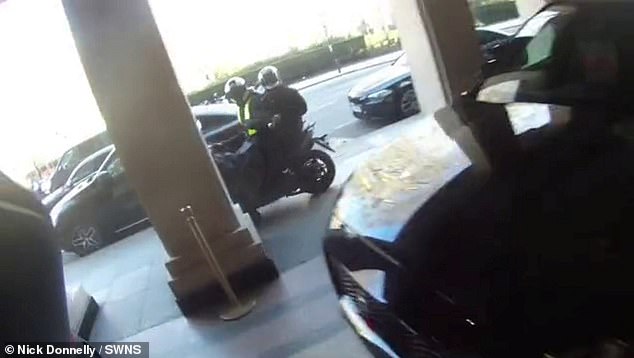 Nick Donnelly, 31, was ambushed by a pair of thugs on a moped as he was riding his motorcycle through central London 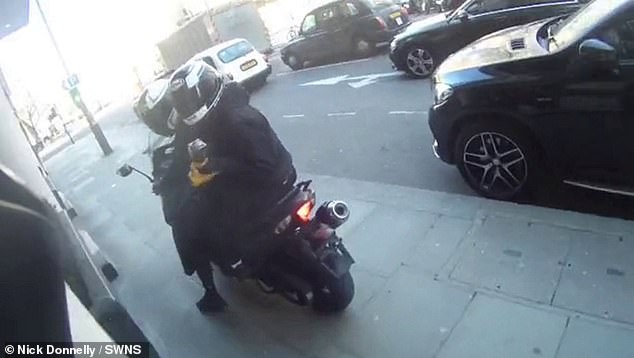 He sped off and tried to hide in the Churchill Hotel when the suspects followed him. One of the men brandished an angle grinder before they sped off on the moped which had its rear number plate removed to prevent its identification

Mr Donnelly said: ‘I was riding my motorcycle to the Fortius Clinic for an MRI. While riding I noticed two guys behind me on a moped.

‘As I was parking, one guy jumped off the moped and ran at me. I immediately accelerated to avoid any confrontation.

‘Before I knew it, these two guys were chasing me. As they chased me, they tried to nudge me a few times when they got up alongside me.

‘They nearly drove into the back of my bike at one point.

‘With my more powerful motorbike, I managed to get some distance between them and I. It was at this point I flicked my head camera back on.

‘I attempted to hide in a hotel driveway, which you see me pulling into in the video. They obviously saw me pull in and drove up on the pavement.

‘At this point, I felt the only option I had was to confront them.’

But Mr Donnelly thought he was either going to crash trying to escape the pair and his only option was to find a safe place to hide. 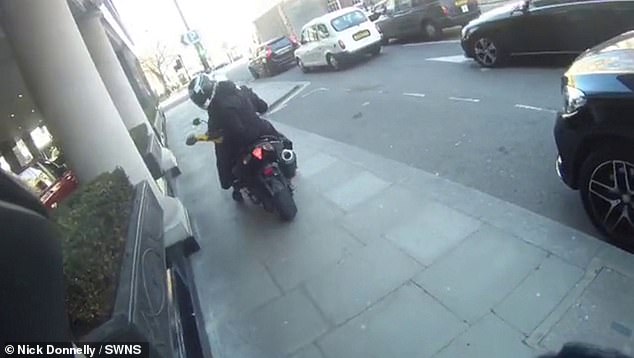 Mr Donnelly thought he was better confronting the pair rather than waiting for them to attack. He said they rode off after he stood up for himself 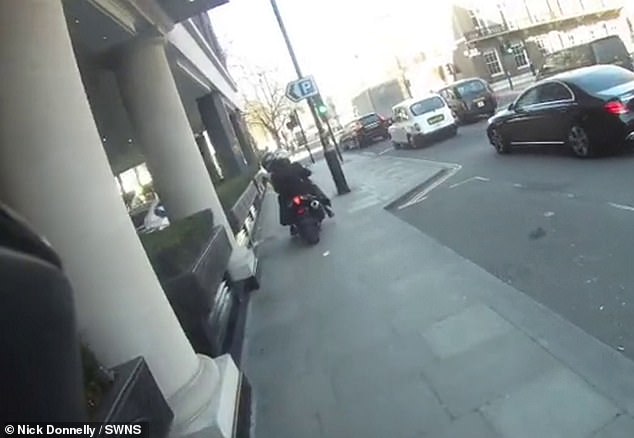 The two suspects fled along the pavement near Marble Arch

He said: ‘I had mixed feelings throughout with nervousness to begin with as I saw these two behind me.

‘Once they had left the scene, I was shaking, scared and exhausted.’

Despite the terrifying confrontation with the angle grinder-wielding thugs, Mr Donnelly hasn’t changed his driving habits and still rides into London.

He added: ‘These minor events still leave their mark. However, it doesn’t stop me riding or going into London.’