A five-year-old girl was saved from by two men who broke her fall after she fell from the fifth floor window of an apartment.

Aysha, five, climbed onto a windowsill while her mother had left her alone after deciding to go to the shop.

Two quick-thinking passersby noticed her hanging and managed to position themselves under the apartment in Makhachkala, Russia. 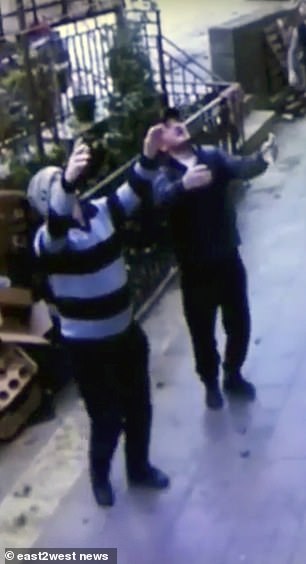 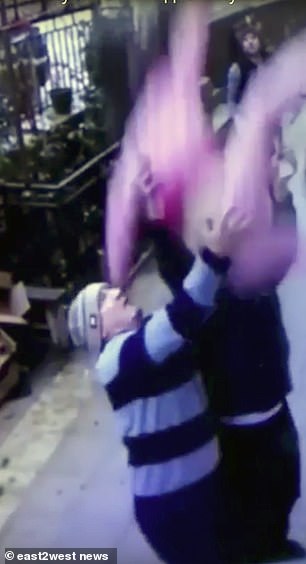 They shout to the little girl before she falls and they break her fall as she falls to the ground.

They do not manage to catch her cleanly and she hits the grounf with some force after falling through their outstretched arms.

The young girl suffered no fractures but did have some bruises.

A woman wearing a hijab also saw the girl hanging from the ledge but went into a doorway before the fall, perhaps to call the emergency services.

The girl’s unnamed mother rushed to the scene and took the child seconds after the men saved her.

She is believed to be seen running towards the scene at the end of the CCTV footage.

A video shows the two men shouted up to the little girl before she fell. They held their arms out but failed to catch her cleanly (pictured)

One of the hero men was named as minibus driver Tagir Magomedov.

The other was named only as Aydemir.

One of the saviours scooped up and hugged the girl after her traumatising fall.

One of the men twisted his wrist and tore a tendon in trying to catch the falling girl.

The child weighed 17 kilograms according to reports.

The men were on their way back to work after lunch when they saved the girl.