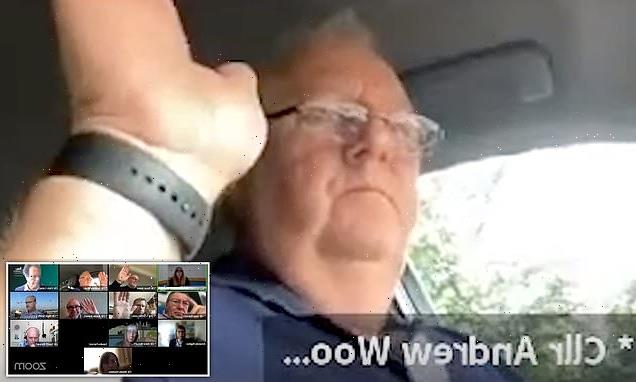 A ‘completely reckless’ Welsh councillor has been accused of voting in a virtual Zoom council meeting while driving his car.

Councillor Andrew Wood was spotted on camera dialling into the meeting from his car while sitting behind the wheel. He denies the allegation.

He appeared to take his hand off the wheel multiple times to vote, including while the vehicle was moving, before then switching off the feed.

Cllr Wood, who is an independent for Gele and Llanddulas on Conwy council in North Wales has been slammed as ‘reckless’ by opposition councillors following the emergence of the footage. 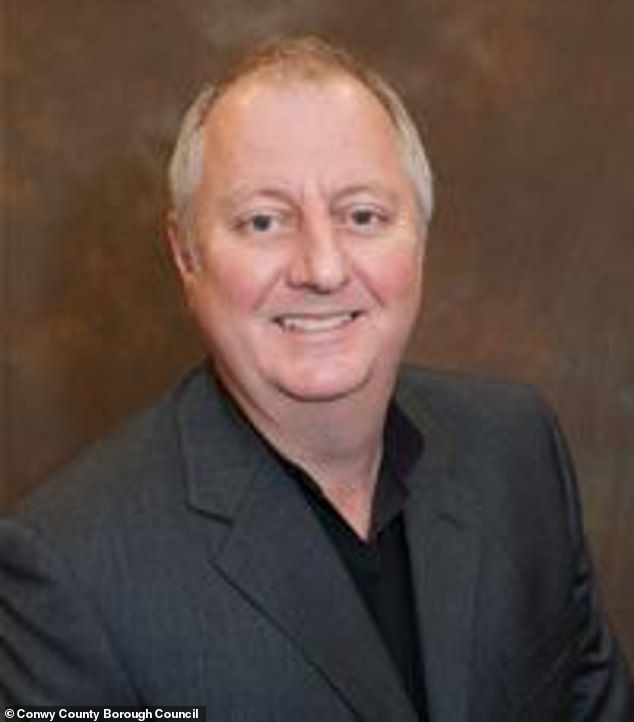 Cllr Wood, of Abergele, is seen in the video using a device which appears to be attached to a bracket mounted on the vehicle.

The car appears stationary at the start of the video and Cllr Wood is seen raising his right hand to vote on a motion in the meeting.

He then switches to his left hand, the side which the device is on.

The car then begins moving and the councillor can be seen looking towards the screen multiple times as he drives the vehicle.

He then raises his hand to vote a second time, before reaching over to adjust the device. 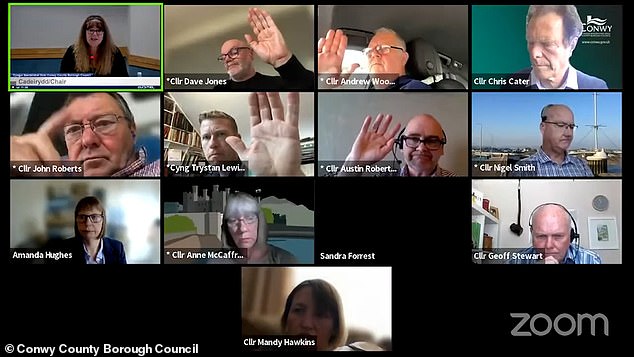 Cllr Wood (third from left, top row) appeared to be driving his car when he lifted his hand to vote 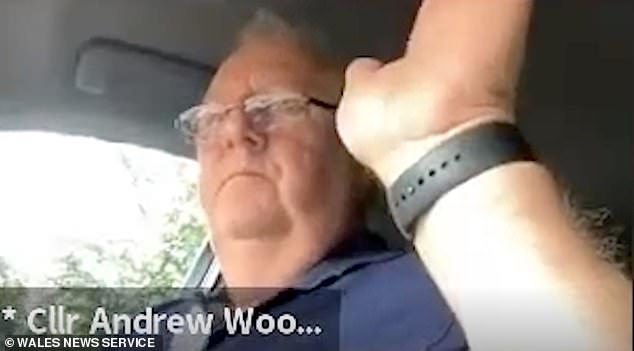 Video from the council meeting, available on Conwy Council’s Youtube page, appears to show Mr Wood with his hands off the wheel while driving 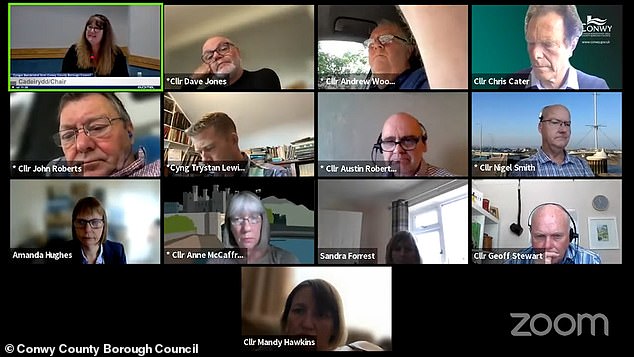 With the vehicle still moving, he raises his hand a third time before looking again at the device and appearing to struggle with it for several seconds before the feed disappeared.

The Zoom call was a meeting of the council’s Finance and Resources Overview and Scrutiny Committee in July.

Opposition councillors have blasted his alleged actions as ‘completely reckless’ – and claimed it could ‘quite easily have turned into a complete tragedy’.

People have reacted with anger online and the councillor is now facing calls for him to quit in the wake of the footage.

An online petition has been set up to place pressure on the councillor to resign.

Cllr Wood said: ‘I can tell you I have not done a Zoom meeting while driving a vehicle. The only time I have ever attended a meeting whilst in my vehicle would have been an audio meeting only.

‘I play it through my Bluetooth, other than that I do not have a clue as it’s never been pointed out to me. I know nothing about it.’

The meeting lasted for more than two hours and was live-streamed before being uploaded to the council’s YouTube channel.

A spokesperson for Conwy County Borough Council said: ‘We were not made aware of this matter until we received an enquiry yesterday.

‘The Monitoring Officer will consider appropriate action and also remind all elected members of their individual responsibility to conduct themselves in line with the requirements of the Code of Conduct and Members Protocol.’