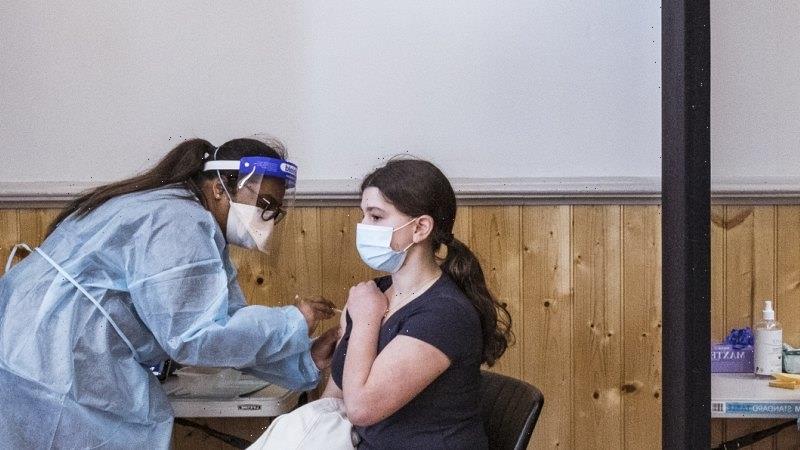 Coronavirus has killed more than 900 Australians aged 60 and above, but doctors say too many in this extremely vulnerable group are still shunning vaccination, fearing a rare side effect linked to just one local death in their age group. 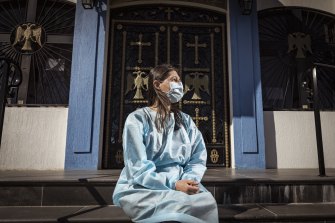 Dr Magdalena Simonis, who was working at a pop-up vaccination clinic at a Greek church in Thornbury on Saturday, says some of her patients are not getting their information about vaccines from the right sources. Credit:Chris Hopkins

They say that while “dramatic” media reports about a rare blood clotting condition caused by the AstraZeneca vaccine has stuck with many people, the immediate and significant danger posed to them by COVID-19 hasn’t.

GP Magdalena Simonis, who as a Greek speaker attracts many patients from Melbourne’s Greek community, said much of the reputable government information about vaccines was in English only – a language some don’t fully understand.

That left them stumbling across misleading information via Google or on social media.

Dr Simonis said people who were vaccine hesitant told her their main fear was “dying from a clot”.

“But what they are also saying in their circles [is] a few of them are worried about being microchipped,” she said. “And some are also worried about the origin of the vaccines and they’ll say it contains embryonic elements derived from aborted fetuses, which of course is not true in either case.”

About one in 70 people in their 60s who have contracted coronavirus in Australia have died from the virus, and many more have fallen gravely ill. But there still remains a notable section of this age group – at least 20 per cent nationwide – who are yet to get their first dose of AstraZeneca despite being eligible since earlier in the year.

Only just over 40 per cent of those in their early 60s are fully vaccinated, a rate lower than those in their 50s and those in their late 40s (although those groups have had some access to Pfizer, which has a shorter period between doses).

This week, Victorian Chief Health Officer Brett Sutton highlighted the importance of these numbers, saying if there were higher rates of vaccination in people over 60s authorities would have more options to ease restrictions.

For some older Australians, the sticking point remains the vaccine available to them, as they are not yet eligible to get the Pfizer jab, which is finally being rolled out widely to younger people to get more of the population vaccinated faster.

The Royal Australian College of General Practitioners’ Victorian chair Dr Anita Munoz said an unfortunate and incorrect narrative persisted that AstraZeneca was the “bad” vaccine and Pfizer was the “good” one.

“The biggest threat to all of us is the disease we’re trying to prevent, not the vaccines,” she said.

“The risk of COVID and long COVID is infinitely greater than the risk of any vaccine. And AstraZeneca has got really minimal risks in the over 60s, whereas the disease we are preventing is deadly.”

There are signs things could be heading in the right direction, even for the vaccine hesitant.

On Saturday, a pop-up vaccination hub in a hall next to a Greek Orthodox church saw a steady stream of the young and old, receiving their first jabs. 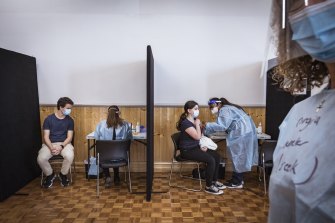 The clinic had been organised by the Greek community in partnership with the Victorian Health Department and the organisers had contacted 200 vulnerable people beforehand they knew “simply weren’t going to be vaccinated” if it wasn’t made easier for them, including people in their 80s.

But for others in line, like teenagers Camille Ibrahim and Kanella Pirpiris, there had only ever been enthusiasm.

Ms Ibrahim, 17, had been driving past on her L-plates with her father when they saw the pop-up centre. Five-minutes later she was vaccinated. Then they called her brother and two friends who were nearby to get vaccinated too.

The year 12 student said she’d seen plenty of misinformation being spread about the vaccines and initially the family had to push her grandparents to get a jab.

“They are on YouTube and their phones and see things like ‘AstraZeneca kills people’ and ‘Pfizer … there’s trackers in the vaccine’. There is a lot of false information and older people are more vulnerable to these messages.”

However, she said once they had got the vaccine, they were proudly sharing the news and pictures to their group chats.

Bill Papastergiadis, the president of the Greek Community in Melbourne, said vaccines were crucial to the community as it would help them reconnect to the thing that is so central to their lives – family at home and overseas.

“Some of the elderly, they’re at an age where this is their last chance to travel,” he said.

“My mother’s in that age bracket. She probably doesn’t have five years left. So if she doesn’t see her loved ones in the next year or two, it’s a goodbye by telephone, and I think it would be a tragedy for these people.”