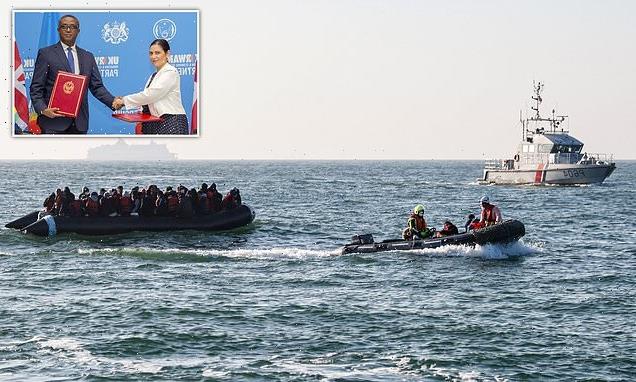 Asylum seekers in Britain are going into hiding as they fear being sent to Rwanda under the Government’s new scheme to tackle illegal migration, charities have claimed.

The British Red Cross and the Refugee Council urged Home Secretary Priti Patel to rethink her plans to send migrants 4,000 miles away.

They outlined the ‘detrimental impact on the physical and psychological health’ on asylum seekers following the announcement of the new proposals.

This included reports of young people self-harming, people disappearing from Home Office-supplied accomodation, and others now refusing to access support.

Under her new £120million scheme, Ms Patel has warned that any adult who enters the UK illegally could be sent on a one-way ticket to the African country to have any asylum claim processed.

She has defended the plans as a means of clamping down on migrants making the perilous journey across the Channel in small boats.

The Home Secretary revealed last night that, under the new scheme, the first migrants have already been told they face being sent to Rwanda to claim asylum.

She confirmed the first batch of illegal migrants had been handed official confirmation that they would be a test case for the controversial programme.

Officials refused to say how many people were in the group but they are thought to have arrived by dinghy from northern France. 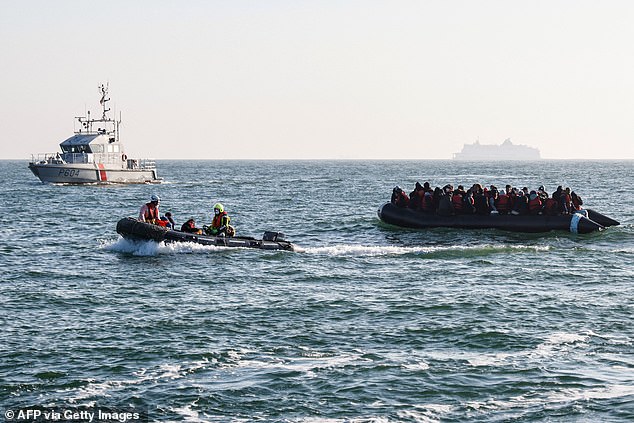 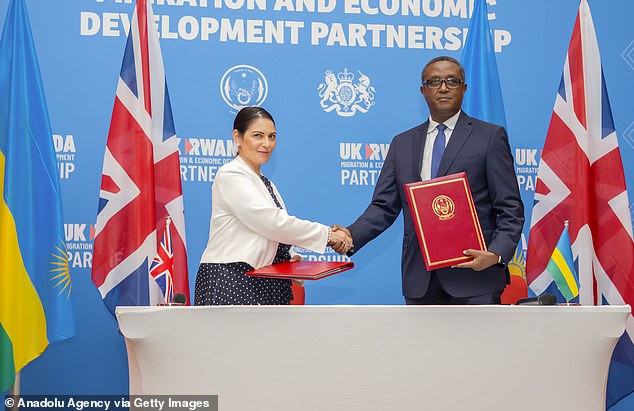 Under her new £120million scheme, Home Secretary Priti Patel has warned that any adult who enters the UK illegally could be sent on a one-way ticket to Rwanda

Together, the British Red Cross and Refugee Council worked with nearly 44,000 people as they sought asylum in the UK last year.

They have now detailed how the announcement of the Rwanda plan last month has affected those within the asylum system in Britain.

Those being supported by Red Cross include a Rwandan asylum seeker in South East England who fears being sent back to the country.

He told the charity he would be in hiding and refraining from accessing support so he is not identified by authorities.

An Afghan living in temporary accommondation supplied by the Home Office in the East Midlands also told the Red Cross he had gone into hiding fearing that he would be detained and sent to Rwanda.

He also claimed many of his friends were in the same situation and planned to go underground so they are not detained.

An asylum seeker from Ethiopia based in the West Midlands also revealed how he had left his accommodation out of fear he will be sent to Rwanda.

Mike Adamson, chief executive at the British Red Cross said: ‘We are hearing directly from many people seeking asylum of the distress and anxiety recent announcements have provoked, even though they may not be directly impacted by them.

‘As a result of the measures in the Nationality and Border’s Act, alongside the recent announcement to remove people to Rwanda on a one-way ticket, people are telling us that they feel less safe and less welcome in the UK.

‘It’s therefore unsurprising that people’s psychological safety and sense that they are welcome has been eroded, and that people considering going underground leaving themselves without formal support and in very vulnerable positions.

‘It’s vitally important that people who have been displaced from their homes feel safe and able to come forward and apply for the protection they need.

‘We already support thousands of people who face destitution each year, and these policies are only likely to increase the need for help.

‘We are urging authorities to change tack and instead address fundamental issues within the asylum system by creating more safe routes, improving asylum decisions and making sure people live in dignity with the support they need.’

Enver Solomon, CEO at the Refugee Council, said: ‘We are hearing tragic stories about the severe impact on mental health, including young, vulnerable children who are terrified what will happen to them with reports of self-harm.

‘We are concerned the government is not seeing the face behind the case and should be doing far more to exercise its duty of care towards vulnerable people.

‘These are men, women and children who have already endured so much trauma and upheaval.

‘These new measures fail to address the reasons people take perilous journeys to the UK, and so will do little to deter people coming but only create more human suffering, distress, and chaos with dangerous, far-reaching consequences for vulnerable people who are simply in need of safety.

‘We urge the Government to immediately rethink its plans and focus on operating an orderly, humane and fair asylum system.’ 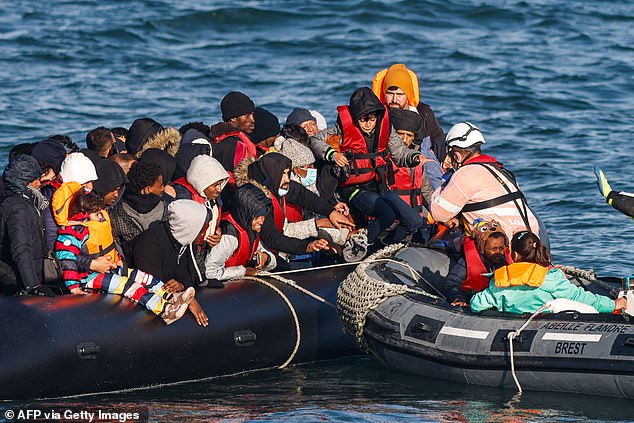 Home Office guidance has shown migrants who arrive in Britain from Monday will be a ‘priority’ for the Rwanda scheme.

Boris Johnson pledged ‘tens of thousands’ of migrants would be sent to Rwanda, but it has since emerged that numbers could be far lower amid an avalanche of legal challenges.

Migrants selected for the scheme receive a ‘notice of intent’ letter informing them they are ‘under consideration for relocation’.

A Home Office spokesperson said: ‘The UK has a proud history of supporting refugees in need of protection.

‘We have welcomed hundreds of thousands of people to the UK through legal asylum routes, as well as stepping up recently in times of crisis to welcome refugees en masse in a short space of time from Afghanistan and Ukraine.

‘Asylum seekers have access to health and social care services from the point of arrival in the UK. We take every step to prevent self-harm or suicide, including a dedicated team responsible for identifying vulnerable asylum seekers and providing tailored support.

‘However Britain’s asylum system is broken, as criminals exploit vulnerable people through illegal smuggling routes at a huge cost to the taxpayer.

‘Under our world leading migration partnership with Rwanda, a fundamentally safe and secure country, illegal migrants will be relocated to Rwanda to have their claims for asylum considered- helping to break the people trafficking business and save lives.’