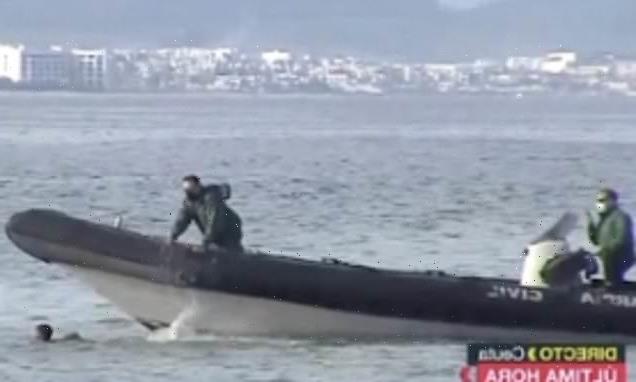 Dramatic footage has captured a young migrant boy trying to swim back to Morocco from a Spanish enclave while using his rucksack as a float – and refusing rescue efforts.

The child can be seen struggling to make gains in the choppy waters off Ceuta while Spanish Civil Guard officers try to coax him out of the water from a lifeboat.

But the little boy can be seen repeatedly ignoring the policeman – from the aquatic GEAS force – who is sticking his hand out in an attempt to pull him to safety.

Up to 8,000 people entered the Spanish enclave of Ceuta from Morocco last week after the North African country left its borders wide open.

Morocco has since closed them but according to Spanish media up several thousand minors remain stranded in the Spanish territory in legal limbo – with dozens recently attempting to swim back.

The exact number is unknown but the government of Ceuta said on Friday they had received 4,400 calls from Moroccan families looking for their children after having made the crossing that week.

‘Police are trying to rescue the boy but it appears he will not let them,’ a newsreader on Spanish TV channel La Sexta explained as they broadcast the latest footage.

Another newscaster added: ‘He appears to be using his white rucksack as a float… they are trying to save him but he has only one objective and that is to arrive to the coast and to step foot only in Morocco.’

The boy repeatedly refuses to board the vessel, kicking his feet furiously to propel himself closer to home.

The officers could only monitor him to make sure he did not drown.

According to police, he had jumped into the water with another boy, who is thought to have made it to the other side of the border.

Reports suggest dozens of minors have attempted to make the often dangerous journey back to Morocco over the past few days. 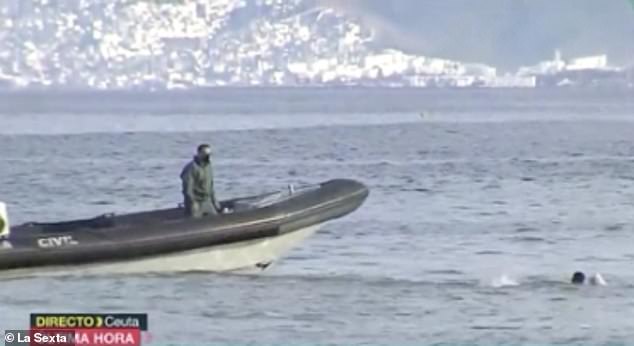 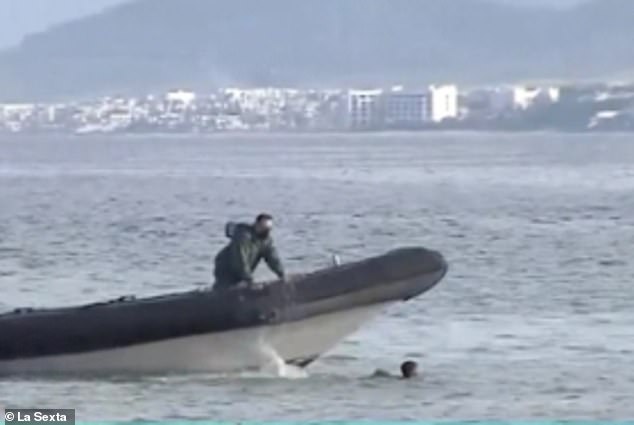 A policeman is just metres away from the boy and puts his hand out in a bid to pull him for the water, but the child ignores him and propels himself towards Moroccan shores

It comes after they were swimming across in droves just last week, including one boy who was filmed arriving by using plastic bottles as a float.

He was pictured attempting to scale a wall barefoot before being detained by Spanish soldiers.

But many are now seeking to return home after their hopes of a much better life in the Spanish enclave were dashed by the harsh reality of life on the streets or a prolonged stint at an internment camp, or CEPI (Centre for the Participation and Integration of Immigrants).

The return crossing can be relatively simple at low tide, when they can just cross some rocks from the Spanish beach of El Tarajal.

But in the high tide, those like the boy with the rucksack are often forced to swim around the rocks.

All minors have arrived without incident so far.

Meanwhile, the children who choose to remain in Ceuta are hiding from Spanish patrols among the rocks, or camping in the mountains in shelters made of sheets and blankets, reports La Sexta. They have to scavenge for food and clean themselves in the sea, with one group seen fighting over a bottle of shampoo.

Estimates suggest there could be around 4,000 Moroccan children in the Spanish territory – with many still seen roaming the streets, hoping to avoid being transferred to an official shelter in fear of being placed in the CEPI or sent back home.

However the lack of documentation makes it almost impossible to repatriate them, although some families have been appealing for their children to be sent back, sharing their pictures and contact information on social media.

Other children who manage to speak to their parents on the phone are told to stay in Ceuta, Spanish media reports.

The enormous influx of people, described by some politicians as an ‘invasion’, came amid strained relations between Madrid and Rabat over the former’s decision to provide medical treatment for Brahim Ghali, the leader of the Polisario Front, who has Covid-19.

The armed group has fought for the independence of Western Sahara, a former Spanish colony mainly under Moroccan control, for decades.

Spain believes Morocco deliberately opened its borders and turned a blind eye as a form of ‘revenge’ in the ongoing feud.

Youth unemployment is a chronic issue in Morocco, where 80 percent of unemployed people are aged between 15 and 34, according to US government figures. 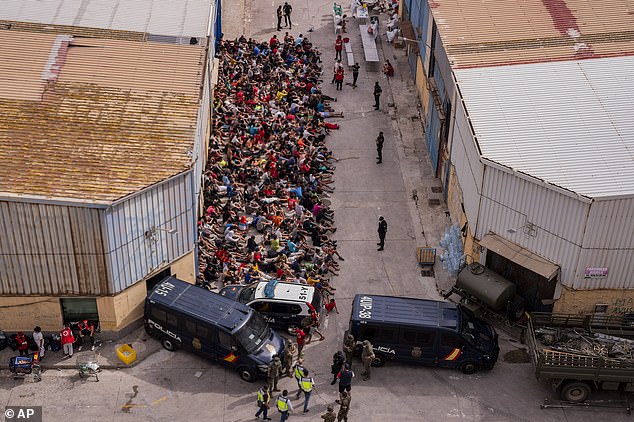 At least 8,000 migrants crossed into Ceuta from Morocco, prompting scenes of panic and distress as authorities struggled to manage the unprecedented influx. Pictured: Arrivals gathered outside a warehouse as they wait to be tested for coronavirus 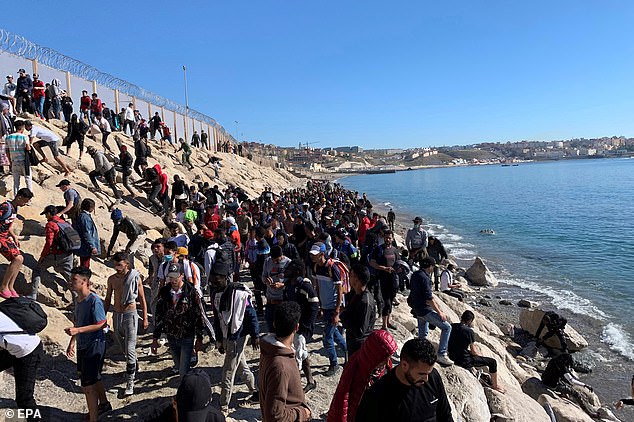 Hundreds of people gathered on the Moroccan side of the border last Wednesday as they tried to cross into Spain, but found themselves blocked after border guards stepped in

Ceuta, along with Spain’s other North African enclave Melilla, have the European Union’s only land border with Africa and have long been a magnet for migrants seeking a better life in Europe via Spain.

Spanish Defence Minister Margarita Robles said last week that Morocco’s inaction over the migrants was ‘an aggression of Spanish borders and of the borders of the European Union’.

‘We are not talking about youths aged 16, 17, children as young as seven or eight were allowed through according to NGOs… ignoring international law,’ she said in an interview with Spanish public radio.

‘Call it what you want but I call it blackmail,’ she said, adding ‘it is not acceptable to put the lives of minors or of people of one’s own country, at risk.’

Spain’s government said that around 5,600 of the 8,000 migrants had already been sent back to Morocco as of last week, and that anyone who reached Ceuta’s beach would be immediately returned.

Spanish authorities had been caught by surprise when thousands of mostly young people began swimming or using inflatable rubber rings and dinghies to cross the border, with Moroccan forces appearing to look the other way.

Madrid moved quickly to return most of the migrants and calm has largely returned to the beach of El Tarajal in Ceuta, where hundreds of soldiers in armoured vehicles have been deployed.