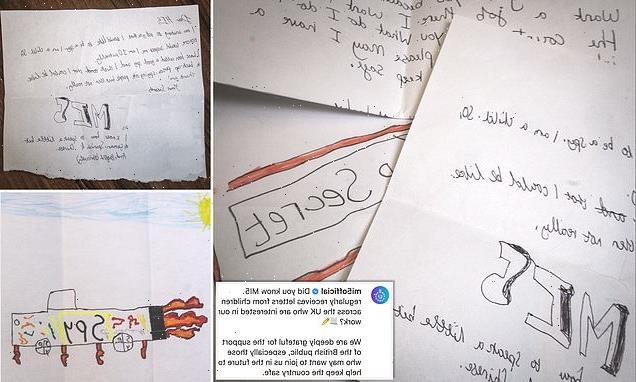 ‘Can I be a spy? I might only be 10 but I can fit in small spaces and run fast’: MI5 reveals application letters it has received from children who want to be mini James Bonds

MI5 have released a series of comical job application letters they have received from children across the UK determined to become the agency’s next top spies.

The letters, which were shared on the organisation’s Instagram page, offer a glimpse of the country’s aspiring spies hoping to become a part of the secret service.

Among the comical letters, was one from a ten-year-old child who tried to convince the agency’s recruitment team they were a ‘master of disguise’ and another from an eight-year-old who proudly claimed: ‘I keep very good secrets’.

In a post on Instagram, the agency wrote: ‘Did you know MI5 regularly receives letters from children across the UK who are interested in our work? 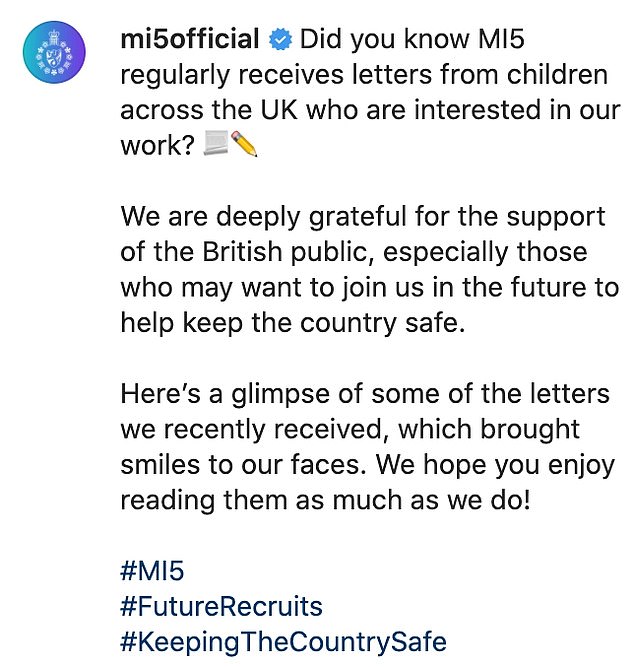 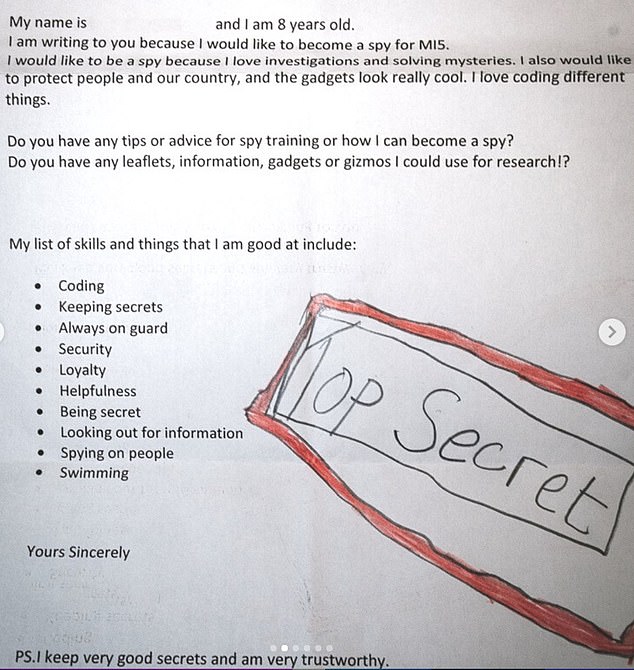 ‘We are deeply grateful for the support of the British public, especially those who may want to join us in the future to help keep the country safe.

‘Here’s a glimpse of some of the letters we recently received, which brought smiles to our faces. We hope you enjoy reading them as much as we do!’

In once comical letter, one ten-year-old child was seen asking the agency: ‘Do you currently have a job for a ten-year-old? I may be small and young but I can fit into tiny places and run fast.

‘I am a master of disguise as me and my sister have turned a simple blanket into many costumes.

‘We also used to play spies out in out garden when we were younger and used stones as gadgets.

‘I have experience in using walkie talkies to secretly report back on what my dog is doing in the house to my sister. I would be extremely proud to work at MI5. I look forward to hearing from you.’

Meanwhile another aspiring spy told the agency that as they were a child ‘no-one would suspect them’.

In their application they wrote: ‘Dear MI5, I am writing to tell you that I would like to be a spy. I am a child so no-one would suspect me. I am 10 actually.

‘I have been called a good spy and I think that I could be like a back-up person, spying on people but then not really.’

Elsewhere another hopeful candidate wrote:  ‘I would like to be a spy because I love investigation and solving mysteries. I would like to protect people and our country and the gadgets look really cool.’ 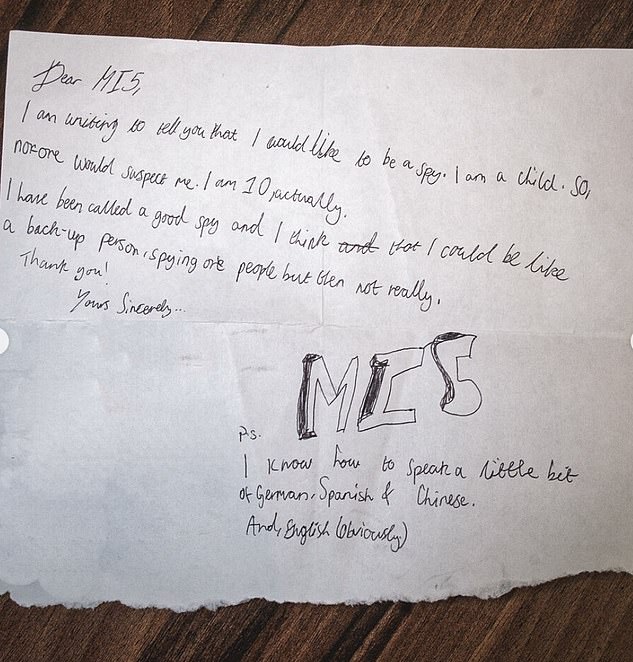 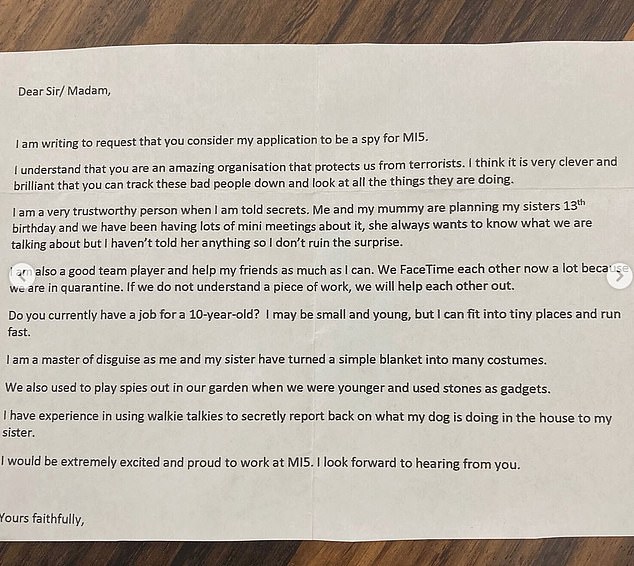 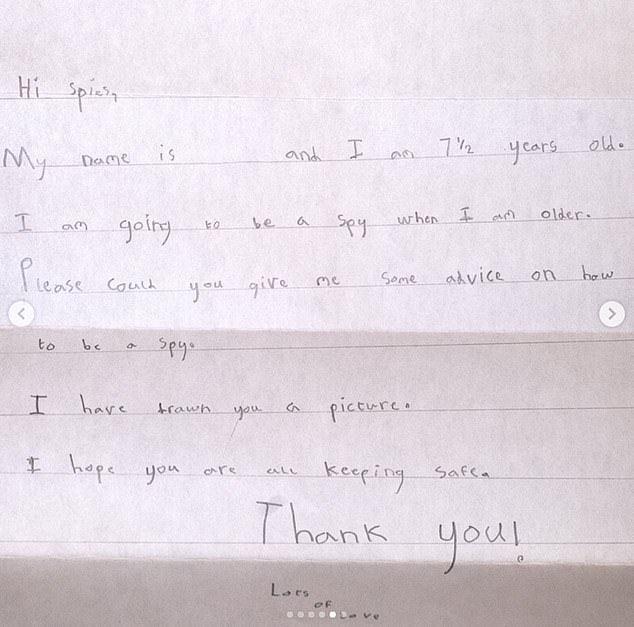 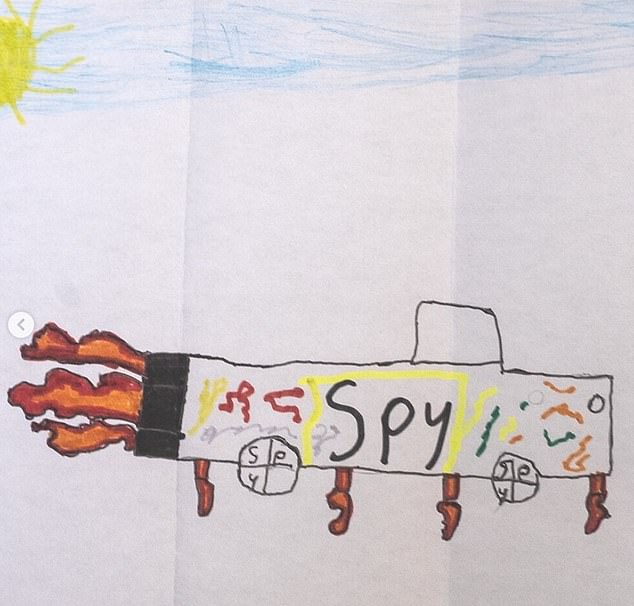 The candidate went on to say: ‘I am keep very good secrets and am very trustworthy.’

Following the comical applications, social media users flocked to the agency’s social media page to offer their responses, with one user claiming it was the ‘best post they had seen all day’.

One social media user wrote: ‘Our future looks like it’ll be in safe hands!’

While another added: ‘This is the most wholesome thing I’ve seen in a while’

The heartwarming letters come just a month after MI5 shared a picture from the lobby of its London headquarters in its first post on Instagram.

In April, the secret service uploaded a shot of the inside of Thames House on Millbank.

A caption alongside the picture read: ‘The secret to successful spying? Consider all angles. It’ll give you a better view…

‘This is the view our staff see as they enter MI5 HQ in Thames House, London. Behind these pods lie some of the UK’s best kept secrets.

‘Follow us as we open our doors to Instagram, granting you exclusive views of life inside MI5.’