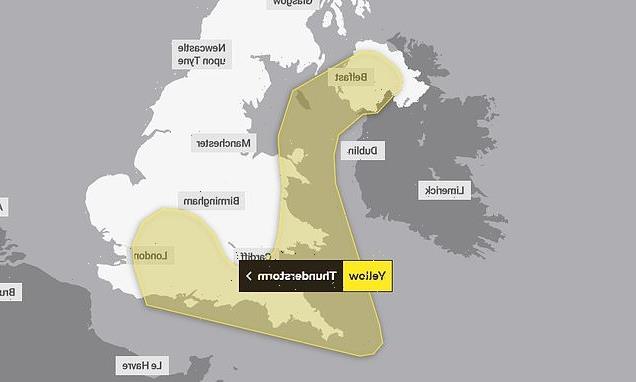 So long summer! Met Office issues thunderstorm alert for large parts of England, Wales and Northern Ireland TONIGHT, with forecasters warning of floods and ‘damage to buildings’ from lightning strikes and gusty winds

The Met Office has issued a thunderstorm alert for large parts of England, Wales and Northern Ireland tonight amid warnings of floods and damage to buildings.

The weather service gave out a yellow warning between Sunday 8pm until Monday 4am and told the public to prepare for potential power cuts and localised disruption to services.

Parts of the UK may experience  20mm to 30mm of rainfall in less than an hour while other towns and cities will remain dry.

The yellow alert covers counties such as Cambridgeshire and Essex and includes areas in the south east including Kent and Sussex.

Much of Warwickshire, Gloucestershire and Cornwall are also expected to be affected.

The news comes after months of hot weather and a series of extreme heat waves which swept across the British Isles in July and August. 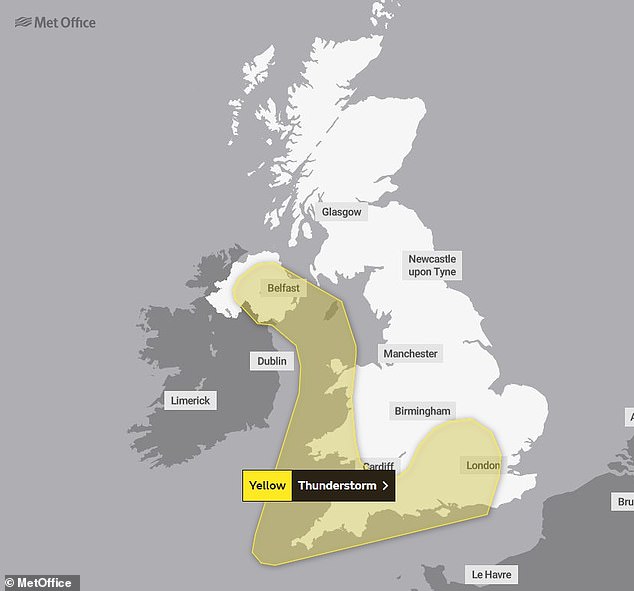 The alert covers London, the South West, parts of Wales and much of Northern Ireland. The news comes after months of hot weather and an extreme heatwave which swept across the British Isles in July and August 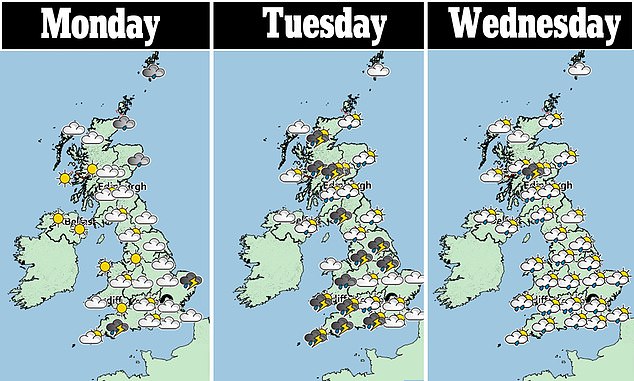 A weather map forecasting the temperature over Monday, Tuesday and Wednesday. The Met Office has issued a yellow warning between Sunday 8pm and Monday 4am

After heavy showers on Monday morning the rain is expected to clear northwards but targeted showers will remain in the south east and west, according to the Met Office.

Longer spells of hail and thunder will hit the south west and north east between Tuesday and Thursday.

Met Office meteorologist Alex Deakin said: ‘Whilst the summer has been dominated by high pressure, we are seeing big changes for this weekend. Low pressure will dominate through the weekend and into next week,

‘Churning around this low pressure we’re going to see slow moving weather fronts that will be the focus for persistent rain, particularly over south-western parts of Scotland and Northern Ireland on Saturday.

‘A few showers over parts of eastern England – they could be quite lively, some thunderstorms are possible, but they will be hit and miss here, so not to be relied upon if you are desperate for some rain.

‘Meanwhile there’ll be showery rain too for west Wales and a few showers over the Midlands. But it won’t rain everywhere all day.’

The highest recorded temperature in the UK today was in Norfolk (26C) while the lowest recorded was in Ravensworth, North Yorkshire (9C).