New York: Emmett Till's family stood on the shore of the Tallahatchie River just outside of Glendora, Mississippi. It was there, that, it is believed, the body of 14-year-old Emmett was pulled from the water after he had been kidnapped, tortured and lynched nearly 65 years ago.

For decades, the spot was unmarked, but in 2008, signs detailing Emmett's harrowing journey were installed around the region, and for the first time there was a memorial to the African-American teenager whose death galvanised the civil rights movement. 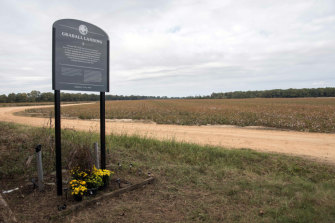 The new historical marker at Graball Landing, just outside of Glendora, Mississippi, where it is believed Emmett Till’s body was found in 1955. The sign, which is the fourth to replace others that were vandalised, is made of steel and weighs 225 kilograms. Credit:Rory Doyle/The New York Times

But the sign at the Tallahatchie River location was stolen and thrown into the river.

A replacement was soon marred with bullet holes. 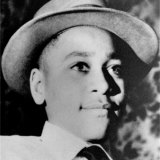 Emmett Till, a 14-year-old boy, whose body was found in the Tallahatchie River in 1955.Credit:AP

Then came a third, which was hit with more bullets.

Now, there's a fourth sign, this one made of steel. It's over an inch thick, and, the manufacturer says, it's bulletproof.

The dedication of the new sign opened old wounds for his cousins, including Ollie Gordon, 71, and her daughter, Airickca Gordon-Taylor, 50. They travelled to Mississippi from Chicago, Emmett's hometown, for the ceremony.

"What they did to Emmett was so ugly that even the Tallahatchie River spewed his body back out so he could be seen and found," Gordon-Taylor said Sunday. She runs the Mamie Till Mobley Memorial Foundation, named after Emmett's mother.

"Vandalism is a hate crime," she said. "Basically my family is still being confronted with a hate crime against Emmett Till and it's almost 65 years later."

Gordon was seven years old when her cousin was killed after Carolyn Bryant Donham, a white woman, said the teenager had grabbed her and wolf-whistled at her. In 2017, she told a historian that her allegations against Emmett were false. 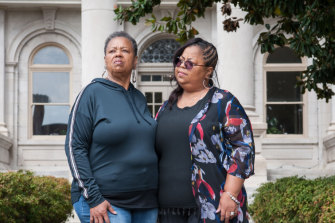 Ollie Gordon (left) with her daughter, Airickca Gordon-Taylor, cousins of Emmett Till, who say their family has never healed from his murder.Credit:Rory Doyle/The New York Times

Ceremonies like the one Saturday provide the family with a sense of gratification, Gordon-Taylor said.