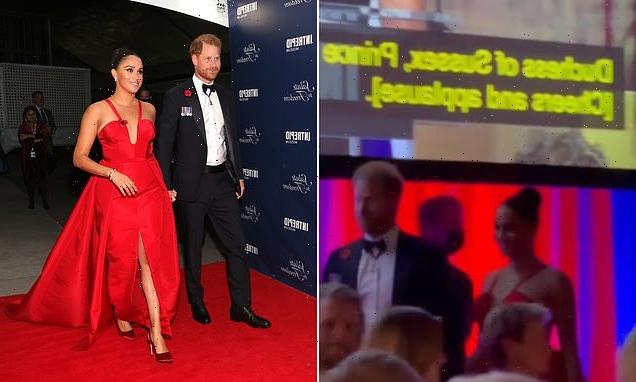 The Duchess… and Duke of Sussex: Meghan ‘pulls rank’ to have her royal title appear BEFORE husband Harry’s at New York Veteran’s Day gala

Meghan Markle has been accused of pulling rank on Prince Harry during their appearance at a Veterans Day gala in New York.

Earlier this month, the Duke and Duchess of Sussex made a rare public appearance at the 2021 Salute to Freedom Gala at the Intrepid Museum in New York.

Both sporting red poppies, Harry also wore his military medals and the cross of the Knight Commander of Royal Victorian Order, while Meghan wore a red gown.

But keen observers noticed that as the couple were welcomed to the stage, where army veteran Prince Harry was due to present Intrepid Valor medals, the television prompt listed the Duchess of Sussex first before his title.

The detail was questioned by viewers who characterised it as odd given that it was a Veterans Day event and Prince Harry was there because of his military background and to award fellow veterans with bravery awards. 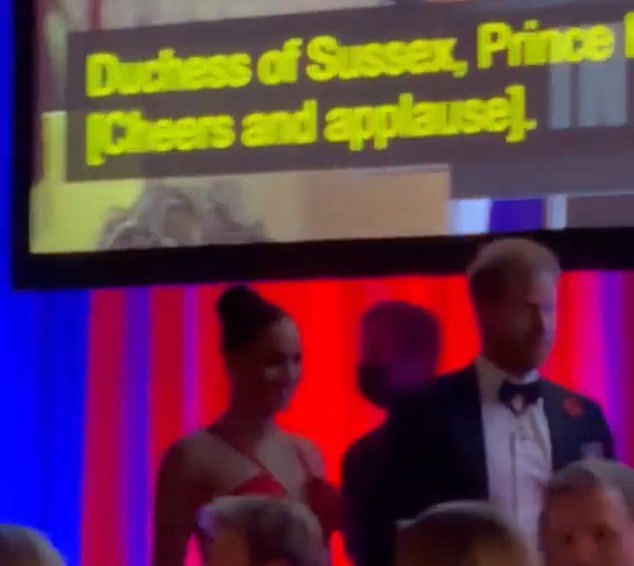 Viewers were left questioning why Meghan’s title, the Duchess of Sussex, was listed before that of her husband former soldier Prince Harry who was there to award bravery medals to fellow veterans at the glamourous Veterans Day event in New York earlier this month

Presenting the awards, Prince Harry spoke of his service, which included two tours of Afghanistan, and how it had shaped the person he is today.

He said: ‘I served 10 years in the military, including two tours of duty in Afghanistan — one as an FAC (Forward Air Controller) on the ground and in the dust with some of you, another as an Apache helicopter pilot in the air supporting and talking with you.

‘Nothing was more valuable than the time I got to spend with my soldiers in a shell scrape, eating an MRE (Meal, Ready-to-Eat) in the back of a tank, thanks for the swaps, flying a mission overhead knowing those below were safer, or making each other laugh when it was needed most.

‘My experience in the military made me who I am today, and I will always be grateful for the people who I got to serve with — wherever in the world we were.’

Dr Glass added: ‘Meghan is in her element. She is in total control as she in essence is the leader of the two leading Harry.’

The Sussexes’ three-day New York excursion included a stay at a luxury apartment on Manhattan’s East Side, two online summits, a red carpet gala on Wednesday honouring veterans at a museum aboard aircraft carrier USS Intrepid moored in Manhattan, and a luncheon at Joint Base McGuire-Dix-Lakehurst in New Jersey on Thursday.

Journalists and photographers at the events were restricted, with information carefully distributed by the couple’s public relations team in the following days.

It comes after Meghan gave a surprise interview to TV host and friend Ellen DeGeneres earlier this week.

Ellen, who is ending her show after 19 seasons amid plunging ratings after being accused of running a toxic workplace last year, is close friends with Meghan having bonded at a LA dog shelter where the talk show host encouraged Meghan to adopt her first dog Bogart. The women have stayed in touch ever since.

In the wide-ranging interview with DeGeneres, Meghan opened up about her domestic life with Harry, Archie and five-month-old daughter Lilibet, whilst also renewing her calls for paid family leave in America.

Harry and Meghan have not yet released any images of their daughter, who was born in Santa Barbara in June and is yet to meet the Queen or any other members of the royal family. 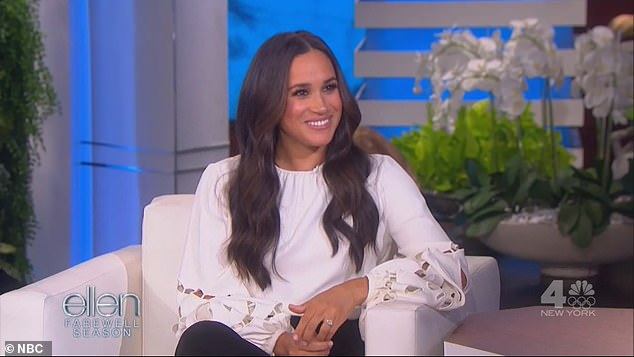 Pictured: Meghan made a surprise appearance on the Ellen DeGeneres show earlier this week

The interview featured family anecdotes including a new snap of two-year-old son Archie and the revelation that Harry and Meghan once went incognito to a post-apocalyptic Halloween party in Toronto.

The interview took a turn for the bizarre when Meghan, 40, left a group of street vendors open-mouthed in shock by dancing and singing in front of them while referring to herself as ‘mommy’ as part of a cringe-worthy on-the-street prank during the show.

Having shared several insights into her ‘happy’ family life in California with Prince Harry and their two children, five-month-old Lilibet and two-year-old Archie, Meghan made a clear attempt to distance herself from the royal family’s reserved image with the toe-curling comedy skit.

The stunt was slammed by her father Thomas Markle who described it as ‘ridiculous’.

Speaking to the Sun, Mr Markle said: ‘She insulted the Queen, the Royal Family and the British people.

‘She made a complete fool of herself and should lose her title. I love my daughter but her performance was ridiculous.’