It’s shortly after midday in Orlando, Florida, and the Republican governor – a Donald Trump disciple who is fast becoming Trump’s biggest presidential rival – is standing on a red and blue stage, soaking up the cheers of his hometown crowd. 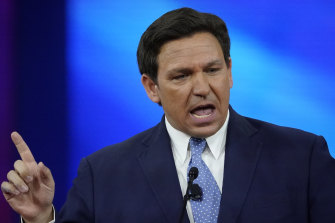 As the clapping subsides, the brash 43-year-old wastes no time reciting a list of the contentious policies that have made him such a popular figure among the party’s rank-and-file.

He set up penalties for big-tech companies that deplatformed politicians, arguing that giants such as Facebook and Twitter were trying to silence conservative voices.

“There are people who look to Florida as the citadel of freedom, who are chafing under authoritarian rule from all across the world,” he tells the die-hard fans who have gathered for the opening day of the annual Conservative Political Action Conference.

“I recently got a letter from Samuel from Australia, and he said, quote: ‘There isn’t much hope right now here, and many of us are fearful of what our leaders have in store for us. I look to you and your great state of Florida for hope during this dark time. Thank you for standing up for us’.”

“Had Florida not led the way,” DeSantis adds, “this country could look like Canada or Australia.” 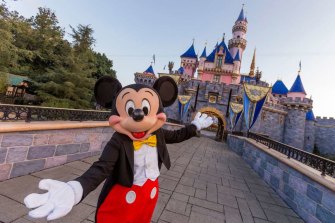 Disneyland is embroiled in a battle with Florida Governor Ron DeSantis over the state’s so-called “Don’t Say Gay” laws.

DeSantis is the Republicans’ five-star general in the culture wars – the latest example being his battle with Disney, Florida’s biggest employer, over new “Don’t Say Gay” laws banning classroom instruction on sexual orientation and gender identity in kindergarten through to the third grade.

On the same day that DeSantis signed the bill into law, March 28, Walt Disney Company CEO Bob Chapek released a statement saying the bill “… should never have passed and should never have been signed into law. Our goal as a company is for this law to be repealed by the legislature or struck down in the courts.”

The governor then attacked Disney, insinuating and sometimes simply insisting that the wholesome House of Mouse was out to pervert the minds of young children.

“This stuff coming out their mouths is unbelievable, that they view their programming as a way to inject a lot of these topics into programming for very young kids,” the governor said in March, before revealing that he was taking a hard look at Disney’s special tax status.

You get the feeling DeSantis is enjoying the fight.

“When you are trying to impose woke ideology on our state, we view that as a significant threat,” he said on Fox and Friends, in one of his many public appearances on the topic.

“This wokeness will destroy this country if we let it run unabated!” 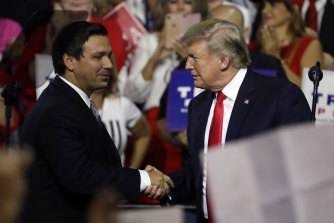 Four years after riding the Trump train to become America’s youngest governor, DeSantis is often touted as the future of the Republican Party.

He’s up for re-election this year, but speculation is building about a possible tilt for the presidency in 2024, which would pave the way for an epic primary race with the man who helped propel him into the national spotlight.

“Ron DeSantis is a brilliant young leader, Yale and Harvard Law, who would make a GREAT Governor of Florida,” Trump tweeted of then state congressman in December 2017, before giving DeSantis his full endorsement the following June.

Fast-forward to now and the relationship between the pair is much more frosty. As DeSantis’ stocks continue to rise, Trump has reportedly become increasingly miffed that his former acolyte has not pledged to stand aside if he announces another shot at the White House.

Adding to the tension is the fact that the governor consistently comes second to Trump in straw polls for the 2024 Republican nomination for president, and often wins them outright if Trump is not included. Indeed, a University of North Florida poll released last month even had him with a narrow three-point lead against Trump among Florida Republicans.

”Governor Grievance is his nickname,” says Michael Binder, an associate professor of the university’s Public Opinion Research Laboratory. “His combative nature plays well with the media, and plays really well voters who are angry about things.”

So who exactly is Ron DeSantis and what does he stand for? To what extent is he trying to out-Trump Donald Trump as the most divisive Republican in his party? And if he competes for the 2024 presidential nomination, could he succeed?

ON the streets of Miami, in the corridors of power of the state capital of Tallahassee, and in the retirement havens of central Florida, there are two schools of thought about the governor.

The first paints DeSantis as a shrewd politician who lacks Trump’s charm but is effective, disciplined and knows how to sniff the political wind. If an issue is simmering – critical race theory in schools; banning transgender athletes from competing in women’s sports – you can bet DeSantis will weigh in at an opportune time.

His key strength, according to friends and foes, is not only picking culture war battles, but amplifying them on cable news channels, raising his national profile.

“He’s the greatest governor Florida has ever had,” says David Duffy, an Orlando native I spotted walking around the Rosen Shingle Creek Resort carrying a white flag with the words “Desantisland” written in Disneyland font.

“He never big-notes his wife, or his baseball achievements or being a veteran. He’s just a dynamic person that got into politics 10 years ago because he didn’t like what Obama was doing, and that’s why we love him.” 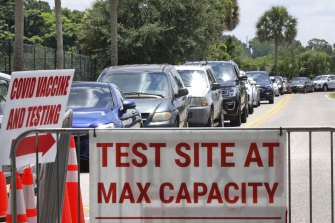 The second version paints DeSantis as a loner and an opportunist driven by naked ambition, even if it means implementing pandemic policies that put peoples’ lives at risk. Others point to his relentlessly confrontational style, which plays well on Fox News but borders on bullying when witnessed up close.

Last month, he came under fire after furiously admonishing a group of high school students for wearing face masks at an indoor news conference, saying it was time to stop what he called “this COVID theatre”. When a mother complained afterwards, his office reportedly made a meme of her and posted it online. 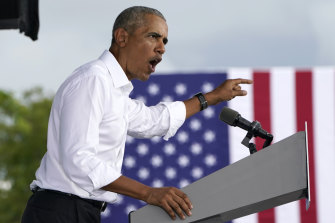 Barack Obama campaigning for Joe Biden in Florida in 2020.Credit:AP

However divisive he may be, one thing is clear: Florida was once a genuine swing state but the political landscape has shifted. In 2008, the year Barack Obama won the presidency, the Democrats had 700,000 more registered voters here than Republicans. Today, there are 82,000 more Republicans registered in Florida than Democrats, thanks in part to the influx of new residents.

Mark Wilson, from the Florida Chamber of Commerce, believes that DeSantis’ response to COVID was a drawcard for people flocking to the Sunshine State during the pandemic. Most of Florida never shut down. Today the state has about 150,000 more jobs than it did before the pandemic.

“I think a decade from now, when the global history books are written about the 180-plus countries that were dealing with COVID, I truly believe that Florida is going to be in the top five places that got it right.”

THE son of nurse and a TV box installer, Ronald Dion DeSantis was always a high achiever.

His childhood baseball team made it to the 1991 Little League Baseball Series. He graduated from Yale and Harvard Law School and later became a Navy Seal lieutenant deployed to Iraq. Then came his rise through Florida’s legal and political system: assistant US attorney; congressman for the state’s House of Representatives; founding member of the conservative bloc known as the Freedom Caucus. 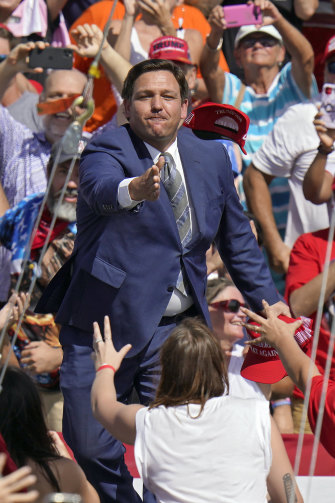 Ron DeSantis throws hats to the crowd before a campaign rally by then president Donald Trump in 2020.Credit:AP

But it was through the Tea Party and later, through America’s 45th president, that DeSantis really began making his mark.

As he campaigned to become governor in 2018 to replace Republican Rick Scott, who is now in federal Congress, he even released an ad that featured him reading Trump’s book The Art of the Deal to his daughter and urging her to “build the wall” as she played with her building blocks. Another scene featured DeSantis teaching his child to read a sign emblazoned with Trump’s trademark motto: “Make America Great Again.”

It was shameless – but humorous and effective. Coupled with Trump’s full endorsement and the backing of billionaire Republican donors, he landed the state’s top political job.

These days, DeSantis’ ambition appears to have surpassed his loyalty to the former president. Simmering tensions spilt over earlier this year, when he refused to reveal his full COVID vaccination history. Soon after, Trump publicly acknowledged he had received a booster and then appeared to take a veiled swipe at DeSantis by describing politicians as “gutless” if they dodged questions about their vaccination status.

Not everyone is convinced he can out-Trump Trump.

“I despise Trump, but the one thing I will say about him is he has a personal charisma,” says Ron Filipkowski, a Republican-turned-Democrat who resigned from a role on Florida’s Judicial Nominating Commission over DeSantis’ handling of COVID.

“There are people around Trump who worship him and choose to be in his orbit. DeSantis has none of that whatsoever.

“A lot of his support is because he’s a Trump disciple. Once he becomes a genuine rival, a huge percentage of that immediately goes away.”