Theresa May is to use top level meetings in Brussels to insist the UK will not be ‘trapped’ in Brexit backstop arrangements, Downing Street said.

The Prime Minister will stress during a round of talks on Thursday that changes to the Withdrawal Agreement will be needed to ensure legally binding guarantees regarding the backstop.

At present the backstop, which is intended to prevent the return of a hard border in Ireland, would see the UK continue to obey EU customs rules after a transition period if no wider trade deal had been reached.

Mrs May insists she has a clear mandate from Parliament to seek fresh, binding guarantees on the issue from Brussels.

The PM will hold talks with European Commission president Jean-Claude Juncker, European Council president Donald Tusk and other senior EU figures during her trip to Brussels.

Downing Street said that Mrs May is ‘open to different ways’ of achieving her objectives on the backstop.

The PM will use the meetings to state that Parliament has sent ‘an unequivocal message that change is required’.

However, it was revealed late last night the deal vote could be delayed. 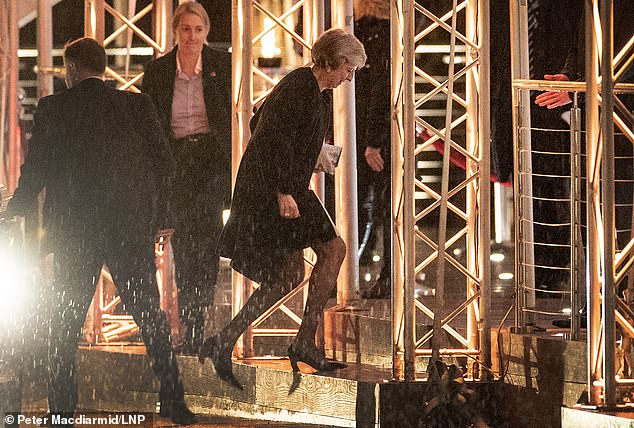 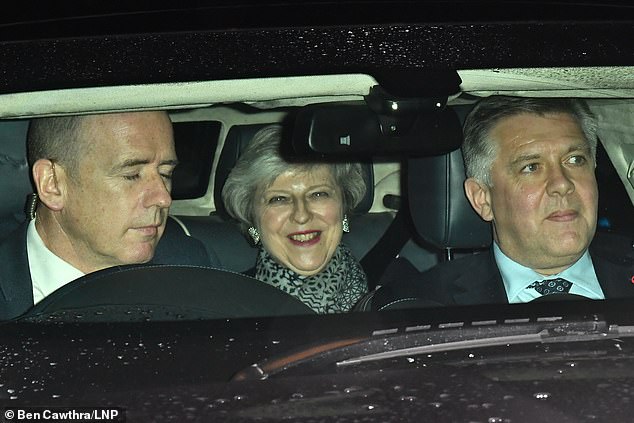 The British Prime Minister is seen smiling as she leaves Battersea Park in London following the annual Black and White Ball, a fundraiser held by the Conservative Party

Instead of going ahead as scheduled next week, Julian Smith indicated in the cabinet on Tuesday that the vote will not be held next week as May is not expected to have renegotiated her deal in time, the Telegraph revealed.

One of the PM’s key messages for EU leaders will be that the Commons has now made it clear it could support the Withdrawal Agreement as long as concerns about the backstop are addressed.

Mrs May also intends to stress that Labour leader Jeremy Corbyn also has concerns about the backstop, so it is not just an issue for the Tories and their DUP allies.

Meanwhile, Jeremy Corbyn has set to cause further problems for May after he wrote to the Prime Minister setting out five Labour Brexit demands which he says can bring the country together.

Ahead of Theresa May’s talks with EU leaders on Thursday, Mr Corbyn has insisted that the PM needs to get Labour’s priorities enshrined in the Political Declaration setting out future relations with the EU.

Mr Corbyn said that securing the demands in law is the only way of achieving Labour support and uniting the country.

The Labour leader has told the PM that just seeking modifications to the Northern Irish backstop proposals is not enough to win widespread backing and that she must change tack on key red lines.

In the letter to the PM, which follows their Brexit meeting last week, Mr Corbyn calls for a ‘permanent and comprehensive UK-wide customs union’. 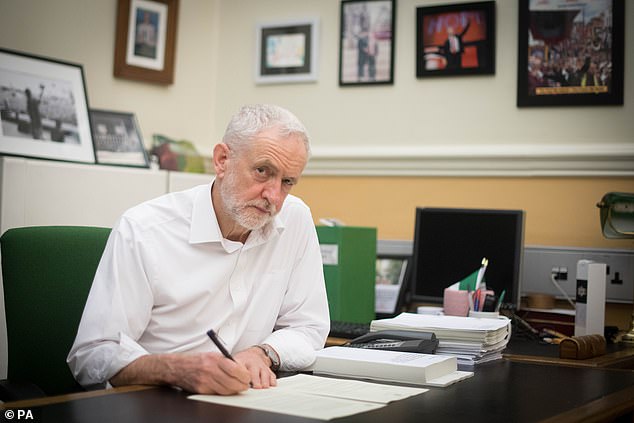 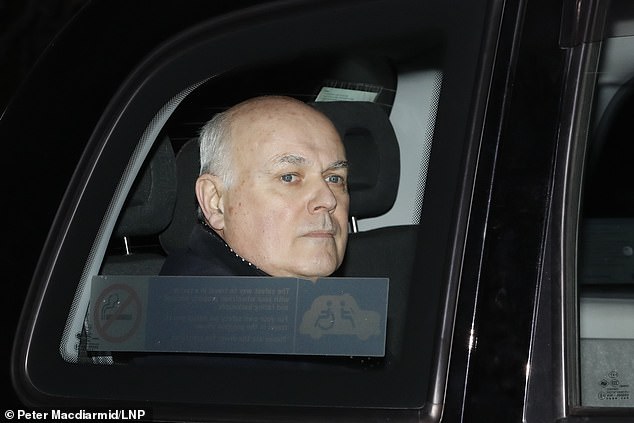 Iain Duncan Smith arrived at the Black and White Ball, a fundraiser held by the Conservative Party. Brexiteers were slammed in Brussels today before Mrs May goes over renegotiate

He states: ‘This would include alignment with the union customs code, a common external tariff and an agreement on commercial policy that includes a UK say on future EU trade deals.

‘We believe that a customs union is necessary to deliver the frictionless trade that our businesses, workers and consumers need, and is the only viable way to ensure there is no hard border on the island of Ireland.’

In Brussels however the PM will be focusing on winning over the bloc.

She will state that both sides must ‘show determination’ to get an exit deal ‘over the line’.

Downing Street said the EU meetings are part of a process leading to the Government bringing back a ‘meaningful vote’ on Brexit to the Commons as soon as possible.

Mrs May travels to Brussels as a war of words between London and Brussels erupted after Mr Tusk said there was a ‘special place in hell’ for people who promoted Brexit without any plan for delivering it.

When she returns to the UK, Theresa May will have to deal with Corbyn’s letter.

He said Labour wants close alignment with the single market ‘underpinned by shared institutions and obligations, with clear arrangements for dispute resolution’.

Mr Corbyn also called for ‘dynamic alignment on rights and protections so that UK standards keep pace with evolving standards across Europe as a minimum’. 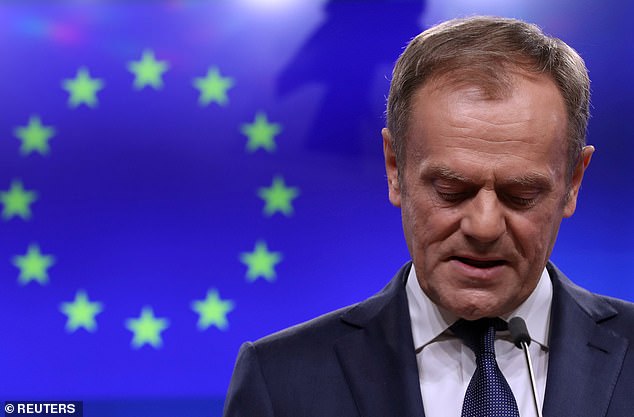 Labour wants commitments on participation in EU agencies and funding programmes, as well as ‘unambiguous agreements on the detail of future security arrangements, including access to the European Arrest Warrant and vital shared databases’.

Mr Corbyn also calls for further talks with the PM ‘with the aim of securing a sensible agreement that can win the support of parliament and bring the country together’.

The Labour leader tells the PM that last month’s rejection by MPs of her Withdrawal Agreement means a different approach is needed.

He writes: ‘Without changes to your negotiating red lines, we do not believe that simply seeking modifications to the existing backstop terms is a credible or sufficient response either to the scale of your defeat last month in Parliament, or the need for a deal with the EU that can bring the country together and protect jobs.’

The Labour leader states: ‘There is, as was demonstrated last week, a clear majority in Parliament that no deal must now be taken off the table and that there can be no return to a hard border in Northern Ireland in any circumstance.

‘We recognise that any negotiation with the EU will require flexibility and compromise.

‘Our first priority must be a deal that is best for jobs, living standards, our communities, in the context of increased and more equitable investment across all regions and nations of the UK.’