US defence chief outlines the US’s new security strategy, warns of diminished capability ‘in every domain of warfare’. 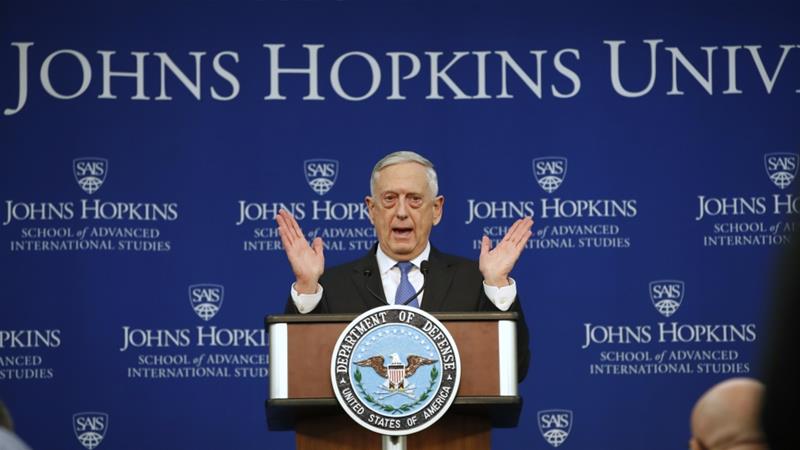 Mattis, unveiling the US’s first new defence strategy in a decade on Friday, said the US is facing growing threats from countries such as Russia and China, calling them “revisionist powers” that “seek to create a world consistent with their authoritarian models”.

“Today, America’s military reclaims an era of strategic purpose and we’re alert to the realities of a changing world and attentive to the need to protect our values and the countries that stand with us,” he said at the School of Advanced International Studies in Washington.

“Adapting to today’s realities, this strategy expands our competitive space, prioritises preparedness for war, provides clear direction for significant change at the speed of relevance, and builds a more lethal force to compete strategically.”

China was quick to respond to Mattis’ comments, with a spokesperson for the country’s embassy in the US saying Beijing is seeking “global partnership, not global dominance” in a statement on Saturday.

“China and the United States shoulder important responsibilities and have extensive common interests in upholding world peace and stability and promoting global development and prosperity,” the statement said.

“It is regrettable that instead of having a normal dialogue, instead of using the basis of international law, the US is striving to prove their leadership through such confrontational strategies and concepts,” he told reporters at the UN headquarters, in New York, on Friday.

Mattis, however, said that the US has lost its “competitive edge … in every domain of warfare” and now has an “overstretched and under-resourced military” created by ongoing conflicts in Afghanistan, Iraq and Syria, technological change and defence spending caps imposed by Congress.

“We need Congress back in the driver’s seat of budget decisions, not in the spectator seat of Budget Control Acts’ indiscriminate and automatic cuts. We need a budget and we need budget predictability if we’re to sustain our military’s primacy,” he said.

US President Donald Trump has pledged to increase the US’ defence spending by $54bn as part of his administration’s 2018 budget.

However, the federal government shut down on Saturday after members of Congress failed to reach an agreement on the government’s spending plans.

Trump said in a post on Twitter that the situation was “not looking good” for the US military as a result of the impasse.

“Not looking good for our great Military or Safety & Security on the very dangerous Southern Border. Dems want a Shutdown in order to help diminish the great success of the Tax Cuts, and what they are doing for our booming economy,” he said.