A MasterChef star who assaulted a 16-year-old girl was given an hour to pack his belongings and ordered to leave the reality cooking show a day after he was charged by police last year, a court has been told.

Three counts of sexual assault against chef Ben Ungermann were struck out in the Melbourne Magistrates Court on Friday after a resolution was reached between the prosecution and defence earlier this week. 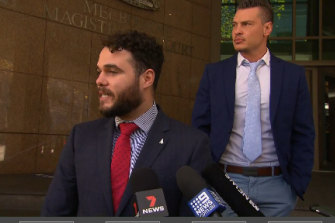 He was instead charged with a single count of common law assault, and ordered by the court to partake in a diversion program which means he avoids a criminal conviction.

The charge relates to an incident which occurred on February 23 last year in a room at a Docklands hotel, where Mr Ungermann was staying with other contestants while filming MasterChef: Back To Win in Melbourne.

In an agreed summary of the incident read out on Friday, the court heard Mr Ungermann broke up with his fiancee – South African TV star Leigh-Anne Williams – on the night of February 23.

He told the the teenage victim about it, and she began comforting him before he said he was going to get “shit-faced”. They both had several drinks. Later in the night, Mr Ungermann lay down on a bed and gestured for the girl to give him a hug.

She said no, and he placed his hand under her armpit and across her right breast over her clothing and pulled her down onto his chest. His hand remained there for two seconds, the court heard.

The victim pulled away and became visibly upset before texting her boyfriend and leaving the room. She reported the incident to police and Mr Ungermann was arrested on March 6.

Mr Ungermann flew to Melbourne and was present in court on Friday morning, accompanied by lawyer and fellow former MasterChef contestant Ben Bullock.

His barrister Abbie Roodenburg told the court her client had barely worked and his reputation had been severely damaged after the charges were laid and published widely in the media.

He was working in retail when he was selected to go on MasterChef in 2017. Filming lasted for at least nine months, during which he had no access to his phone or wallet and his movements were “strictly controlled”. Being on television significantly changed his life, his lawyer said. 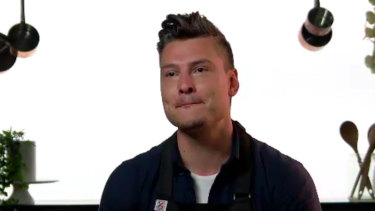 “He became a public personality who was awarded sponsorships and ambassadorships for a number of brands,” she said. It was through these deals that he made his income, and he worked in Indonesia, the Netherlands and South Africa.

He was chosen for the all-star season of MasterChef last year, but Ms Roodenburg said as soon as he was charged he was “given an hour the following day to pack his things and leave the MasterChef show”.

She said his arrest was an “incredibly shocking experience”, with two plain-clothed detectives and officers in tactical gear arriving at his Melbourne hotel room door and arresting him before he was left in an interview room for four hours before being spoken to by police.

“That really was the start of what has been a really stressful period,” said Ms Roodenburg.

He returned to Queensland and all his deals with businesses and brands were cancelled. He worked at a restaurant for several months but then had a heart attack at the end of July last year.

In November, he travelled to Sydney on the understanding there was a job offer but when this fell through he entered a “very dark” period of his life and attempted suicide.

Medical records show he is unable to work until June 9 this year because of his mental health issues.

In recommending a diversion, Ms Roodenburg said the assault, which she described as “out of character” for Mr Ungermann, was at the lower end of the scale. “It’s more than a mere touch but it’s not a forceful touch, not a touch that caused injury.”

A diversion was also recommended by the prosecutor on behalf of police.

The victim asked to address the court so she could describe the effect the offending had on her, however magistrate Mia Stylianou refused the application on the basis that her statement touched on aspects of the sexual assault charges which had been struck out.

However she read the statement to herself and said she would take it into account.

“The impact on [the victim] cannot be underestimated,” she said.

Ms Stylianou ordered Mr Ungermann to undertake counselling and mental health treatment, make a $1000 donation to the White Ribbon foundation and write a letter of apology to the victim.

Mr Ungermann agreed to the diversion, a court program usually used with first-time offenders in which a guilty plea isn’t entered but the accused person has to accept responsibility for the offending.

Outside court Mr Bullock said his former TV show colleague was now hoping to move on with his life. “Benny has been dealing with these charges now for more than 12 months, so we welcome the withdrawal of the sexual assault charges which have been denied the whole time,” Mr Bullock said. “We also welcome the opportunity for Benny to clear his name. It’s really just about him going forward now and moving on with his life.”