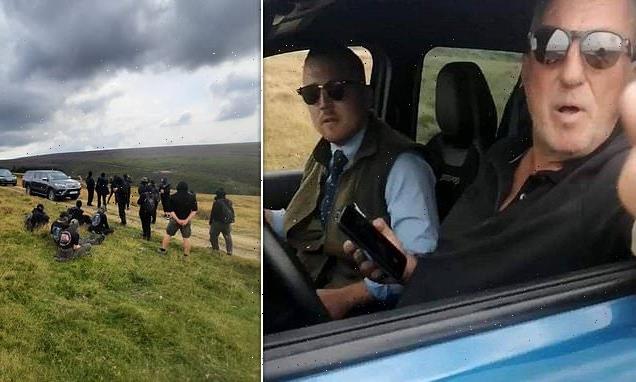 Lord Botham was confronted by the protestors as he went shooting with a group of fellow hunters in the Peak District last week.

The police were called as the saboteurs blocked vehicles used by ‘Beefy’ and his friends from moving, while the former all-rounder was seen arguing with them.

As a result of the actions of the anti-hunt activists the expedition onto Snailsden Moor, near Penistone, on Tuesday, August 16, had to be abandoned. 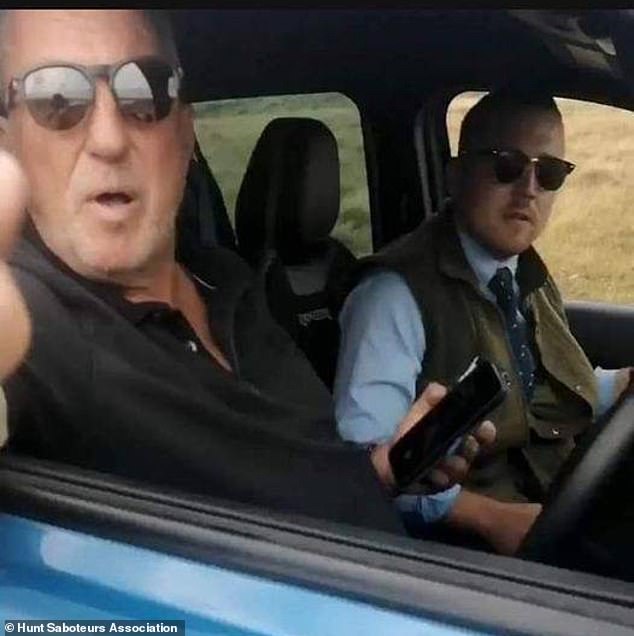 Lord Ian Botham (pictured left) was on a grouse shoot with friends in the Peak District when masked saboteurs arrived. Here Lord Botham is pictured behind the wheel of his 4×4 on the hunt 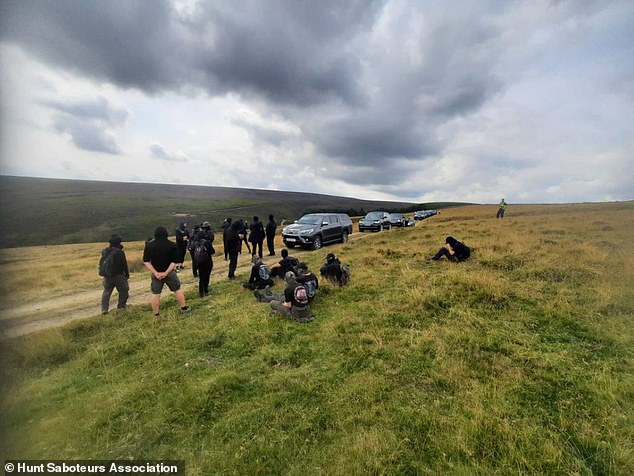 The group of anti-hunt activists disrupted the expedition and blocked vehicles from moving on August 16. Pictured are saboteurs standing in front of the the hunt’s vehicles

The protestors were from the Hunt Saboteurs Association – an organisation that sets out to deliberately disrupt and block countryside activities such as trail hunting and grouse shooting.

On its website the organisation crowed: ‘Lord Ian “Beefy” Botham is amongst the many grouse shooters heading home tonight with an empty bag, as sabs continue their rolling action across the north of England.

‘Botham’s Peak District shoot was located in the nick of time. A line of ‘beaters’ – who use flags and whistles to scare terrified birds towards the guns – was assembling, so brave sabs took to the moor to place themselves between the grouse and the guns.

‘With the beaters completely outmaneuvered, the shooters wisely returned to their lodge. From here a stand-off ensued, before the entire shooting party retreated off the moor.’

It added it would keep disrupting hunts, quoting one unnamed saboteur as saying: ‘Since last Friday sabs have been in action across the Yorkshire Dales and Peak District.

‘We have saved hundreds – perhaps thousands – of birds from being blasted out of the sky and drawn further attention to the cruelty and ecological destruction inherent in this outdated activity.

‘While others talk, we act: and our campaign against grouse shooting goes on.’ 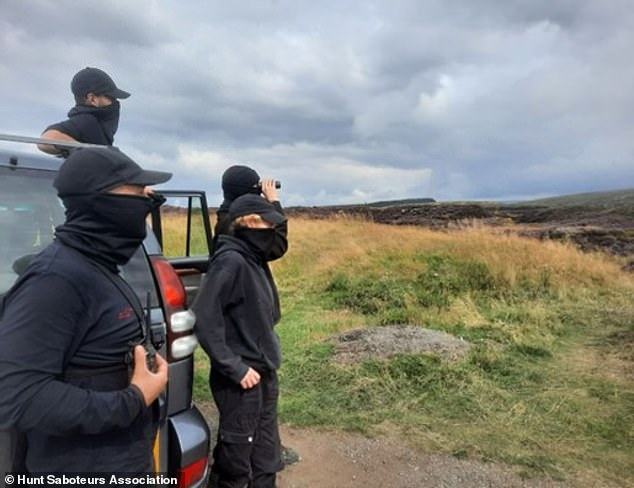 The Hunt Saboteurs Association bragged Lord Botham was ‘amongst the many grouse shooters heading home tonight with an empty bag’. Pictured are some of the masked saboteurs who disrupted the hunt 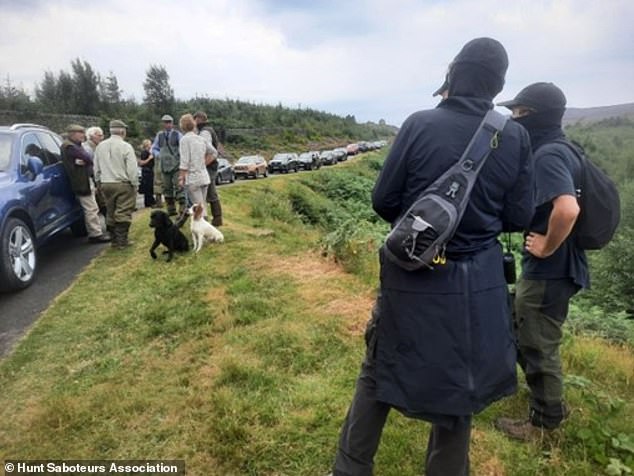 Police were eventually called to the scene, with reports one man was arrested at the scene. Pictured are hunt saboteurs looking at members of the shooting party

The Sun reports South Yorkshire Police attended and arrested a man in his 50s on suspicion of having a bladed article.

Lord Botham is a well-known supporter of game shooting, as well as angling.

He was involved in a row with Chris Packham and called for him to be sacked in 2020 after accusing the BBC Springwatch presenter of wanting to ban game shooting.

In response to the news that ‘Beefy’s’ shoot was disrupted by the sabs last week, Packham tweeted: ‘Oh dear, what a shame, next… More top work by @HuntSabs.’ 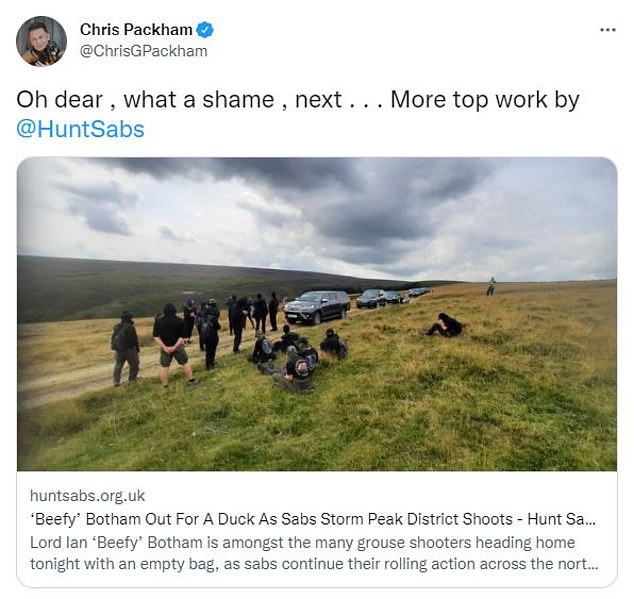 BBC Springwatch presenter Chris Packham, who Lord Botham has previously called to be sacked, had his say on the saboteurs actions on Twitter 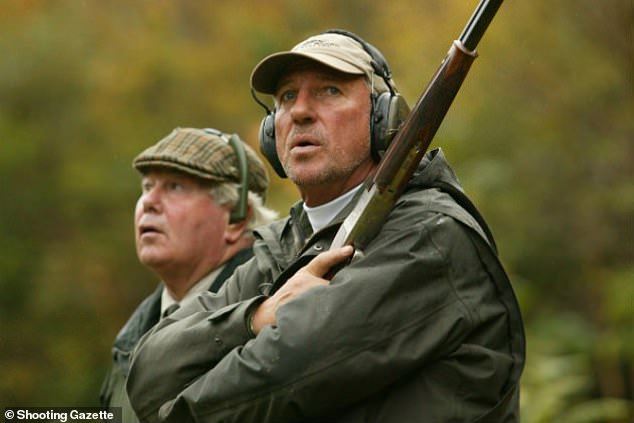 Lord Botham has been an ardent supporter of game shooting, saying it brings a lot to the countryside economy. Here he is pictured holding a rifle and earing ear muffs while on a shoot

The Ashes legend has previously called game shooting vital to the countryside economy and railed against attempts to get it banned.

In 2021 he told the Daily Telegraph: ‘The haters of shooting have made a strategic mistake in thinking they could make the sector into fox-hunting Mark II.

‘With fox-hunting, the Marie Antoinette view of the countryside won the day – the public preferring to pretend that foxes don’t slaughter countless birds day and night.

‘Game shooting is different. It pulls together broad communities to bring in the harvest from the skies.

‘For some, shooting is just a hobby. However, for thousands it is their livelihood – as gamekeepers, hoteliers and taxi drivers.’