Feeling the heat? Mark Zuckerberg applies sunscreen as he attends Sun Valley conference with Anderson Cooper and Michael Bloomberg – after Facebook was hit with a $5 BILLION fine

Mark Zuckerberg appeared to be feeling the heat as he attended the annual Allen & Company Sun Valley Conference in Idaho on Friday.

The 35-year-old Facebook CEO was spotted lathering on sunscreen after news his beloved company is set to be slapped with a $5 billion fine from the Federal Trade Commission.

On Friday, the FTC voted to fine Facebook the record-breaking sum following a long-running investigation into the tech giant’s repeated failures to protect its users’ privacy.

While the news is no doubt a blow for Zuckerberg, the Harvard dropout – who has reported fortune of $62 billion – will be able to share his sorrows with his equally moneyed pals at the Sun Valley Conference.

The invite-only summit, which has become known as Billionaire Summer Camp, allows the rich and powerful of the media and tech worlds to mingle with one another over the course of a week.

On Friday, Michael Bloomberg, Diane von Furstenberg and Nike founder Phil Knight were among the other VIPs seen strolling into the fourth day of the conference. 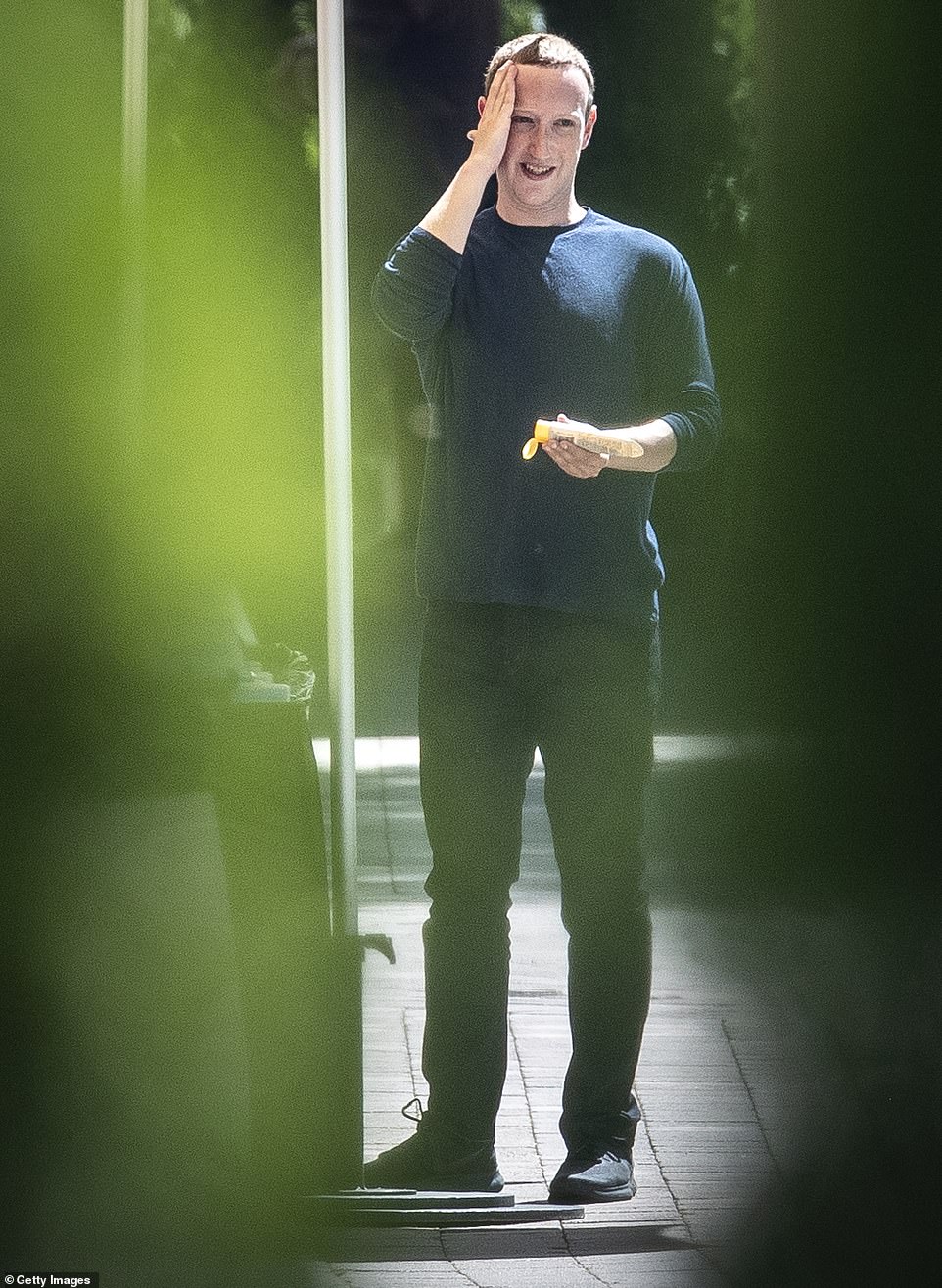 Mark Zuckerberg was spotted at the Allen & Company Sun Valley Conference on Friday, the same day the Federal Trade Commission voted to fine Facebook for its failures to protect user privacy 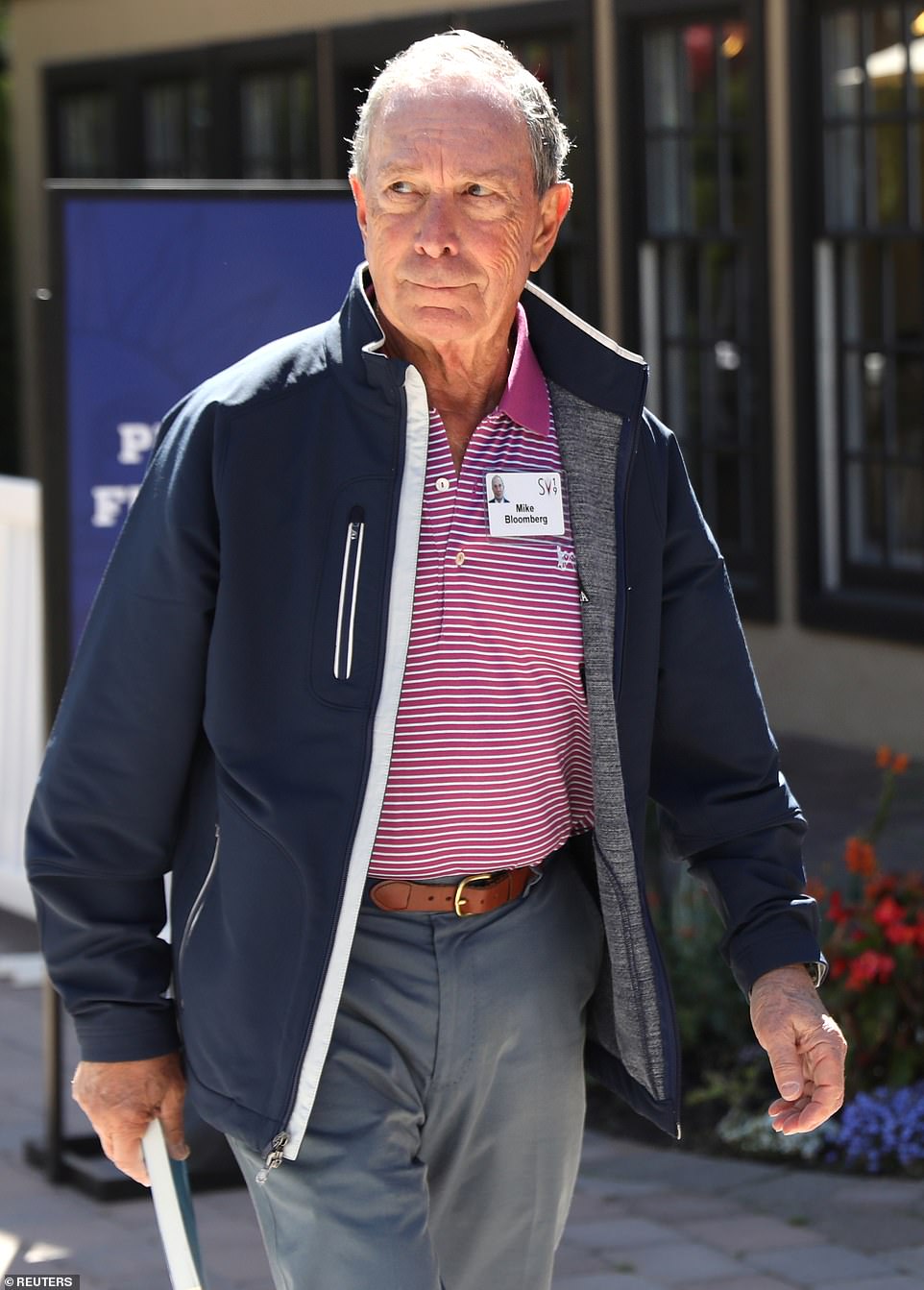 Former New York City mayor Bloomberg, who has a net worth of  $53 billion, was also spotted on Friday

The cashed-up clique proved they weren’t above dressing down for their end-of-week networking session, sporting Casual Friday ensembles that wouldn’t have looked out of place at any ordinary office.

Nike founder Knight, meanwhile, stayed loyal to his brand by wearing a pair of his own sneakers.

The 81-year-old has amassed a $35 billion fortune courtesy of his shoe and sportswear company.

Meanwhile, another fashion icon was similarly dressed down for the power summit.

Diane von Furstenburg (net worth: $1.2 billion) let her sense of style relax a little, as she rocked a gingham button-down and comfortable slides. 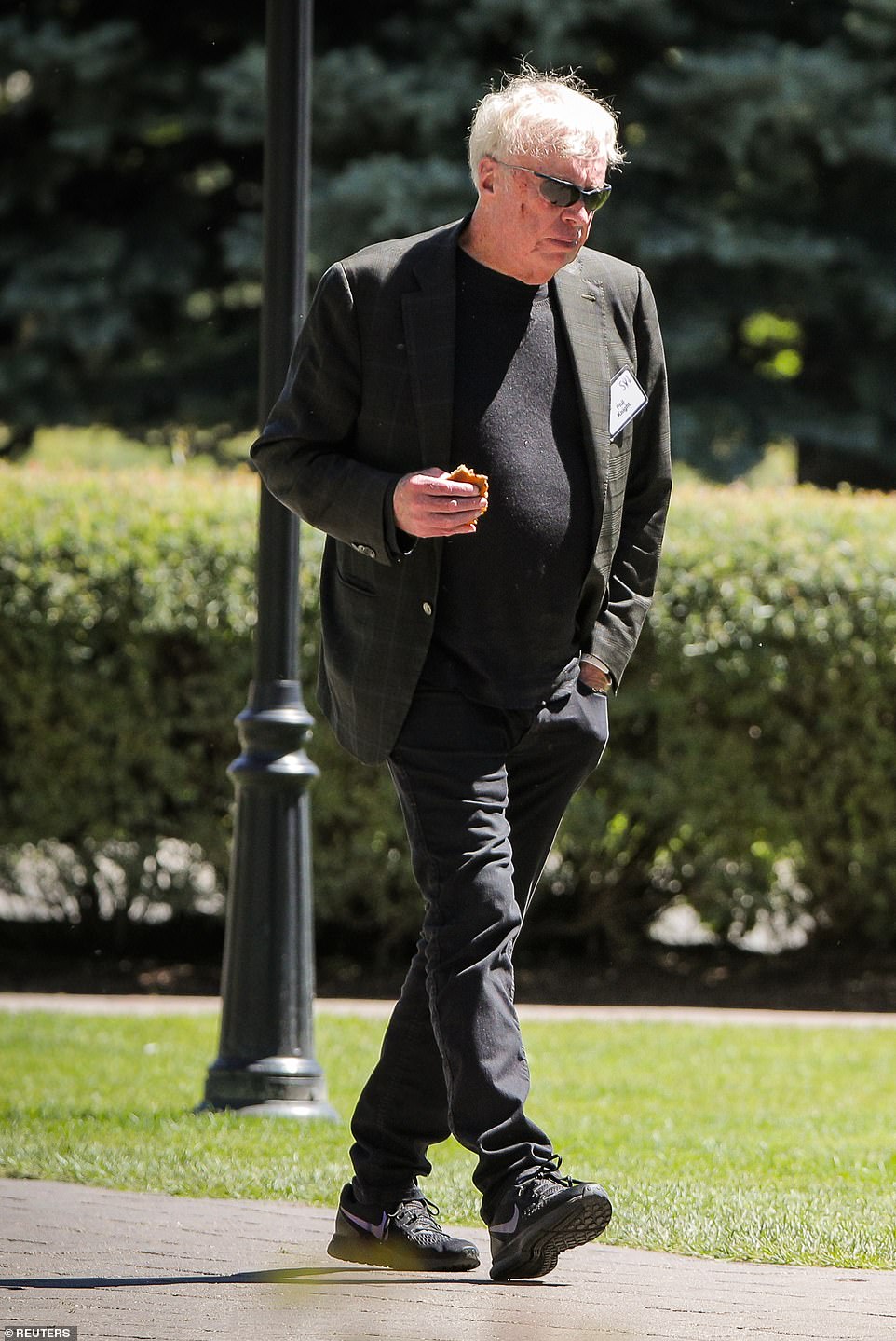 Just do it! Nike founder Phil Knight, 81, wore a pair of his own sneakers as he strolled along while eating a snack 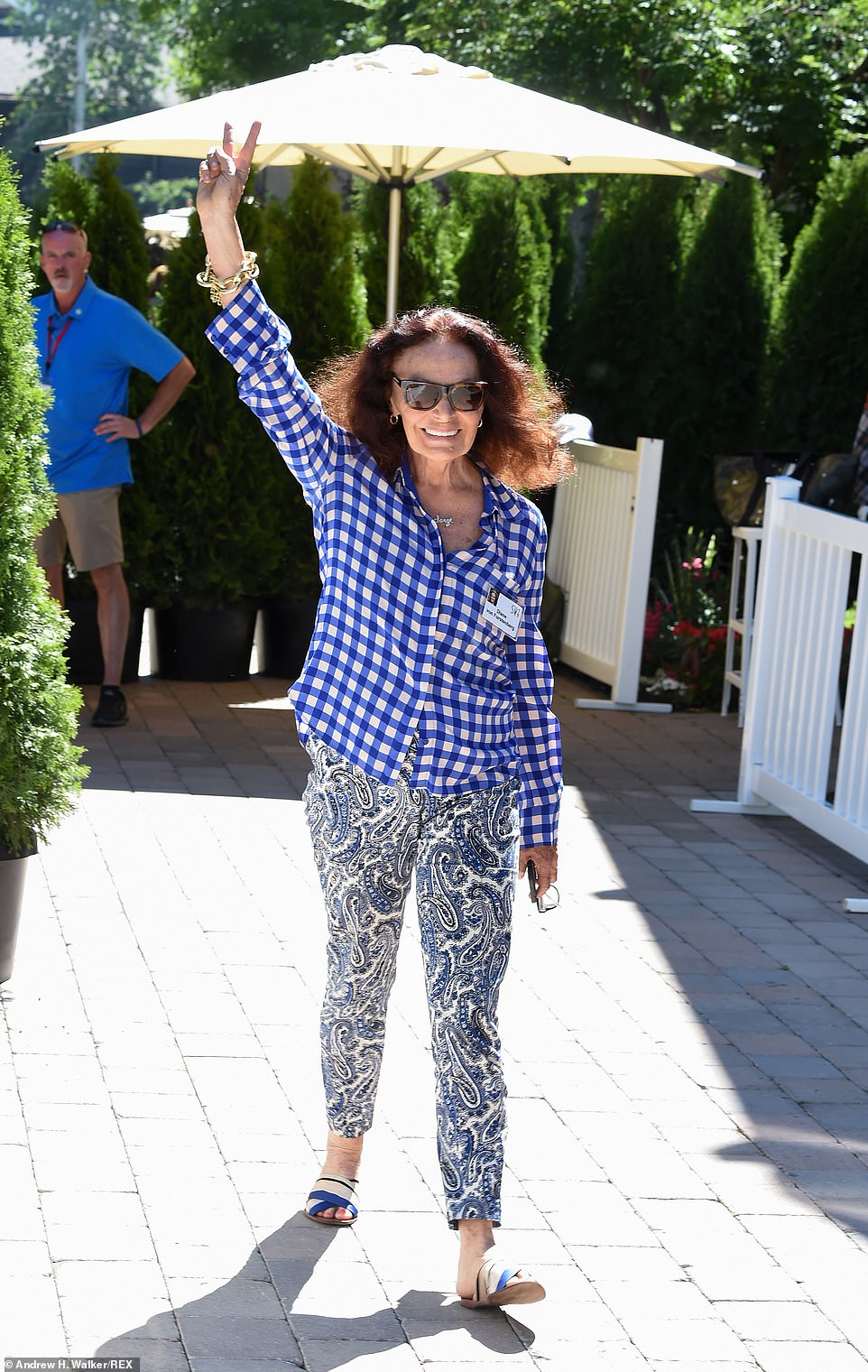 Life’s better when you’re a billionaire!  Diane von Furstenburg appeared relaxed and upbeat as she flashed a peace sign for photographers 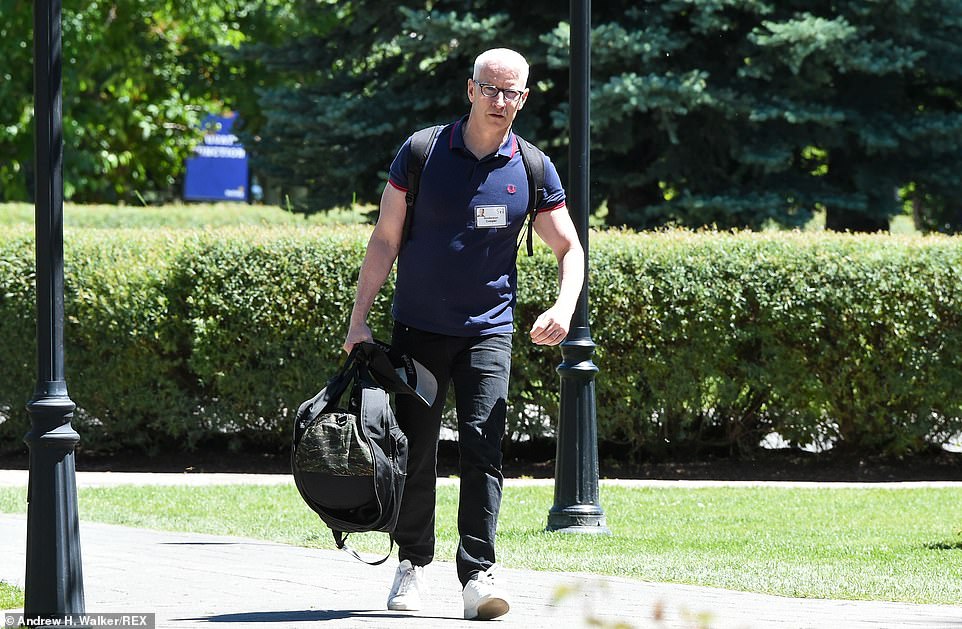 Also spotted at the conference was CNN star Anderson Cooper, who lugged along his own bags

Also spotted at the conference was CNN star Anderson Cooper, who has an estimated net worth of $120 million.

The TV anchor received just $1.5 million from the estate of his mother Gloria Vanderbilt following her recent death, according to The New York Post.

But Cooper makes up for his relatively modest bank balance with both star-power and a blue-blood lineage, meaning he’s right at home among the Sun Valley elites.

Meanwhile, a parade of other men were seen sauntering into the summit, including Apple CEO Tim Cook and Dell CEO Michael Dell.

Other Chief Executive Officers in attendance included Steve Swartz, who heads up Hearst Media, and Mary Barra of General Motors.

Barra’s appointment to her role at GM in 2014 made her the first female CEO of a major global automaker.

The businesswoman is paid handsomely for her role, with Fox Buisness reporting she took home $21.87 million in 2018. 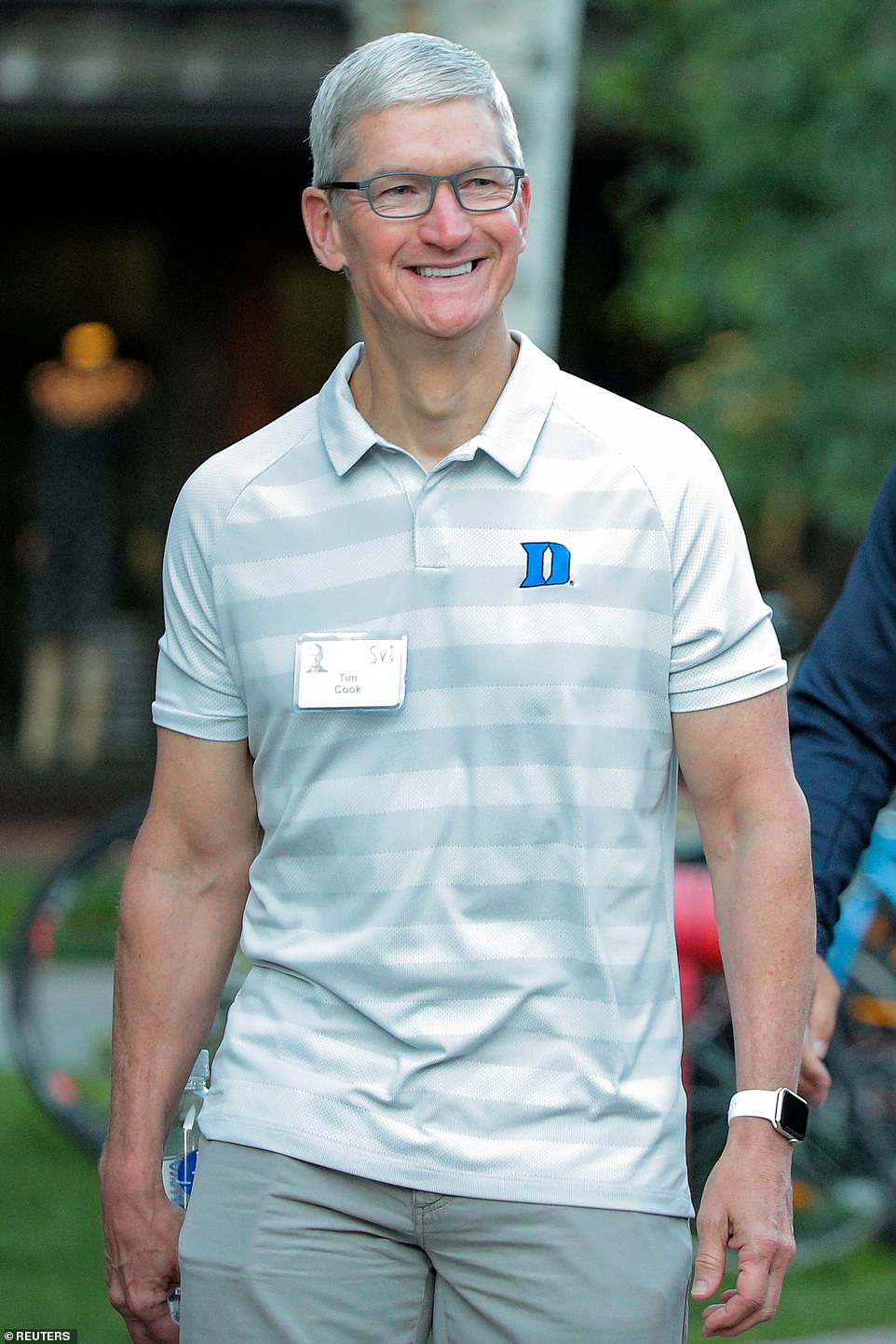 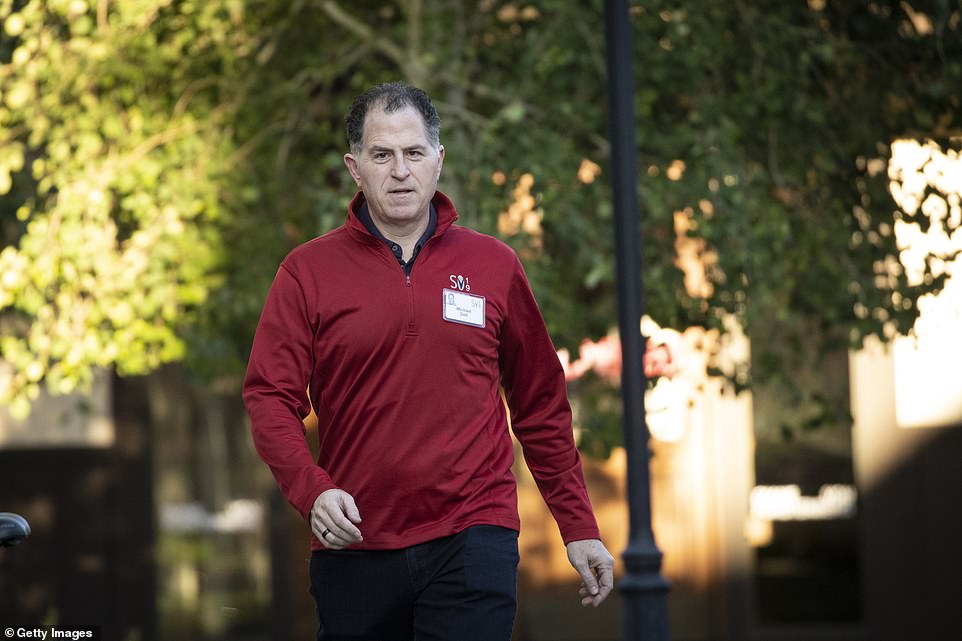 Michael Dell dressed down for the summit, disguising the fact he’s worth a whopping $37 billion 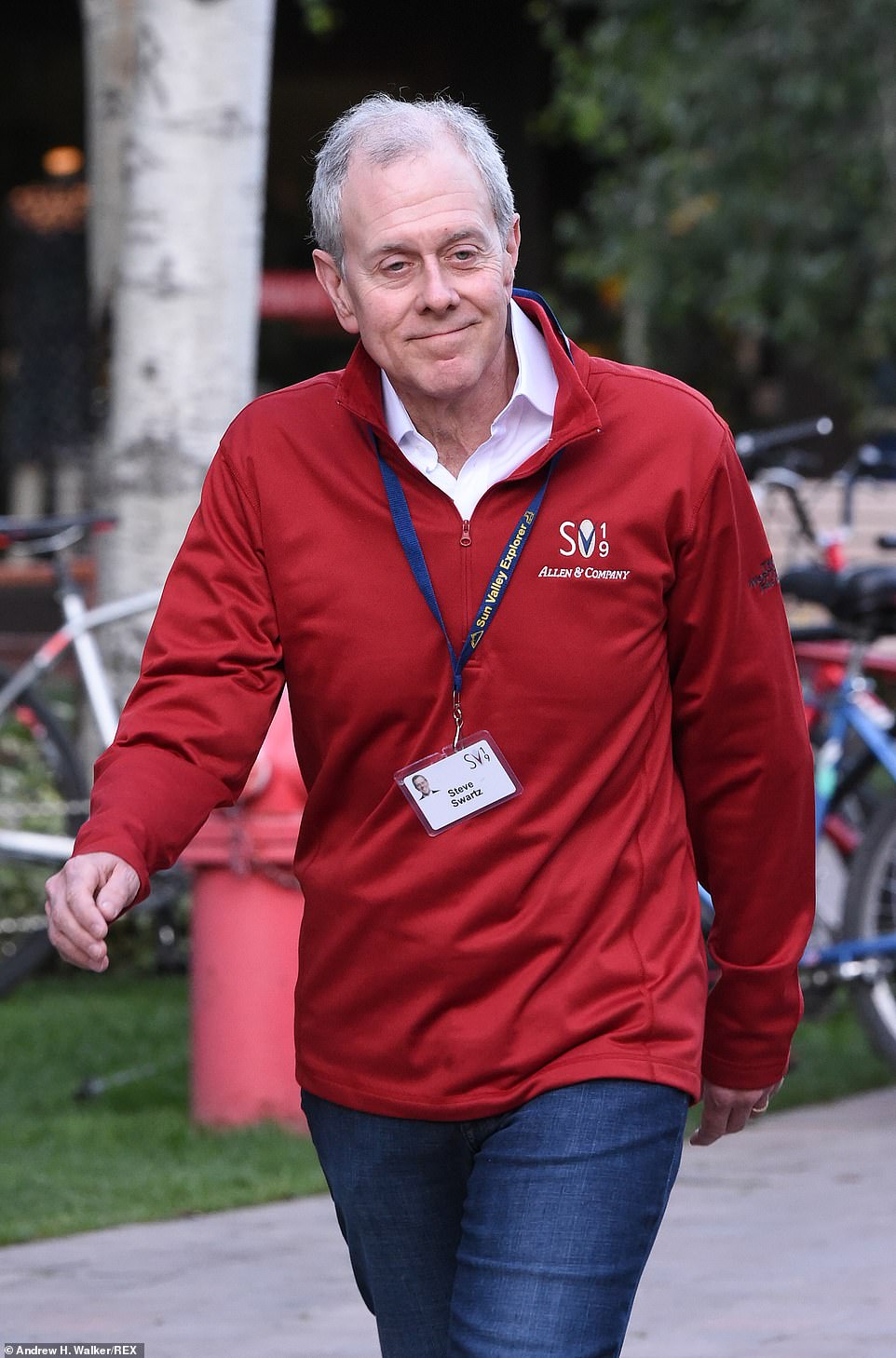 Hearst CEO Steve Swartz was snapped sauntering in to the power summit. He took helm of the media company in 2013 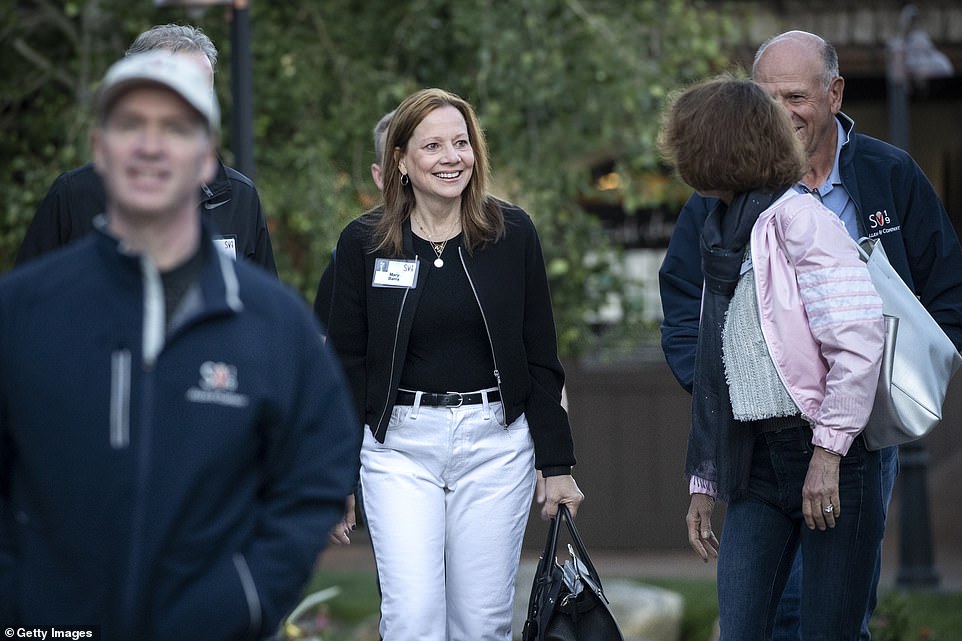 Mary Barra, CEO of General Motors, was also among the VIP attendees

The Israeli-born millionaire took the top job at the toy manufacturer just over a year ago.

There were also a number of high-powered couples at the summit proving that people don’t always have to choose between love and money.

Billionaire investor Henry Kravis strolled arm-in-arm with his wife Marie-Josee, to whom he has been married for 25 years. 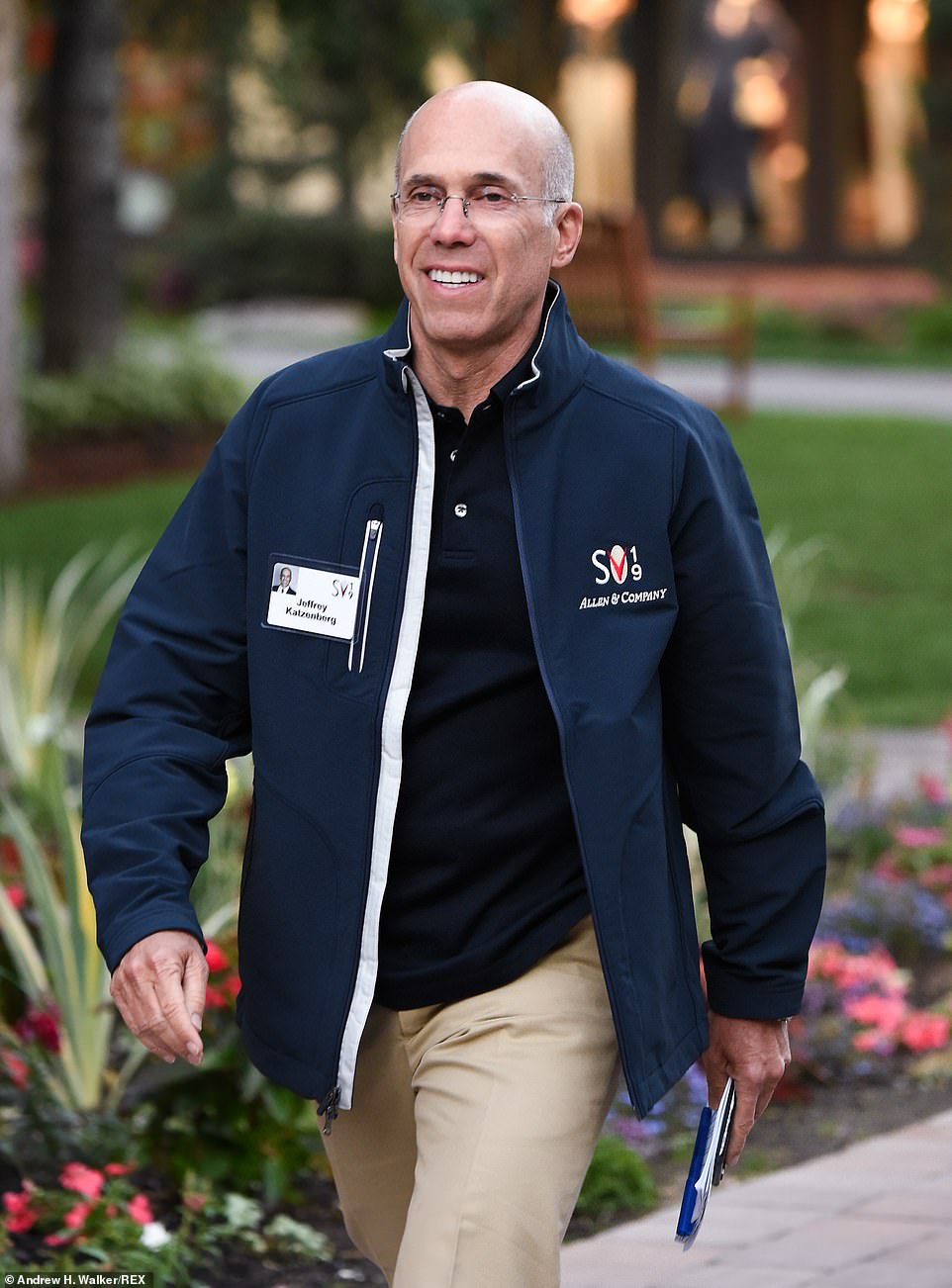 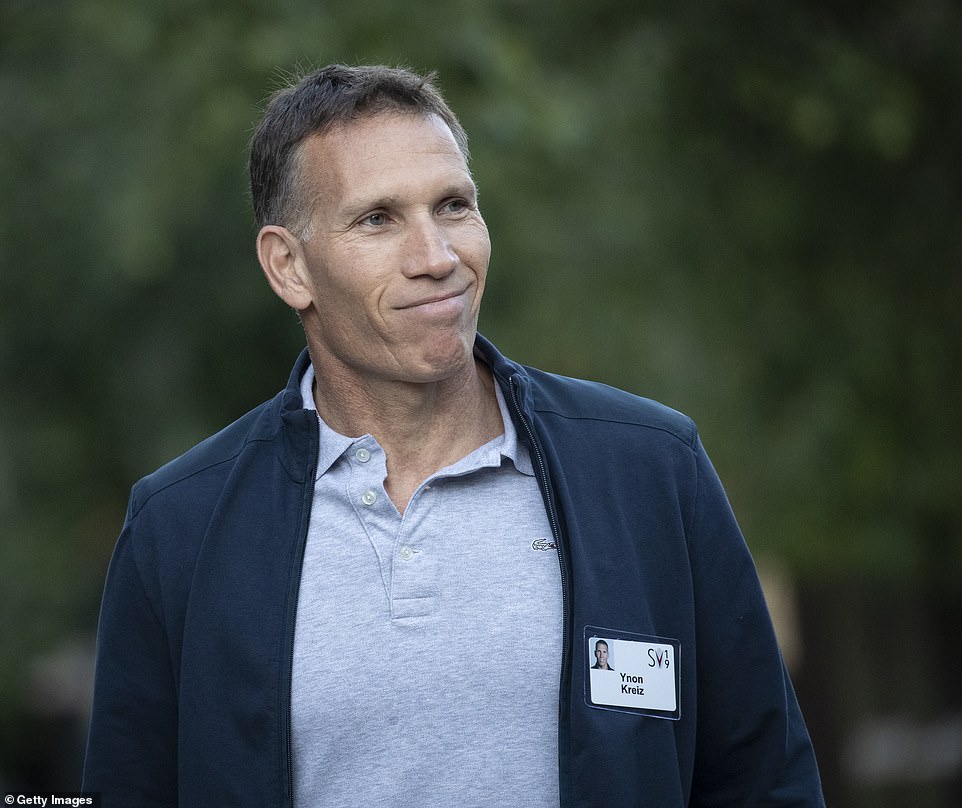 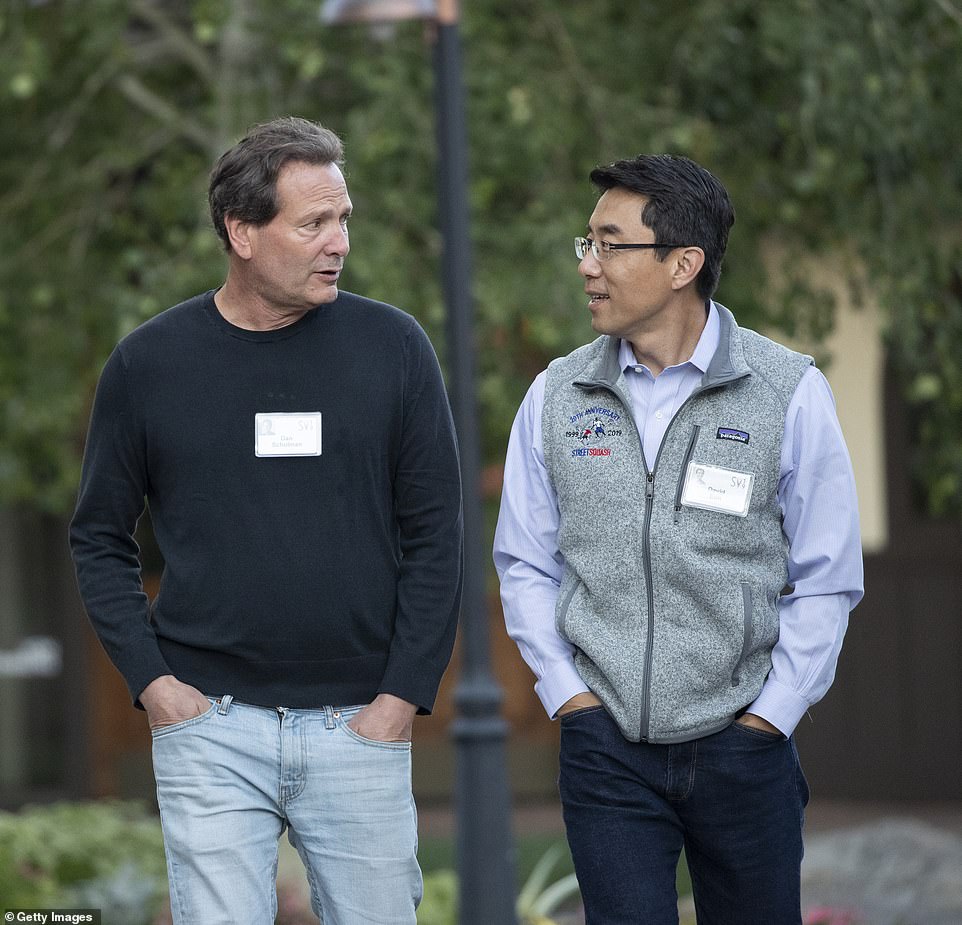 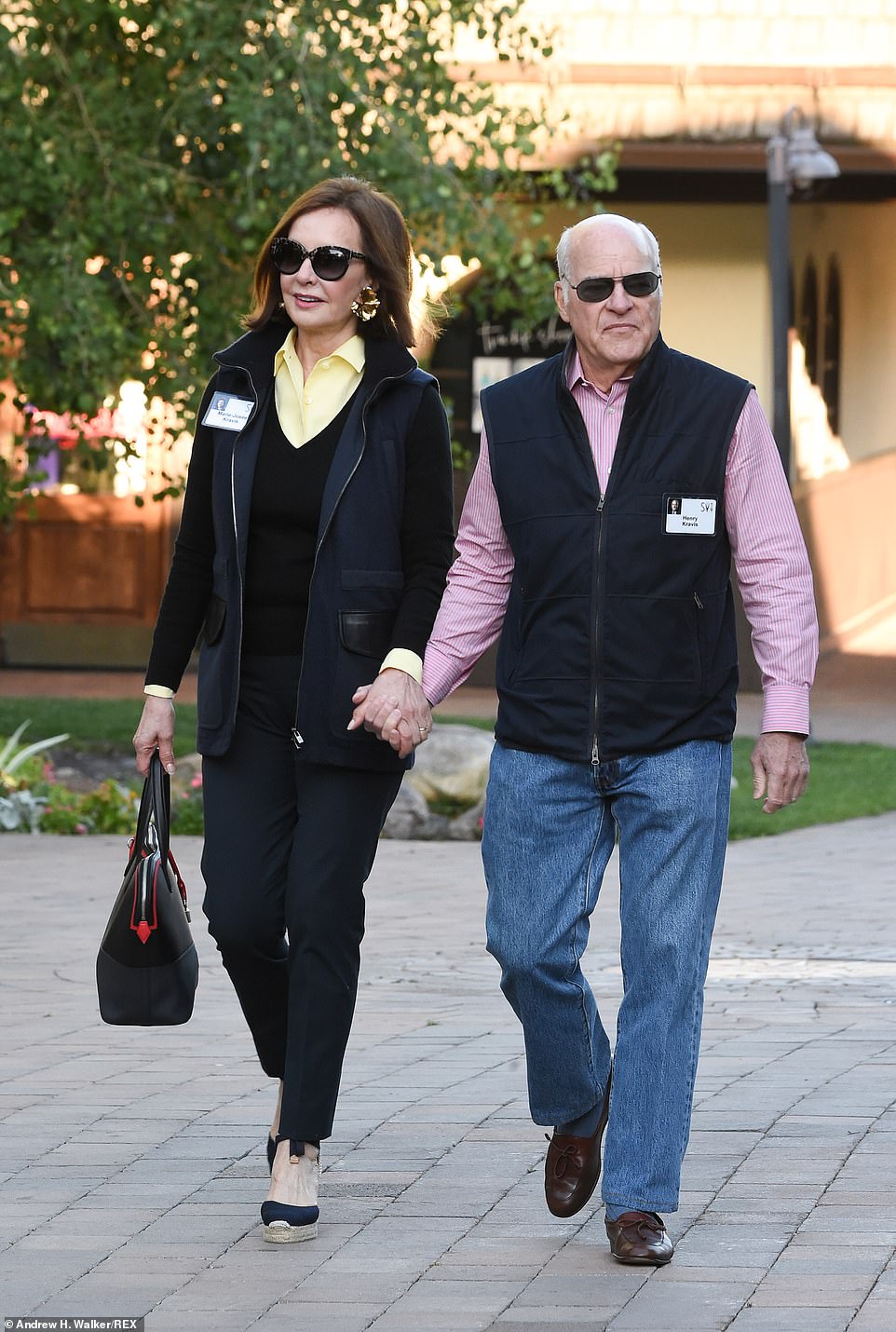 Billionaire investor Henry Kravis strolled arm-in-arm with his wife Marie-Josee, to whom he has been married for 25 years.

Former US diplomat and CEO of the Motion Picture Association of America Charlie Rivkin also brought along his wife, Susan Tolson.

The lovebirds are set to celebrate their 30th wedding anniversary next year.

However, there was one couple who were notably absent from Friday’s festivities: Jeff Bezos and Lauren Sanchez.

Amazon founder Bezos – the world’s richest man with an estimated fortune of $166 billion – is widely rumoured to be attending the Sun Valley conference.

However, there’s been no sign of the businessman, or his new flame Sanchez.

The pair went public with their relationship in February of this year – two months before Sanchez filed for divorce from her husband.

The same month, Bezos’ estranged wife, MacKenzie, announced that she and Jeff had reached a $35 billion divorce settlement.

She is now the third richest woman in the world. 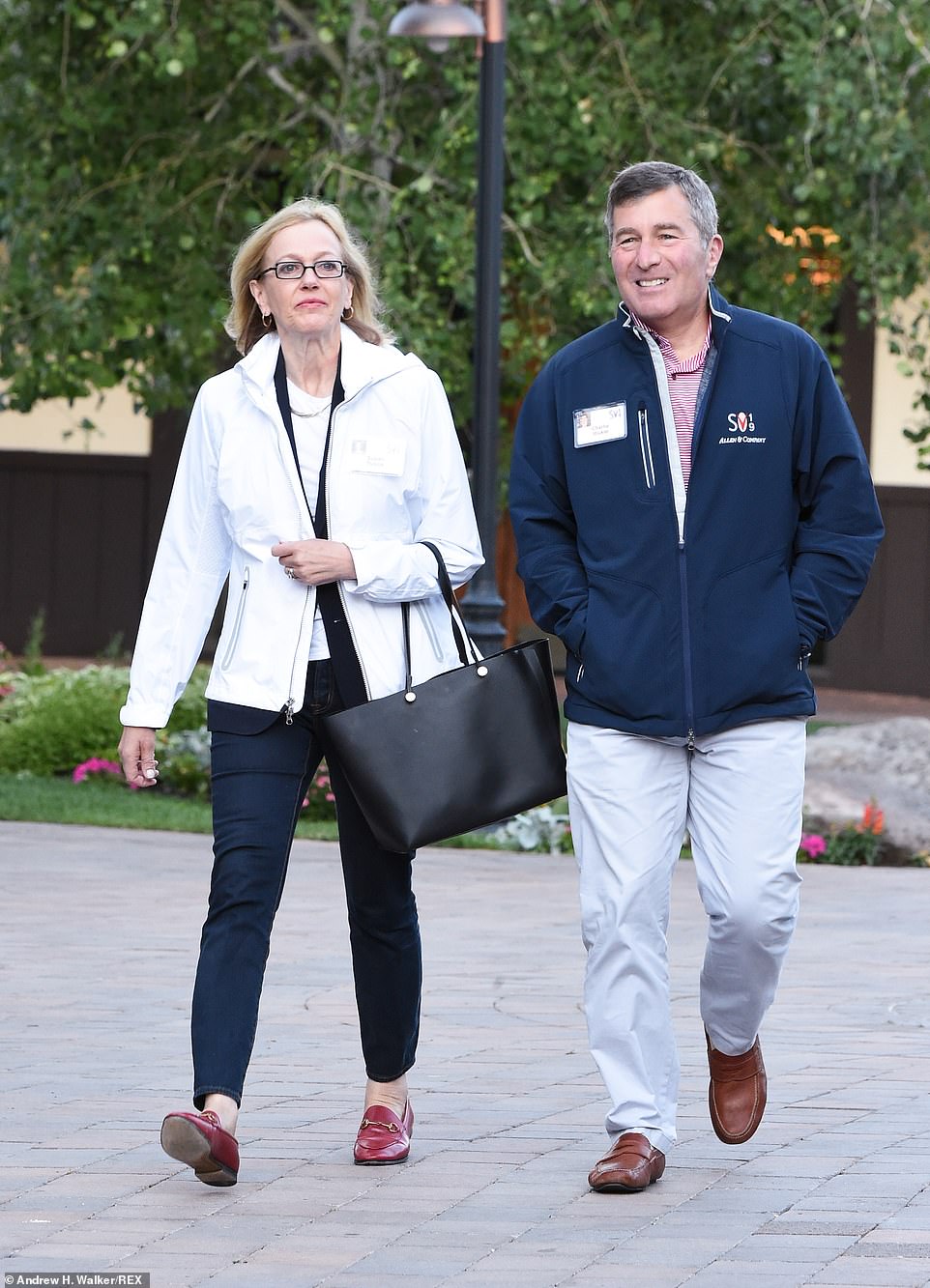 Former US diplomat Charlie Rivkin also brought along his wife, Susan Tolson. The lovebirds are set to celebrate their 30th wedding anniversary next year 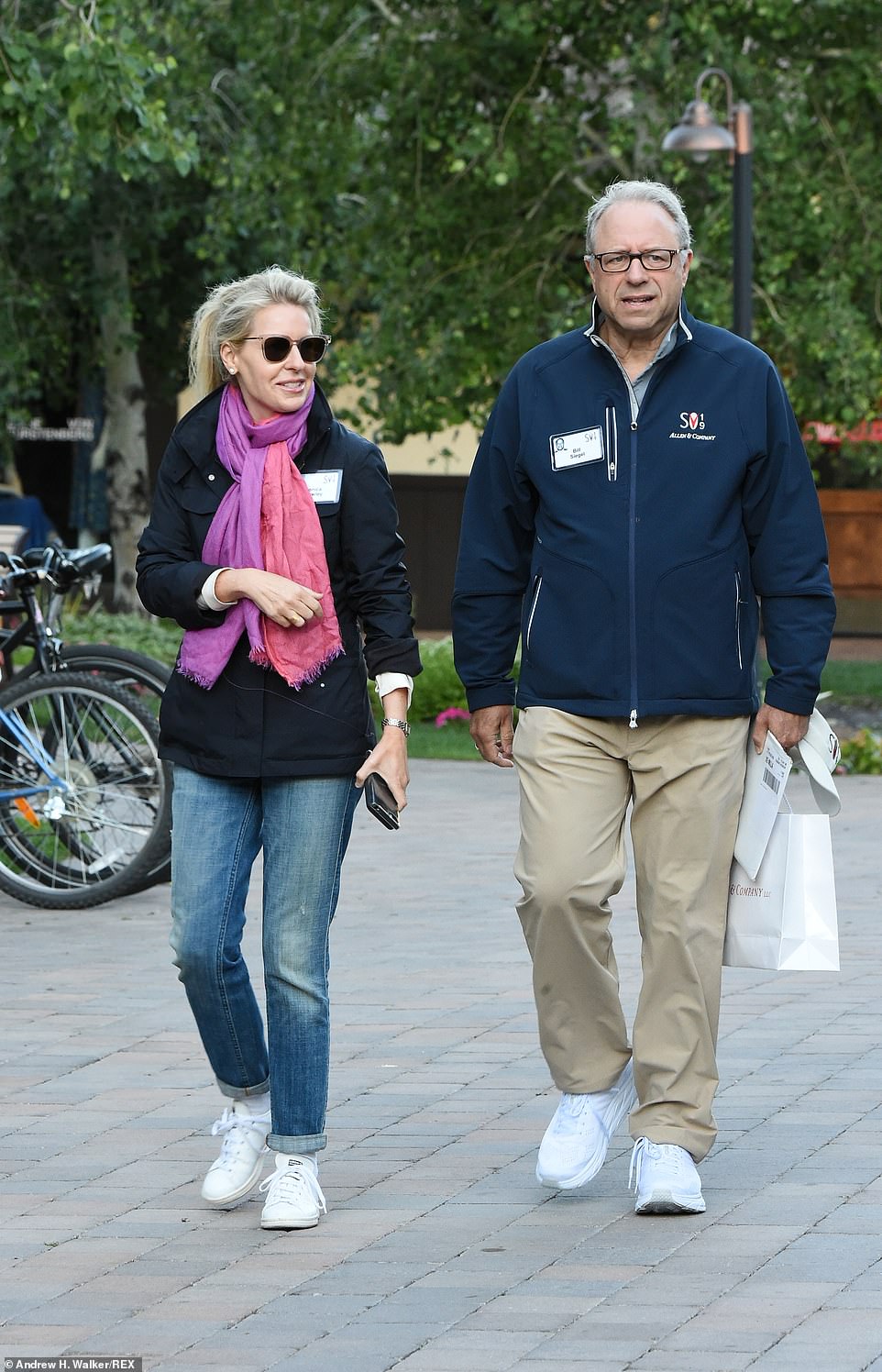 ‘This Is Us’ Season 5: Mandy Moore Reveals the Rebecca Storyline Writers Are ‘Anxious to Explore’