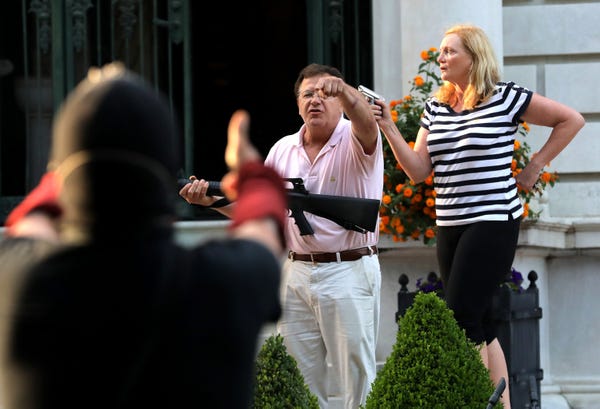 A grand jury has indicted Mark and Patricia McCloskey, the white St. Louis couple who aimed their guns at a Black Lives Matter protest in June.

The McCloskeys, both personal-injury lawyers, face charges of exhibiting guns at a protest and evidence-tampering, court documents viewed by Insider show.

Both McCloskeys were initially charged with one count of unlawfully exhibiting a weapon, but a grand jury found the new charges to be more appropriate.

The couple rose to internet infamy following the June protest when disturbing video showed the couple coming out of their home to confront protesters who were walking by.

Mark McCloskey, barefoot in an open-collar pink golf shirt, was seen carrying what appeared to be a semiautomatic rifle with an extended magazine. His wife held a small handgun.

St. Louis Circuit Attorney Kimberly Gardner announced soon after the video surfaced that her office would investigate whether any laws were broken.

At that time, the couple also released a statement denying they broke any laws.

They said they "support Black Lives Matter" and that it was violence and destruction of property by a small group of white "agitators" that caused them to fear imminent harm and arm themselves.

"The peaceful protesters were not the subject of scorn or disdain by the McCloskeys," the statement reads. "To the contrary, they were expecting and supportive of the message of the protesters."

There was no violence captured on video other than the couple's threatening behavior.

The couple's attorney Joel Schwartz told Insider Tuesday afternoon that he didn't have confirmation that the indictment was returned and hadn't seen the court documents.

"I don't have independent confirmation. I'm getting secondhand information from a multitude of sources that there has been an indictment. And if that is in fact the case, we will deal with it accordingly and fight the charges just like I've stated in the past," he said. "I see nothing that has changed as far as our defense."

The McCloskeys are due back in court on October 14, according to court documents.

The McCloskeys have had a history of conflicts with their neighbors and litigious behavior, according to an investigation by the St. Louis Post-Dispatch.

In 2013, Mark McCloskey destroyed beehives being tended to by kids at a synagogue next door, leaving a note that the "structure constitutes a trespass," the paper reported. The note also threatened to sue the group if the destroyed hives weren't cleaned up.

The Jewish Central Reform Congregation constructed beehives just outside the McCloskeys' northern wall and planned to harvest the honey as part of a Rosh Hashanah tradition of eating apples and honey to ensure a "sweet new year," The Post-Dispatch reported.

"The children were crying in school," Rabbi Susan Talve told the local paper. "It was part of our curriculum."

That wasn't the couple's first dispute.

In 1992, Patricia McCloskey was impeached from the neighborhood's trustee association when the other members accused her of being homophobic, the paper reported.

She was fighting to enforce a rule that prohibited unmarried couples from moving into Portland Place — the upscale neighborhood where they reside. Mark McCloskey claimed that it wasn't about the couple being gay, but rather they didn't want any unmarried couple moving in.

The couple spoke at this year's Republican National Convention, where they repeated the false Trump campaign claim that Democrats will bring "crime and lawlessness" into "thriving" suburban neighborhoods.