The Marine Corps have admitted that a second man in the iconic Iwo Jima photo taken in 1945 was misidentified.

An investigation by the Marines and the FBI’s Digital Evidence Lab confirmed that it was Corporal Harold ‘Pie’ Keller and not Private first corporal Rene Gagnon who was captured in the Pulitzer Prize-winning photograph 74 years ago.

The classic image – taken by Associated Press photographer Joe Rosenthal – shows six Marines erecting a US flag during a bloody battle on the Japanese island of Iwo Jima in February 1945. 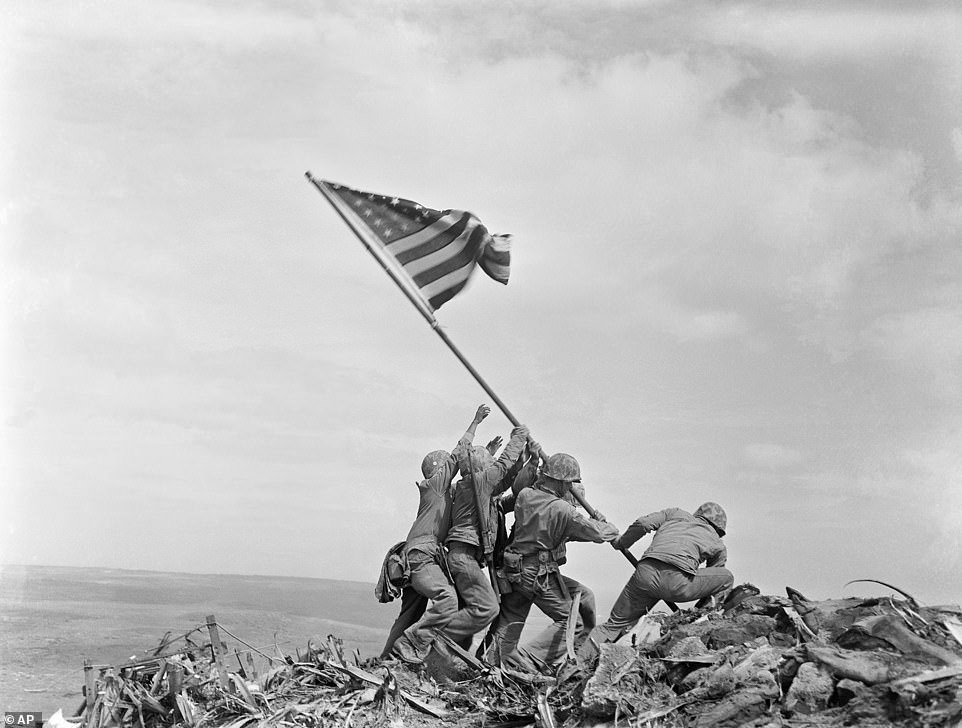 It was February 23, 1945 when six men of the U.S. Marines of the 28th Regiment, 5th Division, raised the American flag atop Mt. Suribachi, Iwo Jima, Japan 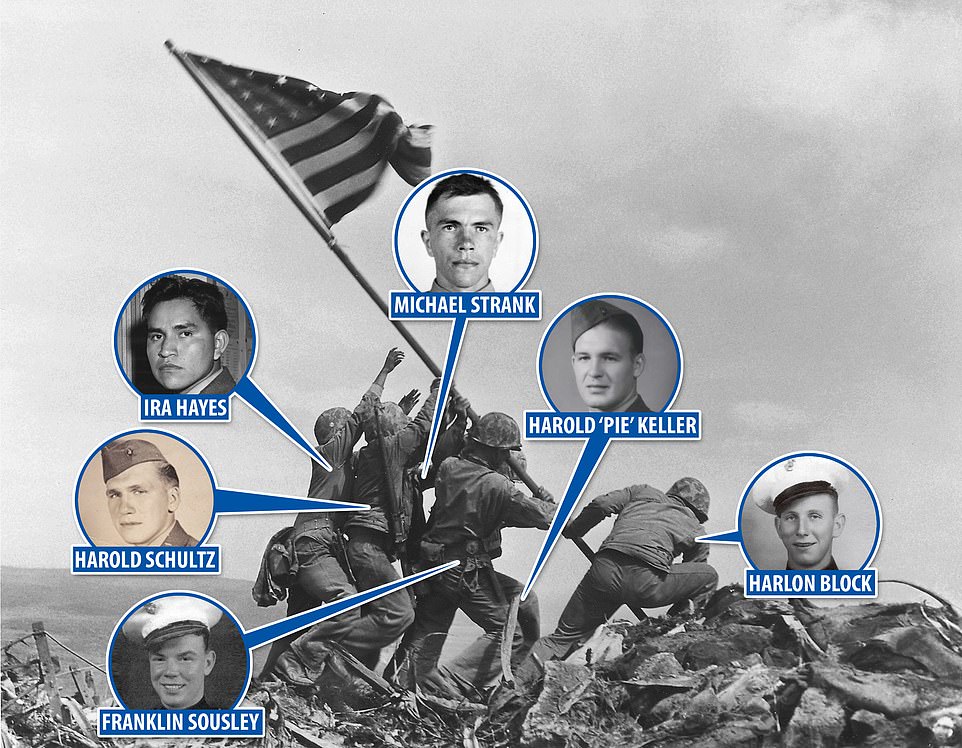 The men are, from left to right, Ira Hayes, Harold Henry Schultz, Michael Strank, Franklin Sousley, Harold ‘Pie’ Keller and Harlon Block. Keller was confirmed this week, while Schultz was confirmed in 2016

The men have become immortalized in Marine Corps lore, and each is featured on an enormous bronze statue based on the photograph in Arlington National Cemetery.

Unfortunately, Rosenthal didn’t get the names of the men but the photo was immediately celebrated in the U.S. and President Franklin Roosevelt told the military to identify the men.

After some confusion, the Marines identified the men as John Bradley, Rene Gagnon, Ira Hayes, Harlon Block, Michael Strank and Franklin Sousley. All were Marines except Bradley, who was a Navy corpsman.

The identification of the six servicemen has been accepted for decades until three historians, Stephen Foley, Dustin Spence, and Brent Westemeyer began raising doubts about the identity of one of the men.

In 2016, the man identified as Bradley was actually Harold Henry Schultz, a private first class from Detroit who died in 1995.

Now three years later, the Marine Corps have revealed that a second man was not Rene Gagnon, but Harold Keller.

The historians managed to come to the conclusion after looking at film footage from atop Mount Suribachi and by reviewing further photographs taken by other soldiers who were there.

He had never revealed his presence in the inspiring photo to his family. 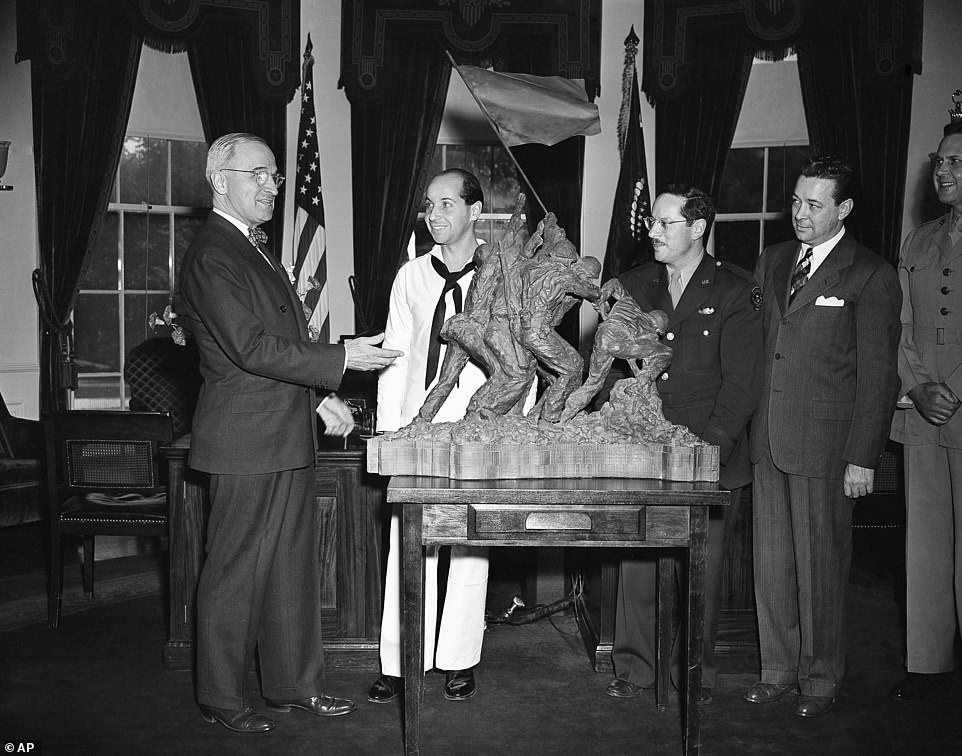 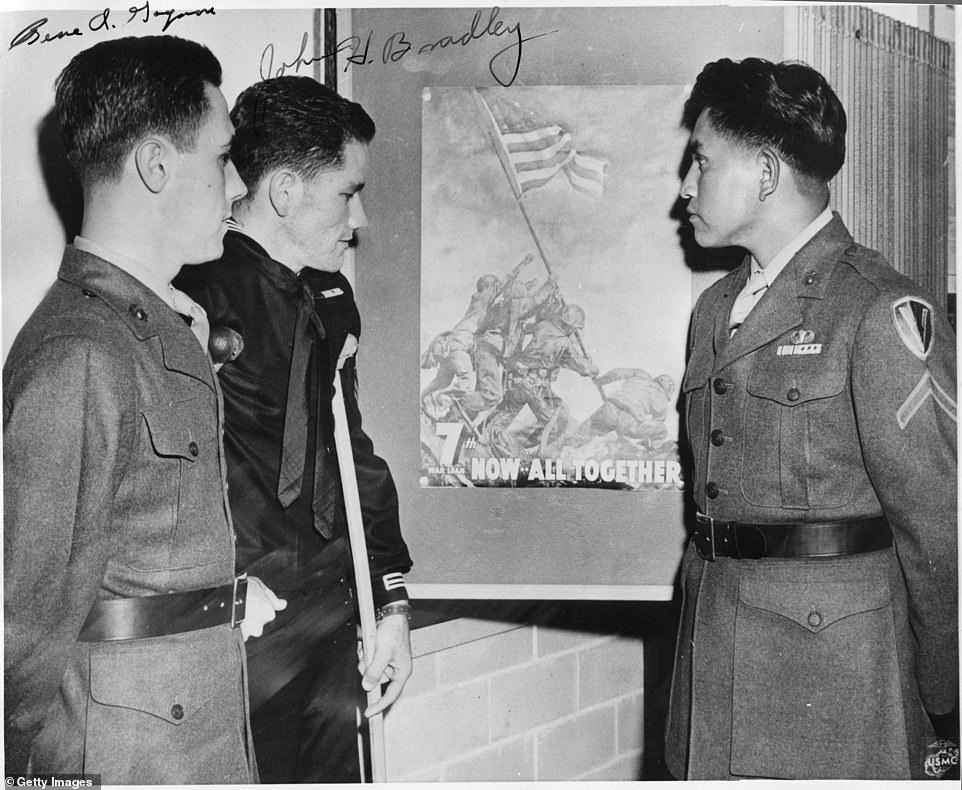 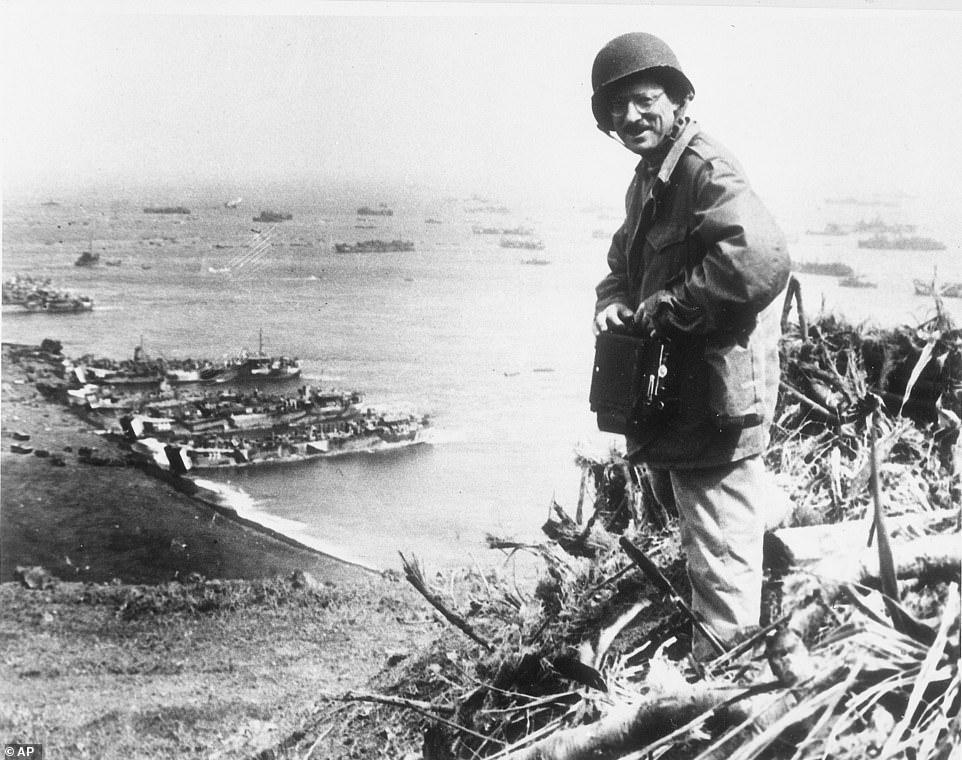 In this March 1945 photo, Joe Rosenthal, who took the iconic Iwo Jima flag-raising photo is is shown with his camera equipment looking over the Japanese volcanic island during World War II 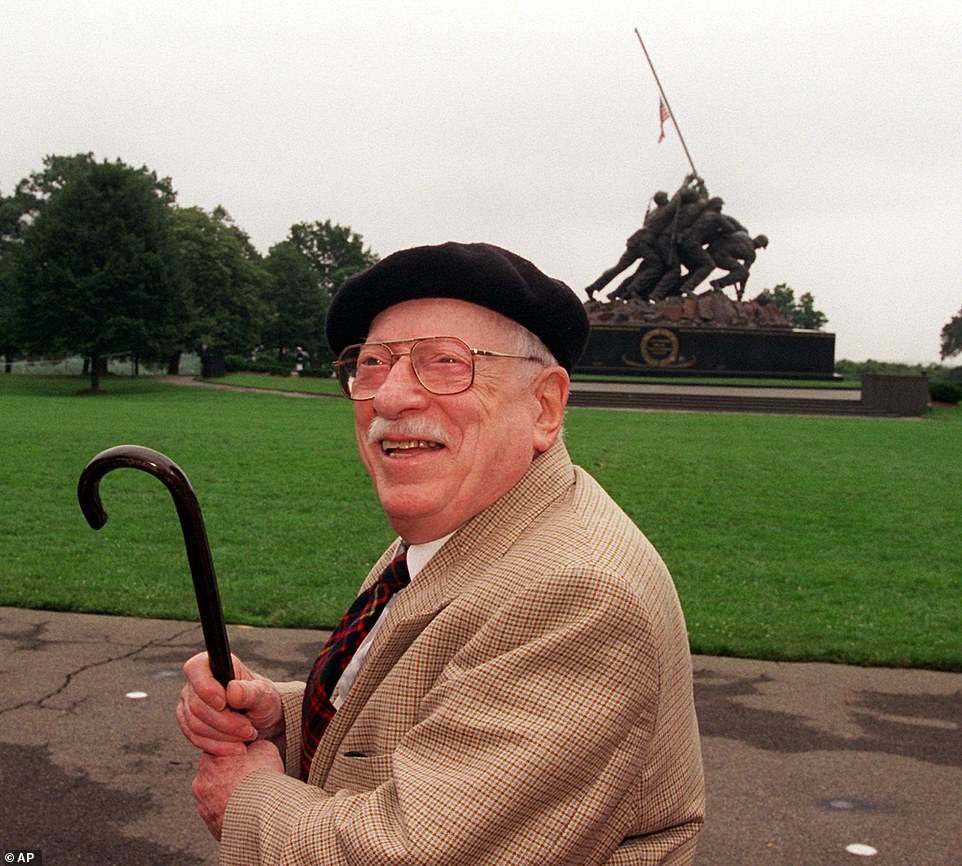 ‘We knew he fought in the war, we knew he was wounded in the shoulder at one point … But he didn’t tell us he helped raise the flag on Mount Suribachi,’ Keller’s shocked daughter, Kay Maurer, 70, told NBC. ‘He never spoke about any of this when we were growing up.’

‘Without the initiative and contributions of both private historians devoted to preservation of our history and the FBI’s Digital Evidence Laboratory, the Marine Corps would not have this opportunity to expand on the historical record of the second flag raising on Mount Suribachi,’ the Marine Corps told NBC News.

‘Regardless of who was in the photograph, each and every Marine who set foot on Iwo Jima, or supported the effort from the sea and air around the island is, and always will be, a part of our Corps’ cherished history,’ the Marines’ statement continued.

There were also two Jima flag-raisings on February 23, 1945, to signal that one of the bloodiest battles of World War II was won.

The first flag was deemed too small by military chiefs and replaced hours later after a second larger flag was found which was featured in Rosenthal’s prize-wining picture. 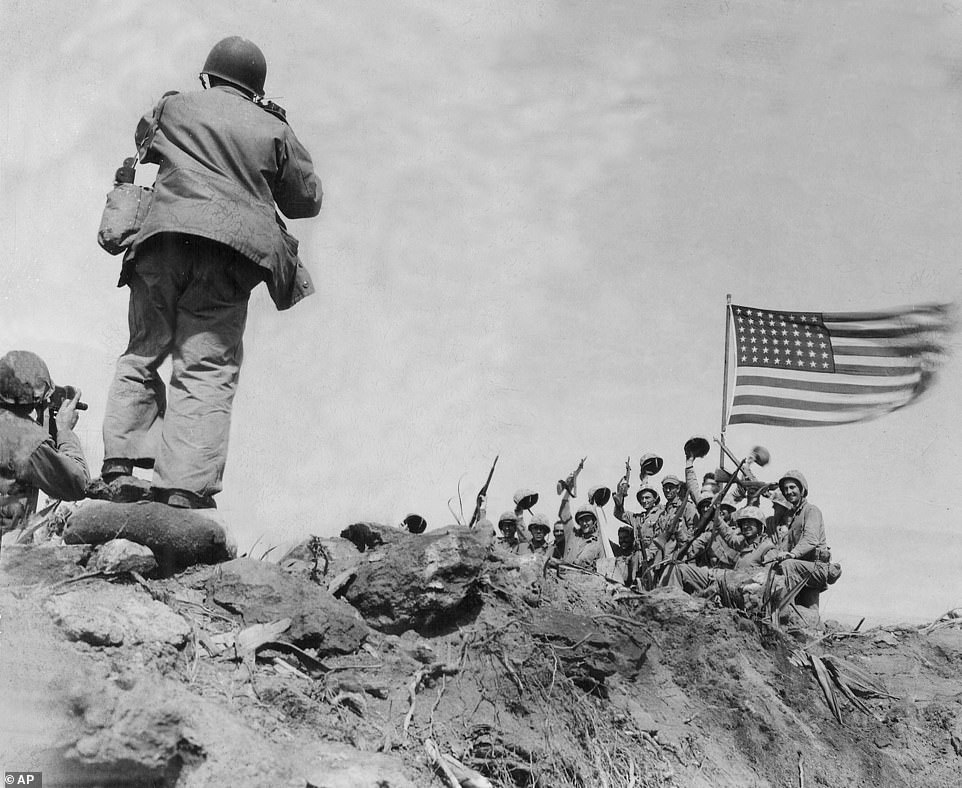 Another of Joe Rosenthal’s photographs while on Iwo Jima. Historians poured over old pictures and video to establish exactly who the six men who raised the flag were 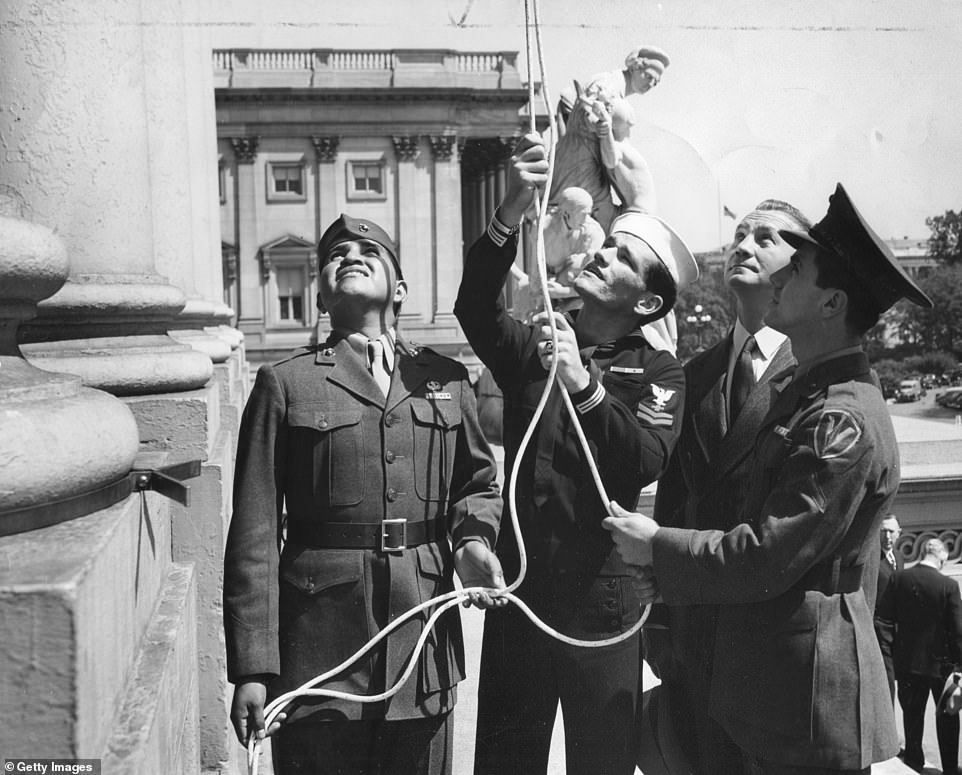 From left, Marine Private Ira Hayes, Pharmacist Mate 2nd Class John H Bradley, US Secretary of the Navy James V Forrestal, and Marine Private Rene Gagnon, hoist a flag at the US Capitol. The marines had been present at the histori Iwo Jima flag-raising on Iwo Jima. Here, they hoist that same flag in May 1945 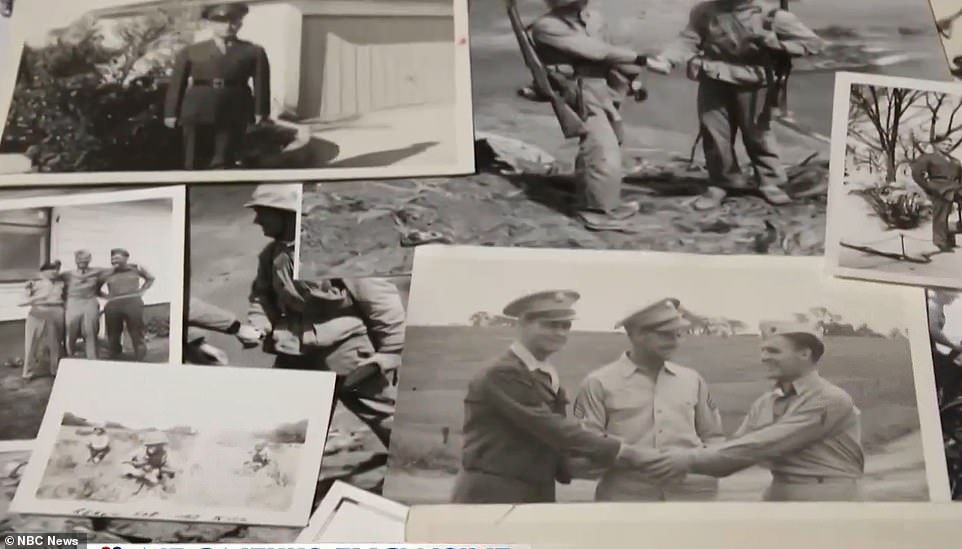 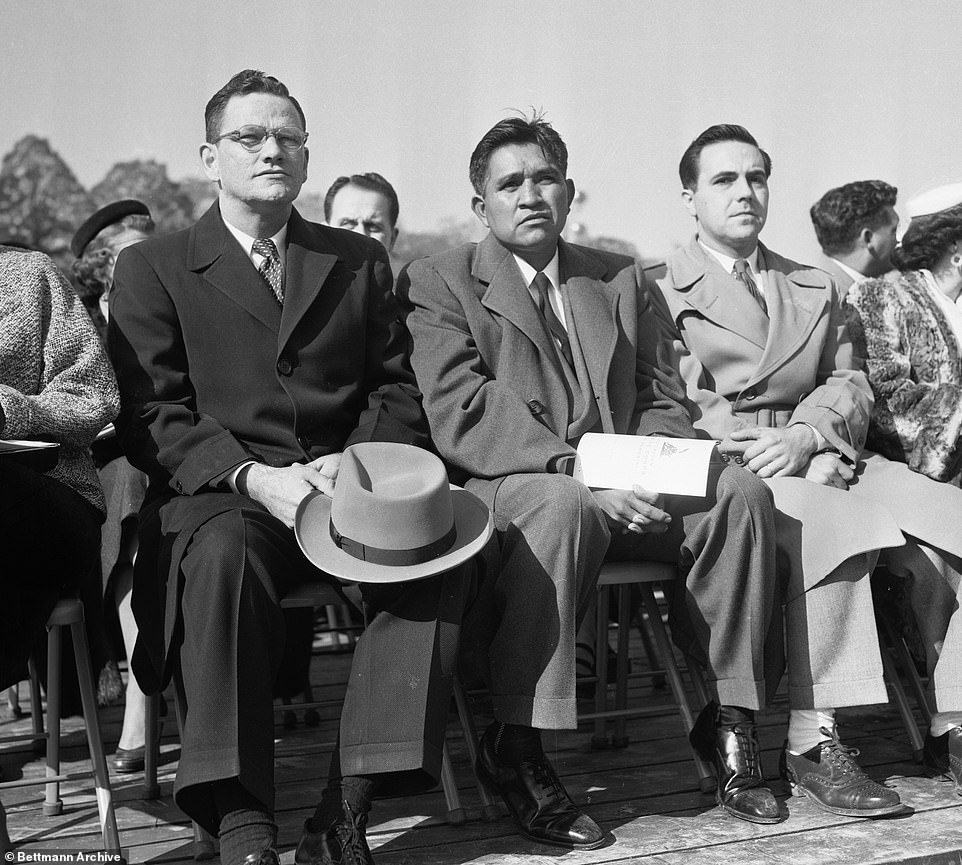 John H. Bradley, left, Ira Hayes, middle and Rene Gagnon,right, are pictured at a memorial service after the war. Bradley and Gagnon were both thought to have been in the historical Iwo Jima photograph, but that has now proven to be false 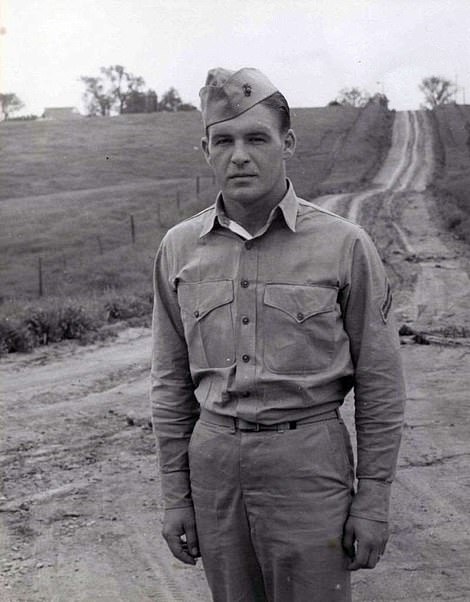 It appears that it was Corporal Harold ‘Pie’ Keller who was among the six men featured in the iconic photo, although he never mentioned it to his children long after the war was over

‘Private First Class Gagnon played a significant role in the flag raising on Mount Suribachi and his role will never be diminished,’ the Marines said in a statement.

‘He was directly responsible for getting the larger second flag to the top and returning the first flag for safe keeping. Without his efforts, this historical event might not have been captured, let alone even occurred.’

Maurer said historian Westemeyer had long believed that Gagnon was not one of the six flag raisers pictured. ‘The first time he thought it might be my dad was because of his stature,’ she said to NBC.

Westemeyer immersed himself in footage shot at the summit by Sgt. Bill Genaust, a Marine cameraman who was killed in action a week later.

‘After watching Genaust’s footage a thousand times over, I was a 100 percent certain Gagnon was not in the number two position,’ Westemeyer said.

It proved hard to identify because the man in the number two position from left to right was the most obscured.

He shared his findings with Foley and Spence who compared stills from Genaust’s footage with photographs of the scene taken from different vantage points by other photographers. 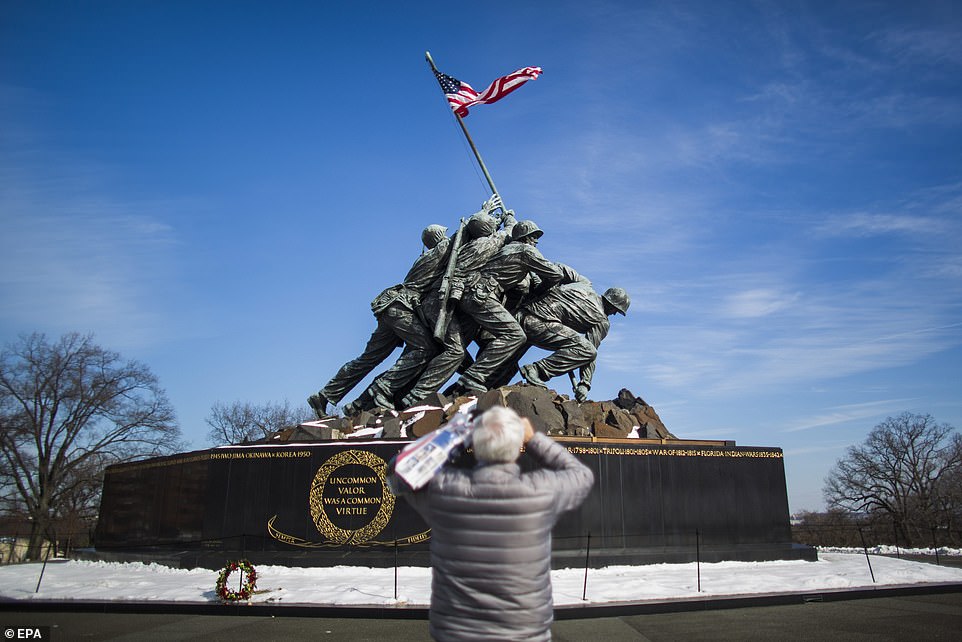 A man stands in front of the United States Marine Corps War Memorial, often referred to as the Iwo Jima Memorial in Virginia

Foley came across a photo in 2017 which showed two men saluting as the six men were raising the flag.

A closer look at Rosenthal’s original photo also revealed a ‘reflection of a ring’ on the left hand of the man in the second position.

Keller was married, while Gagnon wasn’t.

Finally, another photo showed Gagnon with a mole on his face visible as he reached for the first flag, while Keller and the others are seen raising the second flag on the summit.

After the war was over, Keller wanted to put the war behind him and returned to his job as a telephone lineman and raised his two sons and his daughter.

Some habits that her father picked up while fighting abroad stayed with him.

‘When he ate, he would always leave a little food on his plate,’ Maurer said. ‘We were always told to clean our plates but he never did. Finally I asked him why and he said: ‘When I was in the war, we weren’t always sure when we would get our rations. So I would save a bit. I can’t break that habit now.’ 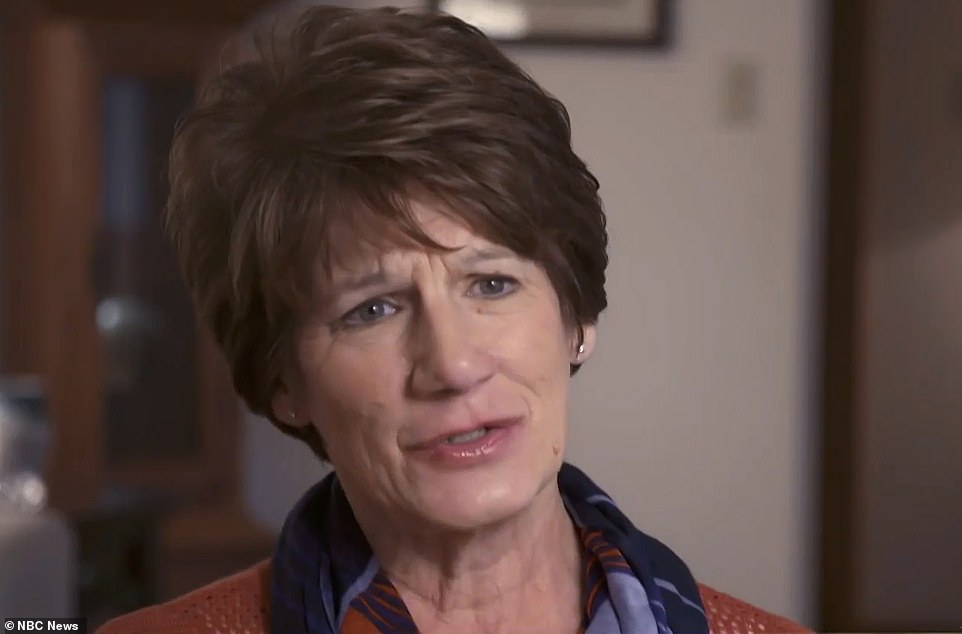 Corporal Harold Keller’s daughter,Kay Maurer, said her father never mentioned anything about him raising the flag at Iwo Jima

‘BURNED INTO THE NATIONAL PSYCHE’: THE BATTLE OF IWO JIMA 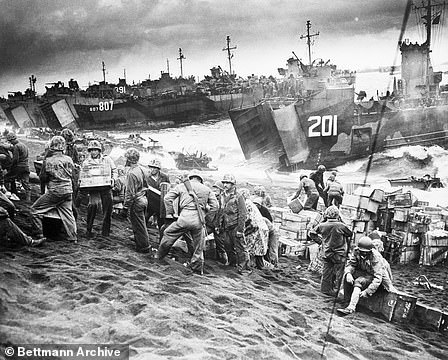 The tiny Pacific island of Iwo Jima was seen as key to the United States because it had three airfields that could be used to launch raids on Tokyo and Japan’s main islands.

Virtually all of the 22,000 Japanese soldiers tasked with defending the rugged, volcanic crag were killed in the battle.

The site became a symbol and rallying point for the United States in the Pacific war after the country’s flag was raised on its highest ground, Mount Suribachi.

Dozens of remains are recovered every year, but about 12,000 Japanese are still classified as missing in action and presumed killed on the island, along with 218 Americans.

Fighting began on February 19, 1945, but Iwo Jima was not declared secured until March 26.

Japan surrendered in August of that year, after the atomic bombings of Hiroshima and Nagasaki.

‘Iwo Jima is a unique place in the history of the United States,’ said Marine Corps commandant Gen. James Conway, speaking in 2010.

‘But Iwo is burned into our national psyche in a way that no other battle in U.S. is.’

SAVED by the Bell star Dustin Diamond's pal revealed he was diagnosed with cancer after realizing he had a “huge...