It wasn’t the content of Marion Marechal’s speech that drew a flock of French journalists to the uncomfortable wooden benches of the Oxford Union on Tuesday night.

For the most part, Marechal relayed familiar anti-immigration, "identitarian" far-right talking points: the theory that nations can’t survive unless they’re made up of people who all look and act the same.

No, confided Le Parisien’s man on the ground. The media were here because this 29 year-old, charismatic, thoughtfully-spoken extremist could well be the woman most likely to challenge Emmanuel Macron in the 2022 presidential election. 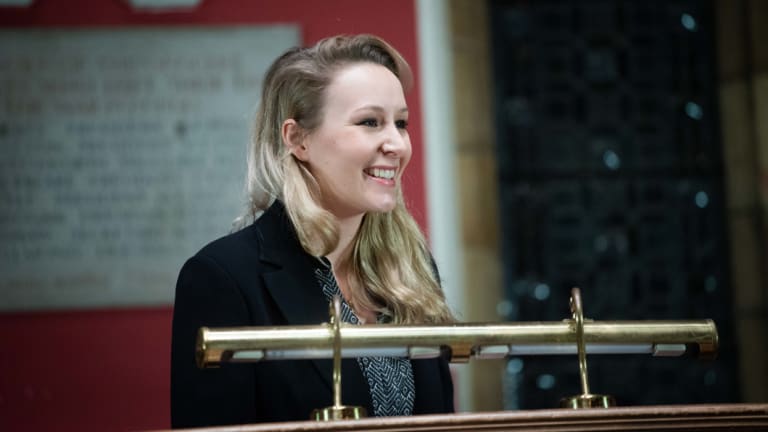 Marion Marechal, who spoke at Oxford Union on Tuesday, is now the director of a school of political science in Lyon.

Marechal – granddaughter of National Front founder Jean-Marie Le Pen and niece of FN leader Marine Le Pen – became France’s youngest MP in modern political history in 2012, aged just 22, but quit in 2017 and is now the director of a school of political science in Lyon.

She claimed she had left politics.

To quote L’Express, “few pretend to believe it”.

Or, to quote Le Figaro, she is “in denial” over her obvious desire to re-enter politics, or at least public debate.

Marechal told Figaro the Oxford Union event “allows me to speak on politics without re-entering the national debate – it is at the same time visible and comfortable”. 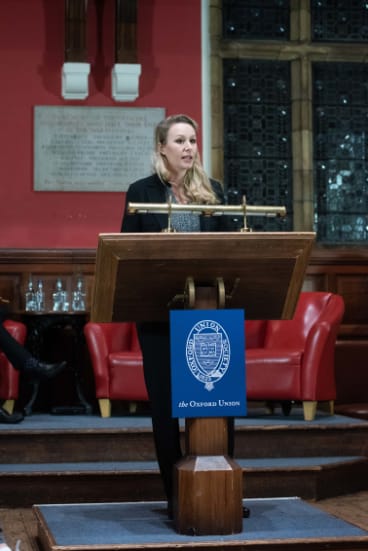 An ally told Figaro Marechal was chomping at the bit to get back into politics.

She claimed to be following the theory that before she hoped to win on a political and electoral level, she first “had to win on the cultural level”.

However, an ally told Figaro she was chomping at the bit to get back into politics.

And Marechal’s speech to the 196-year-old debating society audience was political from beginning to end.

She said France’s "gilets jaunes" protesters were “very similar to your Brexiters”.

“We are in the midst of a populist movement,” she said.

Populism had been given a negative connotation by left-wing people, but it was ideologically democratic, Marechal said.

“Behind the word populist, there is the word ‘people’,” she said. “People who have been abandoned, who are not represented.”

The working class were being “utterly ignored by the elite”, she said. “There is a crisis of representative democracy.”

The elites, she said, were a group of people who went to the same schools, had the same views on immigration, multiculturalism and the economy, and went on to make all the big decisions for France.

Marechal said they were out of touch with the French people’s views on immigration, and the integration of immigrants into French society.

She attacked Macron, accusing him of being subservient to Germany.

She also attacked the European Union, though she acknowledged France would find it hard to leave because of its integration into the euro currency.

“We have to train a new elite,” she said. “And that elite must reconnect with the people.”

Marechal’s new Institute of Social Economic and Political Sciences (ISSEP) in Lyon has been dubbed the "far-right finishing school".

It was launched last May with a brochure promising to train a “new generation of decision makers”.

Classes include “the art of disinformation”, “Islam and Islamic civilisation: analysis of a new global trend” and “conservatism in the USA, China and Russia”.

“It is a place for meeting all the right-wing families,” one student told Politico. “On the right side of the political spectrum we lack youth with an ideology.” 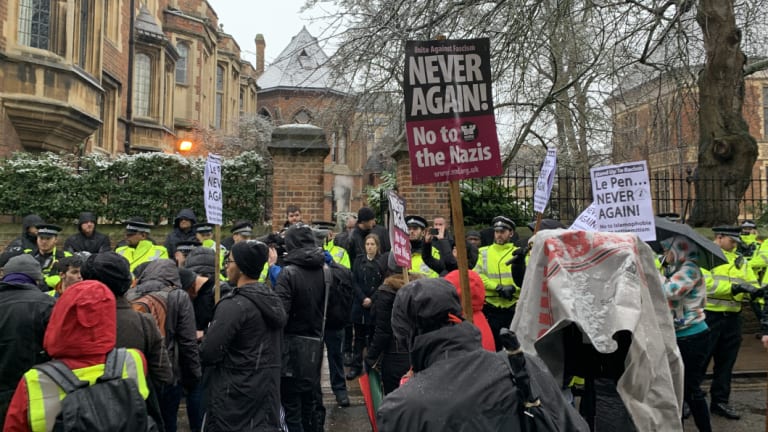 Protesters rally at Oxford Union ahead of Marechal’s talk.Credit:Nick Miller

But a French language radio station described the school as “50 shades of extreme right”.

One of the college’s advisory board members is Raheem Kassam, of the self-styled ‘bad boys of Brexit’, UKIP advisor, former Breitbart editor and close ally of former Donald Trump strategist Steve Bannon.

Bannon – who spoke at the Oxford Union last year – has been active in Europe in the last year promoting a Brussels-based foundation called the Movement, aiming to coordinate and advise right-wing populist parties for this year’s European Union elections and beyond.

Marechal’s school is more than a little reminiscent of Bannon’s proposed “Academy for the Judeo-Christian West”, which he is bankrolling to set up in a former monastery in an Italian village east of Rome.

Bannon said the academy would “teach the underpinnings of populism and nationalism” as well as “a broader range of stuff. The trends of where we think the world is going”.

Le Parisien commented, at the end of its write-up of the Oxford speech, that “certainly, the 400m2 of the ISSEP seems very narrow for the ambition of Marion Marechal”.

BBC News reported that Marechal's talk sparked a protest outside the event. About 50 protesters took part ahead of the 5pm talk, it was reported. The Oxford Union said it respected the "right to peaceful protest", the BBC reported.

Marechal has dropped the Le Pen she formerly had in her surname, and has pledged not to interfere in her aunt’s campaign in the European Parliament elections.

But though Le Pen still commands the loyalty of Front National (now renamed National Rally) supporters, a poll in June last year found more right-wing voters were in favour of a Marechal presidential campaign in 2022 than for Le Pen.

Among all French voters, 34% were in favour of Marechal compared with 17% for Le Pen as the best candidate for FN.

“I am no longer a politician,” Marechal told the Oxford Union audience, during the Q&A at the end.