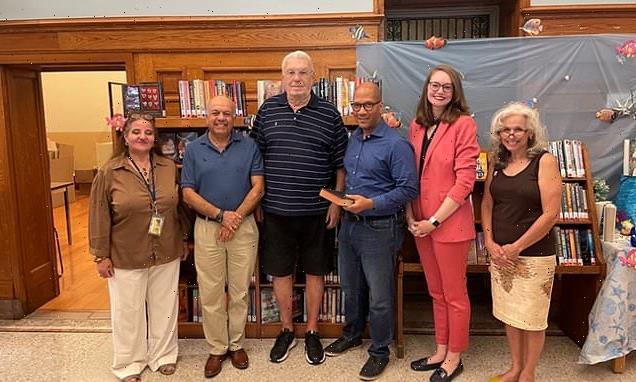 A fairtytale ending! Man, 89, who checked out a book entitled ‘Hitler’ in 1947 when he was just 14 finally returns it in mint condition with the original reference card inside (and he didn’t have to pay a fine)

An 89-year-old man who checked out a book as a schoolboy in 1947 has finally returned it to the library – in mint condition.

Bob Jablonski, who grew up in Jersey City, told the Hudson Reporter that he found ‘Hitler’ – a novel by Oden Rudolph warning the world against Nazi dictator Adolf Hitler – while clearing out his family home.

Wanting desperately to return it, Jablonski – who will turn 90 in April – contacted the James J. Ferris High School Branch about getting it back to the library. 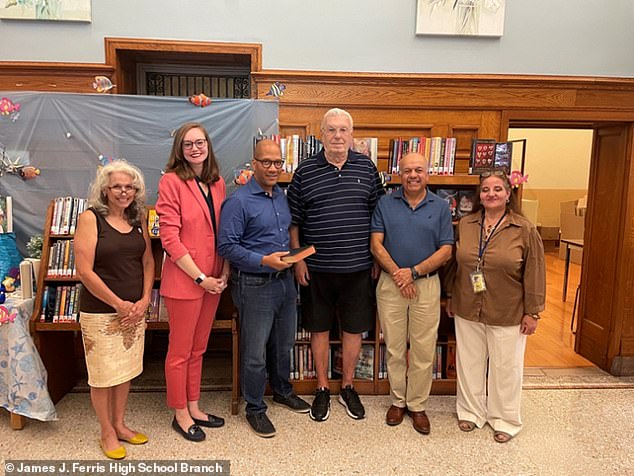 An 89-year-old man who checked out a book as a schoolboy in 1947 has finally returned it to the library – in mint condition. Bob Jablonski (pictured third from right) told the Hudson Reporter that he found ‘Hitler’ by Oden Rudolph while clearing out his family home

Staff at the library were eager to see the book’s condition and learn about the memories Jablonski had of the library from his time as a schoolboy in the 1940s.

While he could not recall the exact details, 75 years after he first checked the book out as a 14-year-old, Jablonski returned it to his old school. The book was in perfect condition, and even had the original reference card inside, the Reporter said.

When he checked the book out, America and the world was a very different place.

Harry Truman was president, the Second World War had just ended and the United States was gearing up for the beginning of the Golden Age of Capitalism. The 19th Academy Awards saw ‘The Best Years of Our Lives’ take home the best motion picture award and ‘Near You’ by Francis Craig topped Billboard’s top-singles chart.

Across the pond that year, England’s Princess Elizabeth announced her engagement to Lt. Philip Mountbatten. It was also the first year of the Cold War.

A photograph of the reunion showed Jablonski posing with librarians and directors who work at the library today. Terry Hill, one of the library’s directors, appeared to be holding the book bound in a black cover.

The Library’s board of trustees voted to get rid of fines in March 2021 in order to reduce barriers to people wanting to borrow books and to make them more accessible for everyone.

The vote made the library the largest fine-and fee-free institution in New Jersey. 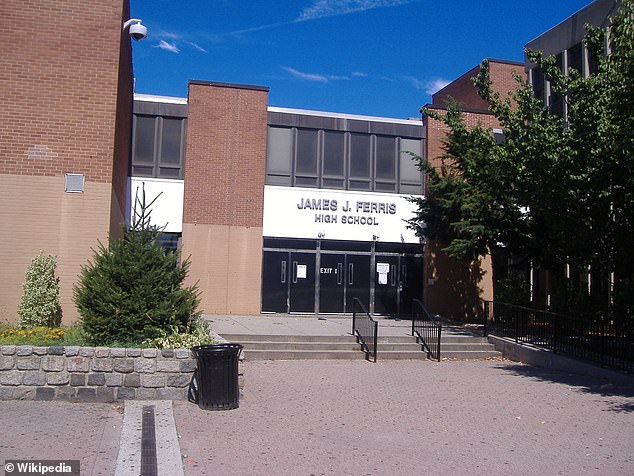 The book was returned to the James J. Ferris High School Branch library, after it was first taken out in 1947. Pictured: The high school is seen in this photograph

‘The Jersey City Free Public Library decided to go fine free when we realized we were losing patrons who might have owed money for books they lost years ago,’ Assistant Director Kate Davis told the Hudson Reporter.

‘We want patrons in the library, and we do not want fines to discourage anyone from coming back to visit us.’

Davis urged anyone who might be in a similar situation to Jablonski to not be deterred to return books to the Library.

‘If anyone finds themselves in a similar situation to Mr. Jablonski, do not worry about owing thousands of dollars in fines – even after 70 years, Mr. Jablonski returned the book without owing anything, and so can you,’ she said.

When announcing the change last year library director Jeffrey Trzeciak said ‘The burdens of the fines placed on our patrons are significant, and we recognize overdue fines are a form of social inequity, which creates barriers to accessing library services, often for those who need it most.’

Other libraries, including the New York Public Library in New York City, have also removed their late fees for similar reasons.

Earlier this month, the Winnipeg Public Library said a copy of Baseball by Daniel E. Jessee was recently returned to its drop box. The book had been due back on June 18, 1974 – meaning it was 48 years late.