The moment a man eats the world’s hottest food fire-paan… and barely bats an eye-lid!

A customer has been filmed eating the world’s hottest food at a street market in Delhi.

In the amazing clip, a chef holds the fire-paan street food snack on his hand and grinds pepper over the top.

The savoury dish consists of betel leaves, areca nut and a cocktail of spices – including cloves, betel nuts and cardamom which are stuffed inside, as well as chutney. 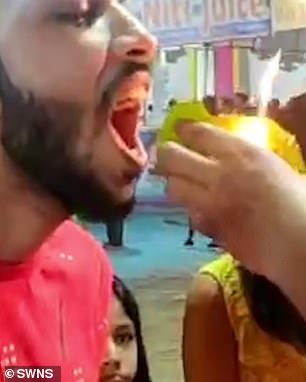 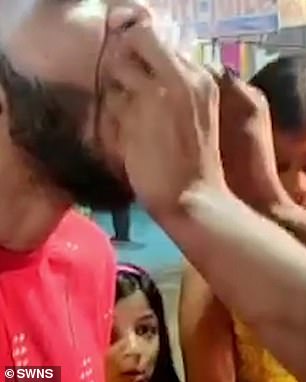 A man was fed the novelty fire-paab Indian street-food snack at a market in Delhi. This dish consists of betel leaves, areca nut, dried fruit and a cocktail of spices – including cloves, betel nuts and cardamom

Holiday-makers who brave the burning dish can choose whether they spit the herbs out of this novelty snack.

And as demonstrated in this mind-blowing clip, the cook wraps up the betel, which contains the luminous flickering flame, and thrusts it into the mouth of the customer.

A little girl nearby screams ‘mumma’ as she watches the flaming food being propelled into his mouth and anticipates the result. 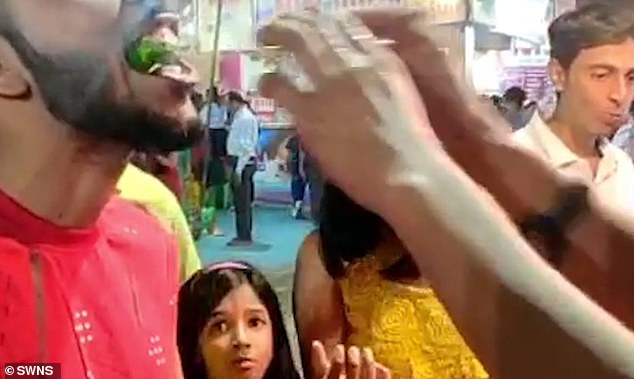 Fire-paan has been historically enjoyed for centuries as a mouth freshener after a heavy meal. The betel leaves can cure a variety of illness symptoms including coughs, colds and headaches

Meanwhile others appear to opt for vine leaves and nibble at the offerings, seemingly unphased by the blazing spectacle.

As the historic dish is shoved into the man’s mouth, the flames are immediately extinguished.

Smoke blows from his mouth and he uses his hands to scoop up the leaves around the edge of his lips – and does not even bat an eye-lid.

Fire-paan has been historically enjoyed for centuries as a mouth freshener after a heavy meal. The betel leaves can cure a variety of illness symptoms including coughs, colds and headaches according to Ayurvedic medicine.

It was even introduced after someone complained about having a mouth ulser and the betel leaf snack instantly cured it.

This delicacy has seen modern interpretations including the Chocolate Paan and Ice-Paan.

But it has not always had popularity as India’s Prime Minister Narendra Modi has spoken about how this is impacting the cleanliness.

The Varanasi Municipal Corporation (VMC) said it was going to introduce Rs 500 fines for paan chewers spitting in the open and Rs 100 for littering with the leaves.