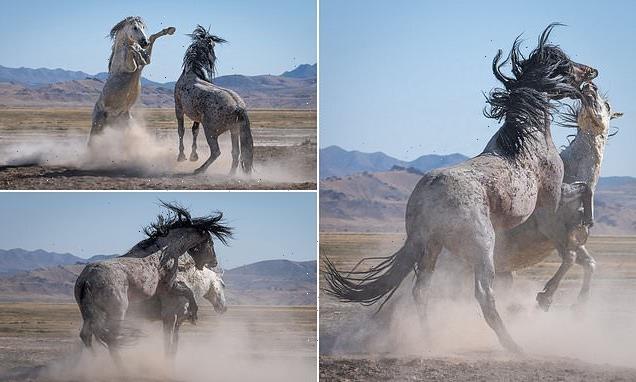 Quit foaling around! Majestic stallion picks a fight with rival in battle of strength but ends up losing… and being left with a bruised ego

Incredible pictures show two stallions fighting in a test of strength at a horse sanctuary, with their manes going wild as they duel.

The series of images, taken at the Onaqui Wild Horse Sanctuary, Utah, capture a pair of stallions in the midst of battle.

The two horses, a grey and a brown stallion, kick up dirt as they fought for dominance amid an arid landscape.

The brown stallion ended up winning the contest, though neither of the horses were hurt after.

Susan Goudge, a retired teacher who now specializes in horse photography, was lucky enough to witness the stallions during their tussle.

She said: ‘I love to watch horses as they are such free animals. Their behavior is always so interesting, and they love to pick a good fight.’ 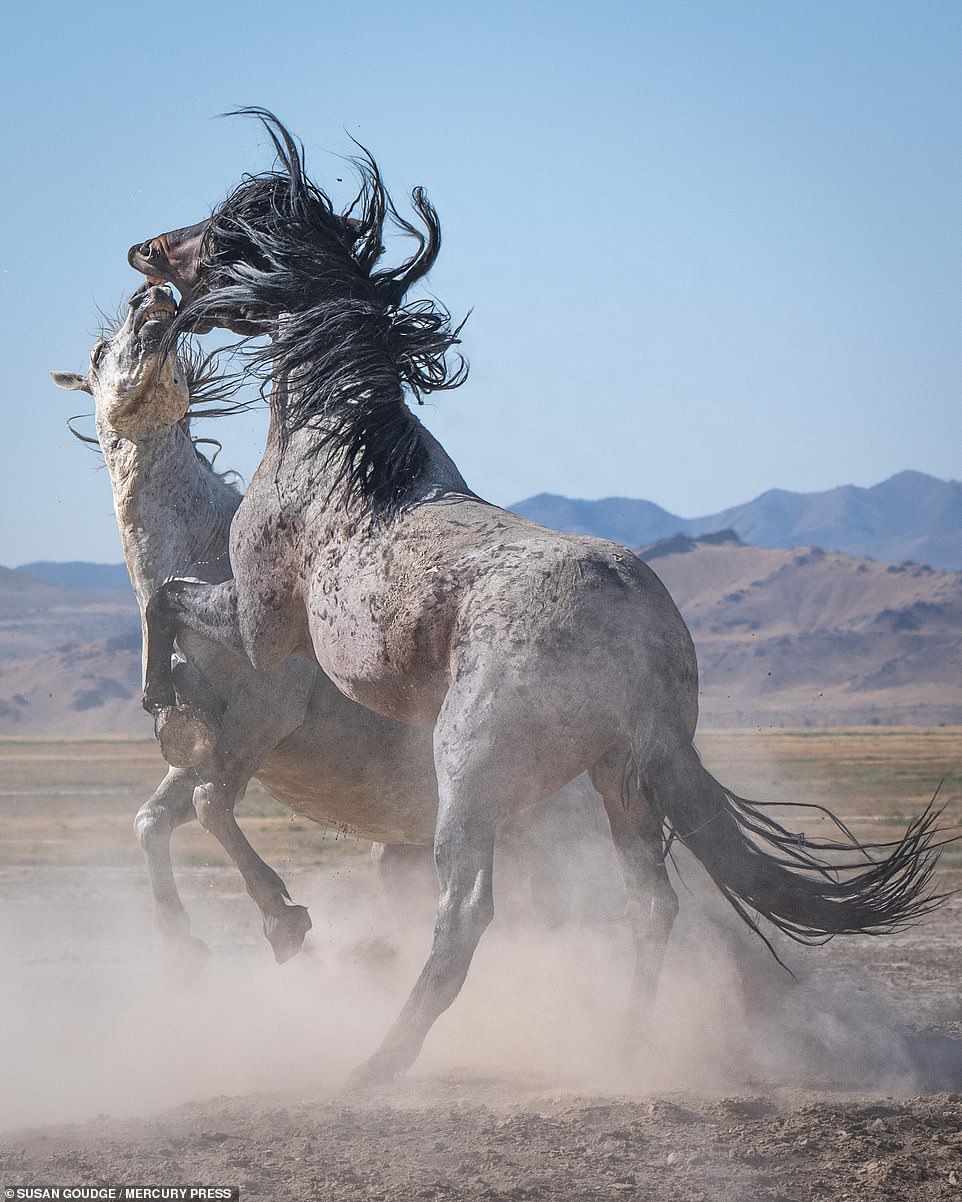 This series of incredible images, taken at the Onaqui Wild Horse Sanctuary, Utah, US, capture a pair of stallions in the midst of battle, to decipher who’s the strongest 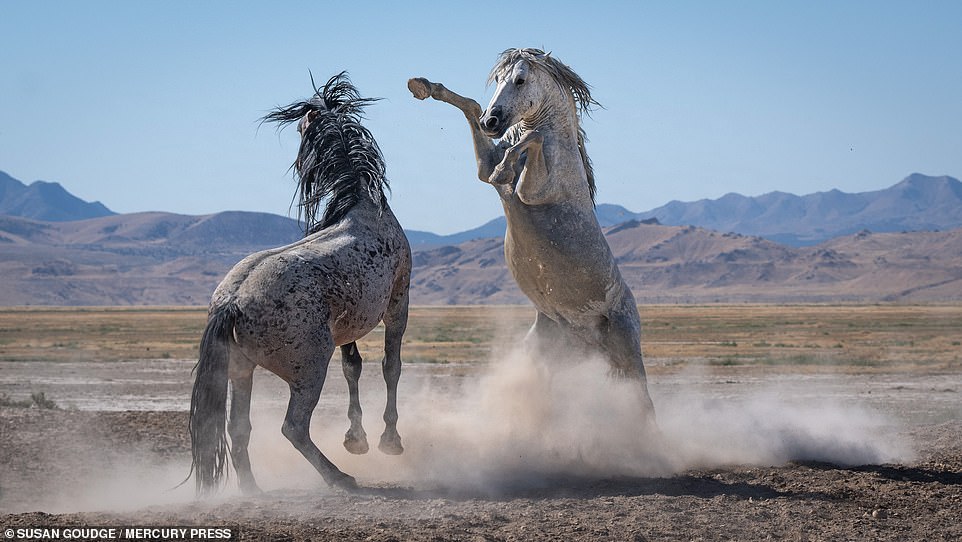 The picture shows the two stallions fighting in a test of strength at a horse sanctuary, with their manes going wild as they duel. Early settlers and the cavalry brought wild horses to the area in the late 1800s

She went on: ‘Maverick, the grey stallion, was trying to pick fights with everyone and was being overly aggressive.

‘The dust being kicked up around them was amazing and created a really cool effect, as did the way their hair swished in the wind.

‘The other horse, whose name I do not know, ended up winning though and seemed to be very smug about it.

‘Neither horse seemed injured at the end, just very worn out with sore egos!’

The sanctuary is a nonprofit group dedicated to saving the wild horses of Utah’s Onaqui Herd Management Area.

The sanctuary works with the Bureau of Land Management in Utah to rehabilitate wild horses so they can be re-released back into their natural habitat. 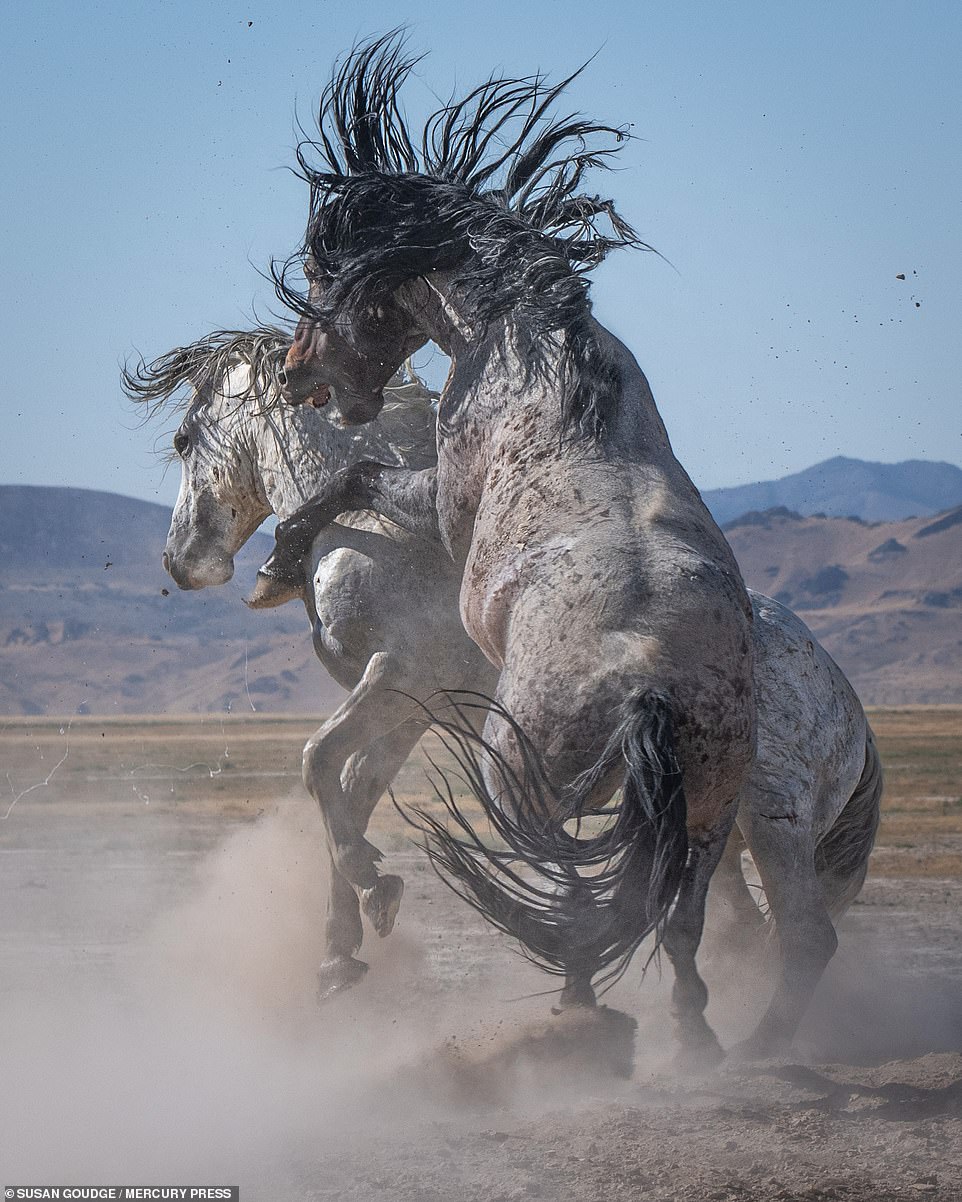 The two horses, a white and a brown stallion, kick up dirt as they fight for dominance amid an arid landscape. The Bureau of Land Management gathers horses together to increase the genetic diversity of the herd before releasing them into the wild 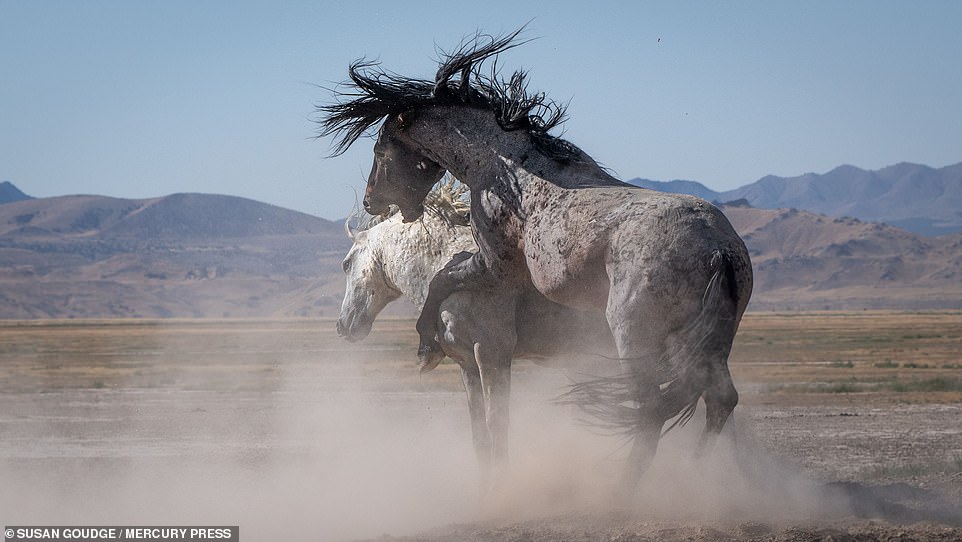 Neither of the horses seemed injured after the fight, the photographer said. They brown stallion ended up winning the contest between the two

Early settlers and the cavalry brought wild horses to the area in the late 1800s. Wild horses are usually gregarious and have few natural predators other than the occasional to mountain lions.

Mares and stallions within the Onaqui Mountain Herd Management Area (HMA) have a slight to moderate build and average around 800 to 1000 pounds.

The dominant colors within the herd area are brown and bay. In the early 1990s, the Bureau of Land Management introduced wild horses from the Rock Springs, Wyoming area which increased the colors to include: sorrel, roan, buckskin, black, palomino, and gray. Currently, pintos, grays, palominos, and roans have begun to increase in numbers.

After a Bureau of Land Management gathering in 2005, the herd was augmented with approximately 10 stallions and 10-15 mares from other HMAs of various origins.

This was done to help with genetic diversity, to increase size of the individuals and adoptability of the Onaqui Mountain HMA wild horses. Every 3-4 years since then, another 3-5 horses have been released.

These horses came from HMAs in Utah, Idaho, California, and Nevada.