Lord Alan Sugar has slammed ‘complacent’ Britons who are still working from home, despite Boris Johnson’s clarion call for employees to return to their desks.

The businessman, 73, said remote workers are ‘enjoying’ their time at home and should return to offices to ‘get back to some sort of normality’.

The Apprentice host said his ‘businesses have all come back’ and others should follow suit.

His comments come amid the Government’s desperate push to convince Britons to return to their desks amid fears of yet more high street businesses going bust due to the lack of footfall following the widespread introduction of working from home.

Speaking on This Morning alongside The Apprentice winner Carina Lepore, Lord Sugar said: ‘Those people who like working from home have become a bit complacent, I think, quite honestly. My businesses have all come back.’ 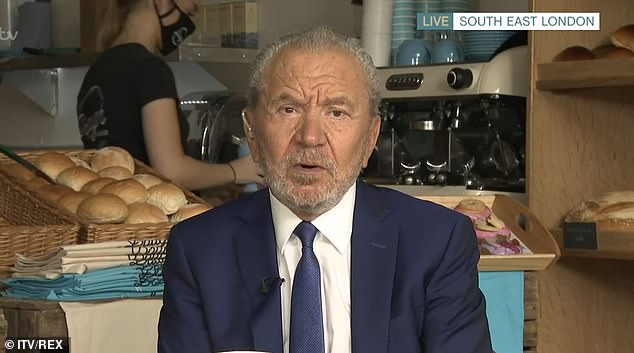 Lord Alan Sugar has slammed ‘complacent’ Britons who are still working from home, despite Boris Johnson ‘s clarion call for employees to return to their desks 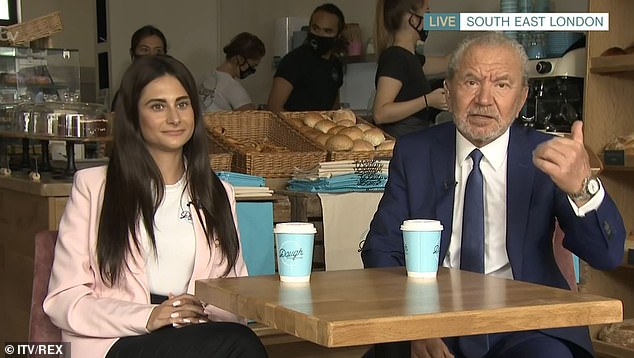 Addressing people who may be too scared to go back into office spaces, he said: ‘I think there’s a fine line of fearful and enjoying it, to be honest with you.

‘It’s as simple as that. What are they fearful of?’

He added: ‘I’ve got a factory down the road from here that has 300 people that have been working all throughout the pandemic. We have got proper processes in place.’

Mr Johnson and his Cabinet are increasingly concerned about the impact continued remote working is having on the UK economy amid fears for the future of struggling town and city centres.

Mr Johnson last week told his Cabinet that ‘people are going back to the office in huge numbers across our country and quite right too’.

The PM said that ‘bit by bit this incredible country is getting back on its feet and recovering from this crisis’.

But the government’s push to get Britons back to the office suffered another blow last week when a poll showed that three-quarters want to keep working from home. 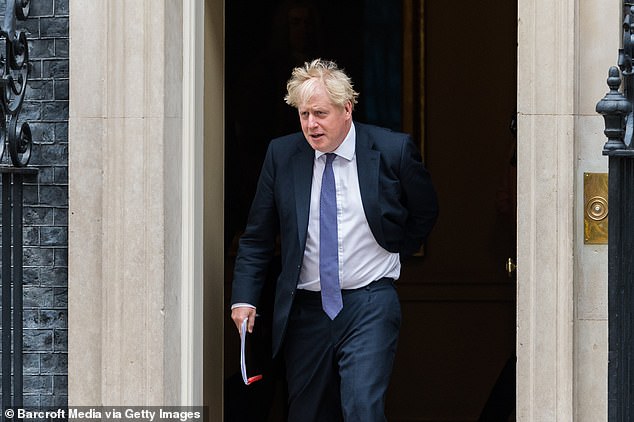 His comments come amid the Government’s desperate push to convince Britons to return to their desks. Pictured: Boris Johnson on Tuesday 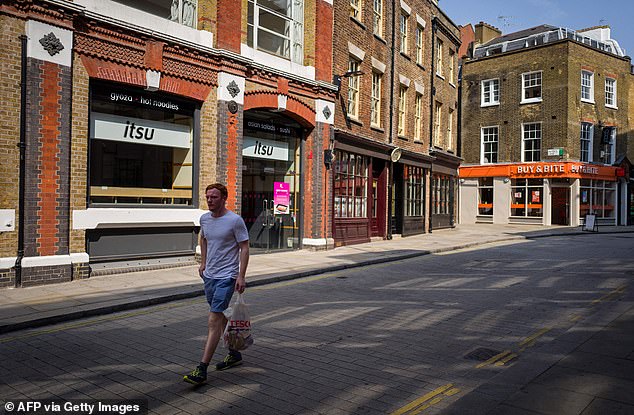 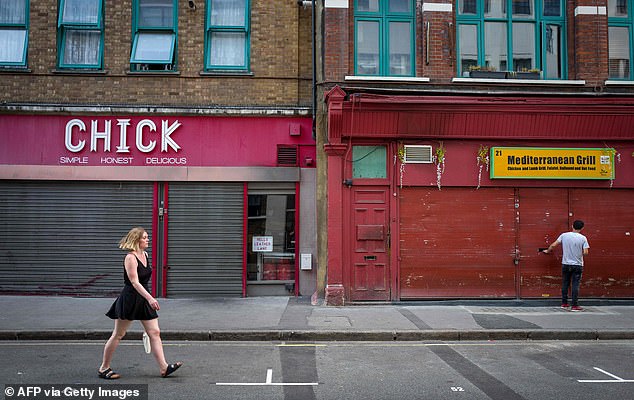 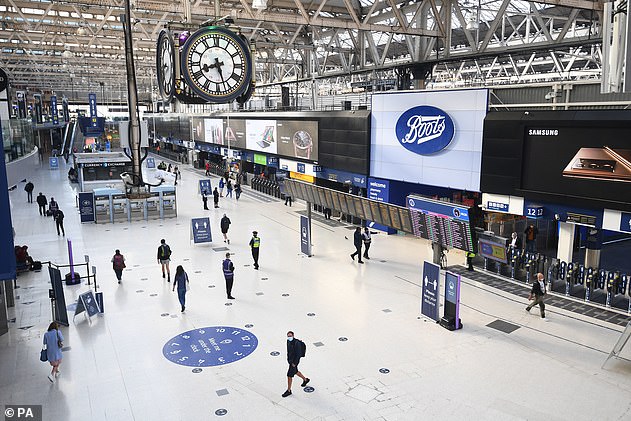 The concourse at London’s Waterloo station – which is one of the capital’s busiest – during the rush hour, September 2, 2020

Research by Redfield & Wilton Strategies for MailOnline found 74 per cent who had been doing their job at home during lockdown would prefer to continue to do so, at least some of the time.

There is also widespread distrust of the government’s claim that it is safe to return to offices, with 37 per cent saying they believe that is the case but 40 per cent saying it is not.

Lord Sugar – who has previously called for lockdown measures to be lifted – said he ‘sympathises’ with the government who have handed ‘an unprecedented situation’.

He said: ‘The second wave is something that has been discussed for a long time now. All I know is this, this government, who I sympathise with, can’t be seen to do anything right with anybody.’ 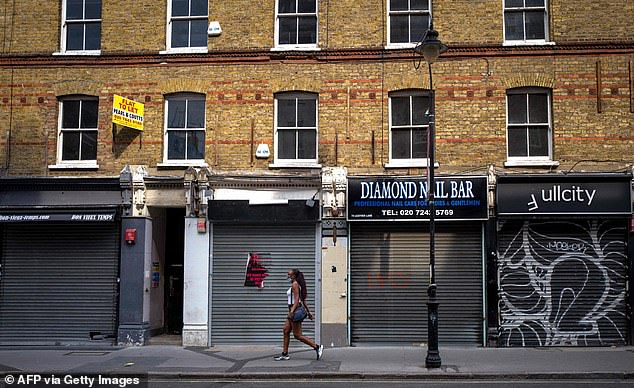 It comes amid fears of yet more high street businesses going bust due to the lack of footfall following the widespread introduction of working from home. Pictured: London last month 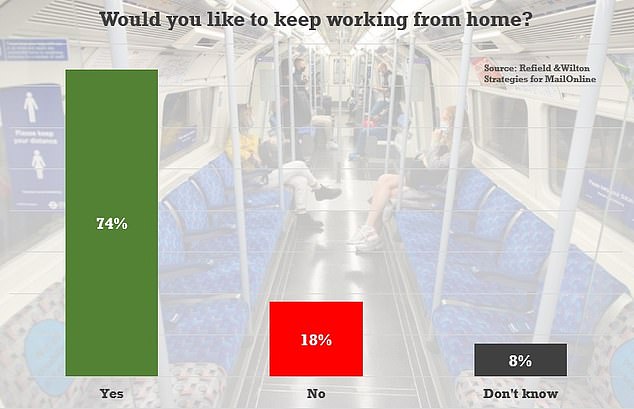 Research for MailOnline found 74 per cent who had been at home during lockdown would prefer to continue to do so, at least some of the time 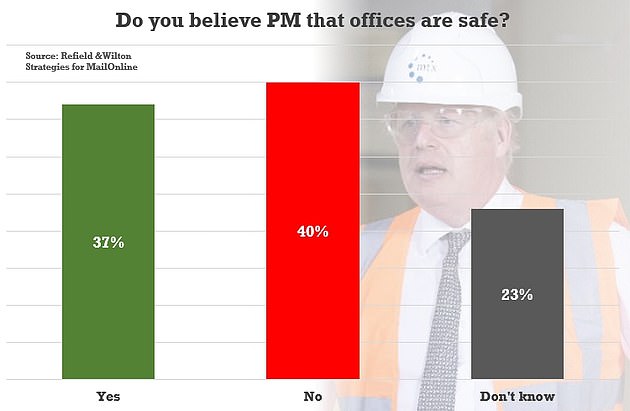 There is also widespread distrust of the government’s claim that it is safe to return to offices, with 37 per cent saying they believe that is the case but 40 per cent saying it is not

He added: ‘They’ve been given an unprecedented situation and we’re learning as we go along.

‘We have been told what to do… Let’s get on a bus, just don’t touch your face…’

‘If you go down Whitehall it’s like a ghost town and that’s because all of the Civil Servants, they only need half an excuse not to go to work, we’re paying for them by the way.

‘The banks are really annoying. They’re telling people not to come back to work until January.

‘They’re starting to use the pandemic for an excuse for making mass redundancies.’

He urged staff to ‘think about the young people’ who will benefit from an office environment.

He said: ‘The thing about getting back to work is this, when you’re in the workplace you don’t realise in the course of a day how many questions and answers that go on… You don’t realise the interaction that goes on. Think about the young people also.’

Lord Sugar was speaking live from Beckenham where he was opening his second bakery with Ms Lepore. 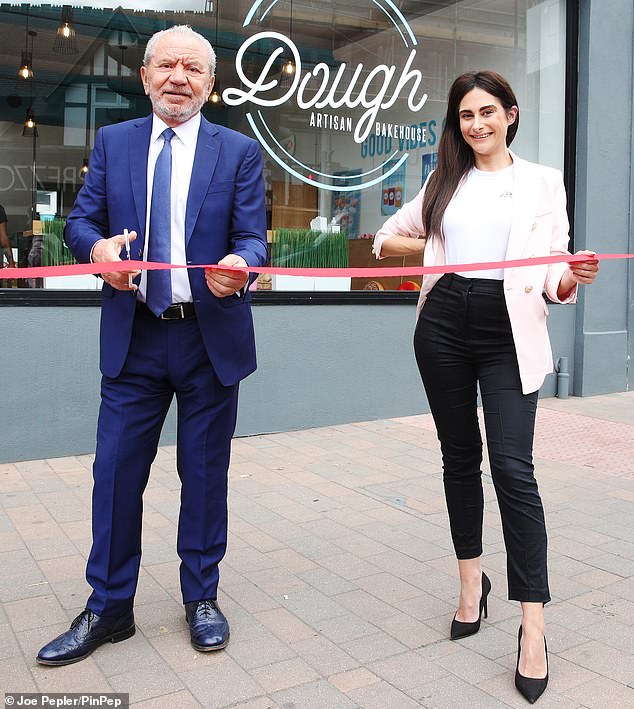 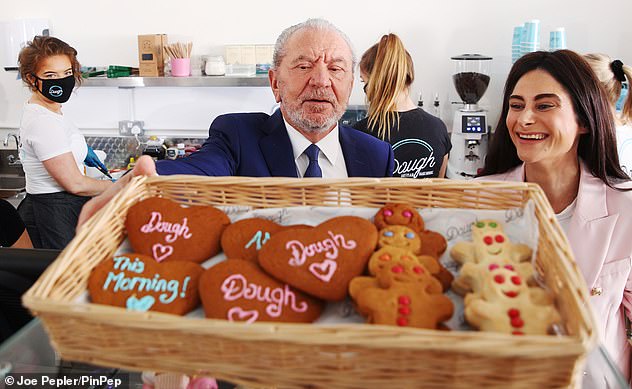 Store: The businessman joined the budding entrepreneur to throw open the doors of her second store which includes an in-house bakery and a cafe 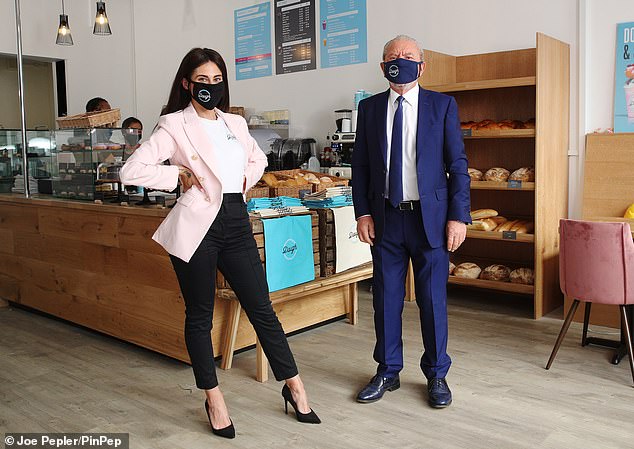 Dough Artisan Bakehouse is a family run bakery founded by Carina, who still manages the day-to-day running of the business

‘We have got to get back to some sort of normality.

‘We all know what to do, the right things to do, the social distancing, the masks, the washing the hands, we’ve put all that in place now and if people act sensibly we can get back to normality again.’

Lord Sugar spoke about the advice he gave to Carina during the pandemic: ‘What attracted me to Carina as a winner last year was that this business has potential.

‘I’ve always said: “It doesn’t matter what happens in any business climate, food will always be good”.

‘I think Carina will concur, even throughout the course of this pandemic, we started our Herne Hill shop [and it] has been banged out, really busy.

‘So, it’s given us the encouragement to open a second branch, which was always on the cards.

‘In fact, a lot of people thought to themselves: “What the hell are you investing in a small baker’s shop for?”

‘Because it’s not my idea, and certainly not her [Carina’s] idea, for it to be a small baker’s shop. Greggs watch out! We’re going to have a lot of branches.’

Guidance on working from home in England changed at the start of August.

Workers who were able to work from home were advised to do so during lockdown but they are now being encouraged to speak to their employers about returning to workplaces where it is safe to do so.