LIZ JONES: In the real world of my 52/48 voting Essex home town all (bar two!) want MPs to back Theresa May’s Brexit deal

If this were Paris, people would be setting fire to things. There would be violence. The French take to the streets when they don’t get what they want. We don’t.

I am indeed not in Paris but in Chelmsford, county town of Essex, a city that was split down the middle in the referendum: 52 per cent voted Leave, 48 per cent Remain.

And I’m in a bar called the Grand Central on Friday night with three mums who have spent the day not carrying banners or breaking windows, but instead are loaded down with stiff carrier bags of Christmas shopping: the labels shout John Lewis, The White Company, Topshop, Waterstones.

I tell them I grew up here, too, and would have died and gone to heaven if these stores had existed then, in the 1970s. Even this bar. They honk with laughter. 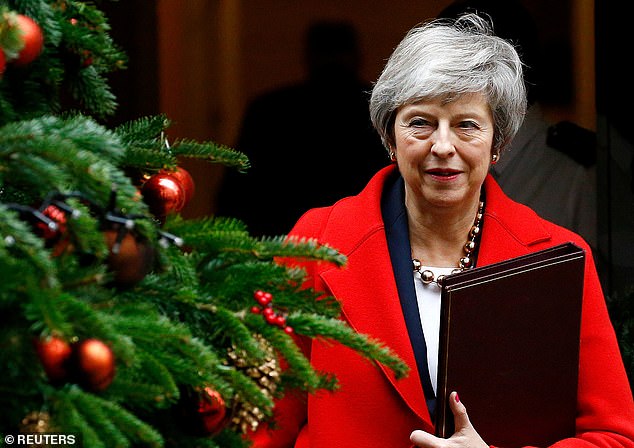 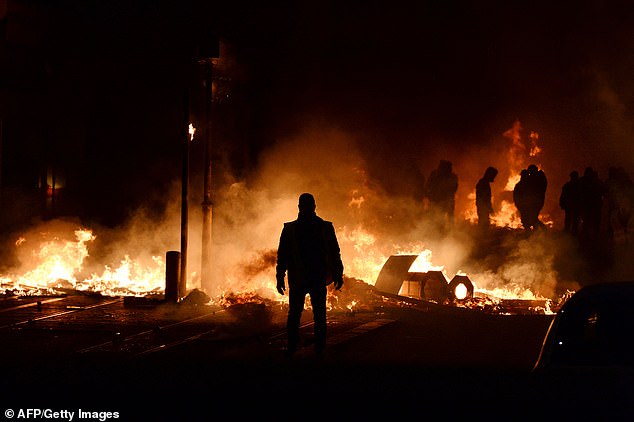 Liz Jones: ‘If this were Paris, people would be setting fire to things. There would be violence. The French take to the streets when they don’t get what they want. We don’t.’

But despite the festive air, they are keen to let me know that, with all the political uncertainty over Brexit (just that one word prompts elaborate eye-rolling and groans), and the vote on Theresa May’s deal on Tuesday, it’s not that they don’t care. It is just that they want to get on with their lives.

Sam Cartwright, 47, a learning support assistant, Lisa Tomlins, 41, a medical PA, and Carly Moon, 39, a health and safety co-ordinator, are best friends, and are knocking back the red wine for all the world as though we’re in an episode of Sex And The City.

All three voted to leave. And all three want Theresa May’s deal, no matter how flawed, to be voted through. ‘End of.’

‘Even though I feel cheated that when I voted to leave I didn’t have all the facts, my feeling is let’s move on, deal with it,’ says Sam.

‘I’m angry at the mess,’ adds Lisa. ‘I don’t feel Theresa May is the right person, but she’s the only person. She put her hand up, I admire her for that.’

If she loses on Tuesday, do they think she should resign? ‘We should have stood up to the EU more. But no, I don’t think she’ll resign.

‘She’s a bit of a Maggie. We don’t want her to bow down to all those men,’ adds Carly, doing a bit of a Beyoncé click of the fingers. ‘If it’s rejected, go back to the table. They will give us a better deal.’

And a second referendum? ‘Noooooooo!!?? Not another one!’ they chorus, cackling. Should Corbyn get a crack at the whip? ‘Nooooo!’

The transformation of Chelmsford surprises me – the cafes and restaurants where once there was just a solitary Wimpy; the artisan street food market selling everything from vegan dosas to sushi; the new bus station. 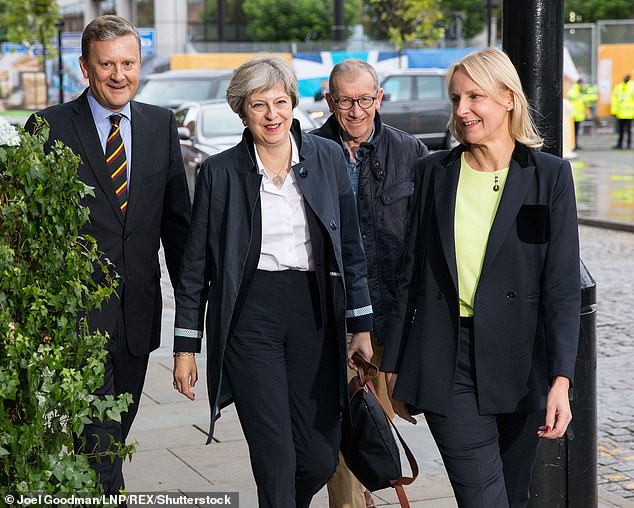 I was last here in 1975 to see The Towering Inferno inside an Odeon that still allowed smokers. Today, despite all the doomsayers predicting the death of the British high street, it’s vibrant and clean and booming and cosmopolitan.

Another surprise is that just 50 miles from Westminster, how far this lovely city feels from the infighting and power struggles of the elite.

Every single person I talk to – bar one very agitated young man, and one cantankerous pensioner – just wants the vote to go through ‘Please God’ on Tuesday, and for the country to move on.

And, here’s the biggest surprise of all: I hear barely one bad word directed at Theresa May. To a man and a woman, no matter which way they voted on June 23, 2016, they are all on her side.

Take Elizabeth and Paul Stone, who have run a gourmet burger stall for 15 years.

‘I voted to stay in, but I feel so sorry for her,’ says Elizabeth, 59. ‘Everyone is completely bored by it, so let her get on with it. Stop fighting! Vote yes on Tuesday. No second referendum.’

What does she think of all the men jostling for position around her? ‘Boris and all those others are a***holes,’ she says. We Essex girls don’t pull our punches.

Paul, 61, who also voted to stay in, is a fan of Mrs May: ‘MPs should vote for her deal. The public were missold, but I still say no to a second vote. It’s a shame to leave, as I think the world is too small. Young people have been let down, and it won’t change immigration, but let her see it through.’

I meet Melanie Adams, 38, who runs a cheese and pie stall. She too voted to stay in as she felt ‘misled’ by Boris, who she feels is ‘over’.

Despite the fact leaving will mean she will have to put up the prices of the French cheese on her stall, she still magnanimously hopes May’s deal succeeds.

‘I’m fed up with it,’ she tells me. She asks me to explain the sticking point of the backstop; I say ‘Ummmm’, and refer to my notes. She laughs. ‘I don’t understand it either!’ she says. ‘No one does. Look, Theresa May is in an impossible job. She gets more flak because she’s a woman.’ Who does she blame? ‘I blame David Cameron, and look what he did. Typical man, he ran off.’

Carol Morton is a 50-year-old manager at Ford. We are outside a giant Primark; she agrees that, if Primark and Zara had existed in the 1970s, we’d have both been so much more attractive.

She voted leave, and wants Theresa May’s deal to go through. ‘She has a hard job, and is trying to do her best for the country. I feel sorry for her. I look after 16 people in my job, and that’s hard enough.’ 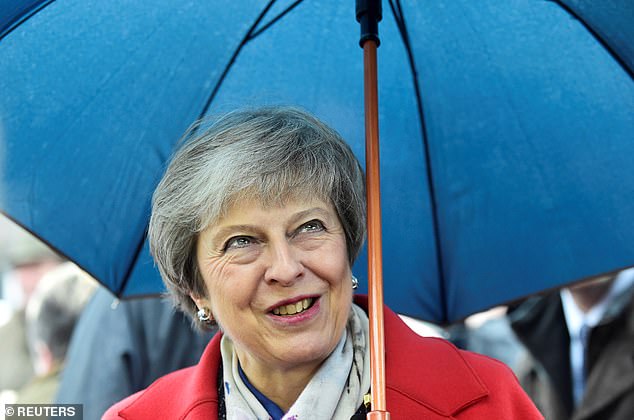 ‘She’s a bit of a Maggie. We don’t want her to bow down to all those men,’ adds Carly, doing a bit of a Beyoncé click of the fingers. ‘If it’s rejected, go back to the table. They will give us a better deal.’

And if she loses, should she resign? ‘No, I don’t think she should. I trust her, no one else.’

Michelle Matthews is a 46-year-old businesswoman, here shopping in River Island for a party outfit with her 24-year-old daughter, who squirms with embarrassment that her mum wants to speak out on a divisive issue that, in Chelmsford at least, seems perversely to be bringing people together.

‘I voted to leave, as immigration is a problem. Theresa May is doing her best, it’s a hard road, and I hope they vote it through. Otherwise, there will be a whole new set of problems.’

I’m aghast – not just at the seasonal ice rink, the Patisserie Valerie and how well dressed and affluent everyone is when my only shopping options as a teenager were the Levi’s stall on the market and Bonds’ haberdashery department – but at how pragmatic everyone is.

Almost everyone I talk to wants us all to stop bickering and to be adults. Inside Waterstones, I meet Bramwell Cross – he is 22, and works in an architectural practice. Why weren’t young men as handsome as him in my day, as articulate and well informed? He blushes.

‘I voted to remain, but I still think they should vote through her deal. What worries me is the uncertainty of it all. If it fails on Tuesday, will there be more hate crime, more division? I don’t want another vote, though I know a lot of young people do.’

The consensus in Chelmsford is that ‘the media want it to fail, her to go, as it will make a better story, sell papers, make us watch the news’.

The vast majority of shoppers I meet over the course of two days want the deal to go through: ‘If MPs vote it down, then they’re not listening to us,’ says one. ‘If only those in charge of us could grow up,’ a woman selling crêpes (crêpes!) tells me.

I only come across two people who want the deal to fail. One is an elderly pensioner who voted leave: ‘I knew what I was voting for. I want us out, no deal. I think Jacob Rees-Mogg talks sense. May has had time to learn how to be humiliated, she can deal with it. I blame the politicians who want to remain for this mess. Don’t forget: May was one of them.’

The second is Charlie Lock, a flame-haired, 20-year-old student at Essex University. Charlie is hopping mad at what has happened. ‘I was two days too young to vote in the referendum.

‘Forty-eight hours meant I had no say in my future. The deal is atrocious. In Europe, they took just 40 minutes to decide it was OK. Forty minutes! It’s better to stay in Europe. It’s a generational thing: young people like me love that the country is so diverse.’

On a crisp Saturday morning, I’m once again at the artisan food and Christmas market in Chelmsford. Still no one is rioting. It’s heads down, pin numbers at the ready, think only of Christmas.

I arrive armed with the news that a survey of Tory members has found 72 per cent reject Mrs May’s deal and want their MP to do the same. And that Amber Rudd, Secretary of State for Work and Pensions, is talking of ‘Plan B’.

I’m puzzled, as this doesn’t reflect Chelmsford at all.

I give the last word to Sharon, a retired librarian, braving the cold to hand out leaflets protesting at the shortening of opening hours at the lovely old library. ‘I voted to remain.’ Why? ‘It was the fabrication of Boris et al.

‘What they said wasn’t true, all that stuff on the side of the bus.’ She’s unusual among the older Chelmsfordians I’ve met. ‘Am I? I’m a young-thinking person. The first time I ever voted was to join the Common Market. I’m quite proud of that. What will happen next week? I’m going to quote Danny Dyer, “It’s a bit of shambles, innit.”