This is the terrifying moment two young lions team up to carry out a fierce attack on an older male in a furious exchange of blows.

The footage, filmed by Jonathan Sayaniel, a local to the Maasai Mara National Reserve, shows two younger males Maridadi and Kaka launching an attack on Ololparpit, a more experienced lion.

Maridadi and Kaka join forces to pin Ololparpit to the ground and swing at him with their paws in the frightening exchange. 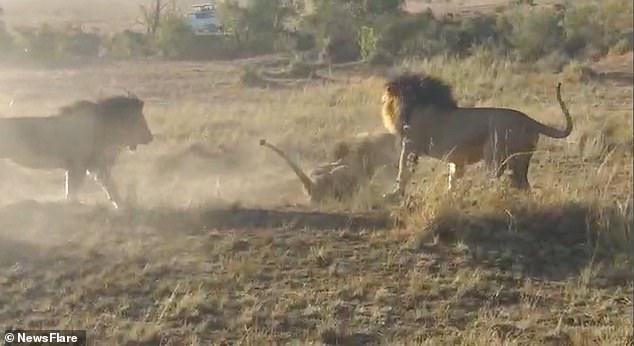 Mr Sayaniel said: ‘If he had lost the battle, Maridadi and Kaka would have almost certainly killed the young cubs in the pride to bring the females back for mating.’

Ololparpit survived the attack but is reportedly in ‘bad shape’ following the ferocious battle.

The video shows Maridadi and Kaka joining forces to take down Ololparpit using their powerful jaws and strong paws.

After Ololparpit’s fierce roar, the two youngsters are deterred and start circling their older counterpart from a distance. 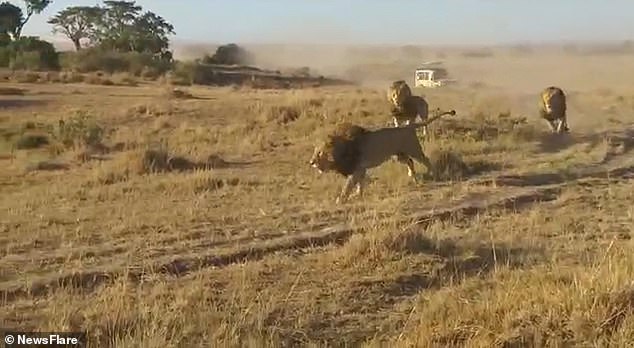 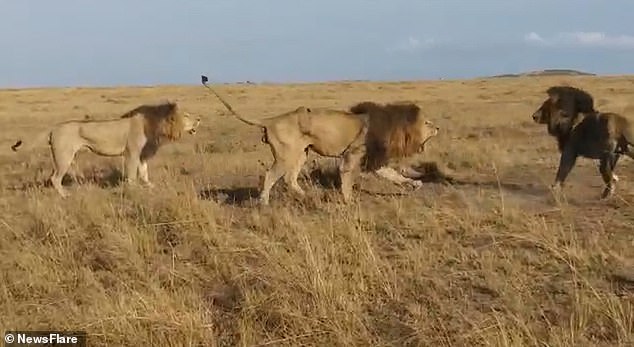 Despite being weakened by the fight, Ololparpit summons a fierce roar to ward off his attackers

Then all of a sudden, the attack continues as one of the younger lions leaps at Ololparpit jaws first.

Despite being old and weakened, Ololparpit summons a roar that makes Maridadi and Kaka retreta.

The footage then appears to show Ololparpit calling out for his partner Obarnoti after the fight.

Ololparpit in Maa (Maasai language) means ‘the one with a big black hair,’ Sayialel said.