Warsaw: Four people have been killed and more than 30 injured when lighting struck different locations in Poland's Tatra Mountains, a spokeswoman for the country's air ambulance service says.

Lightning hit a group of tourists on Giewont, a 1,894-metre mountain, after a sunny morning turned stormy, according to witnesses quoted on private broadcaster TVN24. The peak is a popular trekking destination in southern Poland. 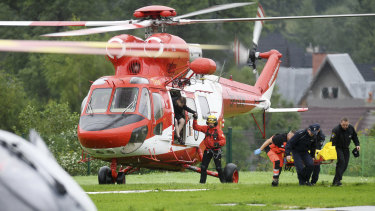 A rescue helicopter brings the first patients to hospital after lightning struck the Tatra Mountains.Credit:AP

Kinga Czerwinska, an air ambulance service spokeswoman, said some of the injured were brought by helicopter to the hospital in Zakopane, in the Tatras, while others were taken elsewhere.

Witnesses said the thunderstorm came suddenly on a day that began with clear weather.

"We have a very severe situation," the head of TOPR, Poland's voluntary mountain rescue organisation, was quoted as saying by another broadcaster, state TVP Info.

Tourists climbing Giewont in Poland often aim to end their trip at the top, where a 15-metre iron cross was installed in 1901. The cross is said to attract lightning. 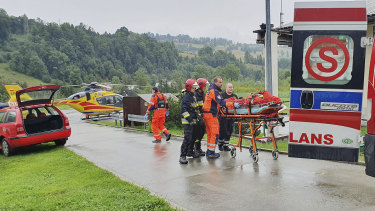 Other victims were hurt in different parts of the mountains, which spread over 57 kilometres in southern Poland. Four helicopters and a number of rescuers were still working helping victims, TVP Info said.

More than two dozen rescuers were already trying to save two cavers trapped in Poland's Tatras, after a tunnel flooded and blocked their exit.

Initial reports suggested children were among the group struck by lightning.