A light plane has crashed at Heatherton, in Melbourne’s south-east, with at least one person being treated by paramedics.

The plane had just taken off from Moorabbin Airport.

A spokeswoman for Ambulance Victoria said paramedics were called to the crash site, near the Capital Golf Course, just after midday on Tuesday. 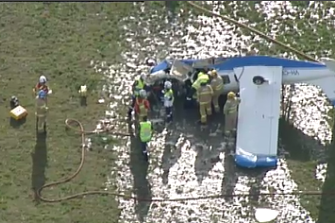 A plane has crashed at Heatherton.Credit:Nine News

She said crews remained at the scene and at least one person needed treatment.

Police were yet to arrive at the scene as of 12.40pm Tuesday.