For Melbourne mother of four Samantha Cafaro, Les Twentyman is more than a foundation. He's become her family.

When her house burnt to the ground when she was 12 and her parents and siblings found themselves without a home, it was the kindness of the prominent youth worker and his Christmas appeal that helped them through. 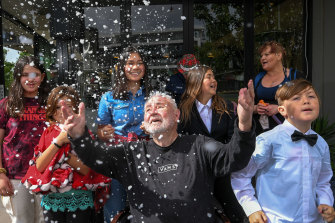 Close to two decades on, Ms Cafaro has never missed one of his foundation's Christmas parties, this year bringing her 10-year-old daughter Madison along too.

"It's the unity, the family feeling we have here that keeps us coming back," she said.

"When we come we're not just a number, we don't feel like we're disadvantaged or that we don't have as much as everyone else. 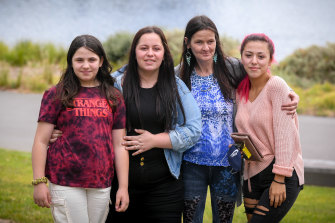 The annual Les Twentyman Foundation Christmas gathering looked very different this year; no sweeping hall filled with hot meals or gifts for the more than 500 people who usually attend.

Instead, 50 families from the western suburbs gathered outdoors at Cravin Crepes in Edgewater to reflect on one of their toughest years yet.

Mr Twentyman said that in late June when parts of Melbourne's west were put into lockdown weeks before other parts of the city, it divided many already disadvantaged communities.

He said he hoped Christmas would prove a time for reconnecting and to celebrate making it through such a challenging year. 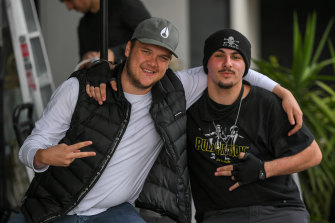 "The kids in the western suburbs went into lockdown almost four weeks before everyone else and that created a lot of postcode discrimination. It was very divisive," Mr Twentyman said.

"Heading into 2021, we want people to be kind to one another. And to know help is sometimes just a phone call away."

Harrison Thorpe, who's rap name is Kawaja, penned the lyrics for Tough with his father. He says it explores his own mental health battles, his OCD and his father's experience as a street kid.

Mr McAlpine also used his battles with alcoholism and anxiety to help inspire the "street poetry" which they hope will help empower other young people to tap into their own talents.

"Pain is a very good artistic catalyst, that's why I wrote the verse: 'If words were tears, it would put to shame Shakespeare's poetic endeavours'," Harrison Thorpe said.

"Your challenges don't have to define you. Embrace them and turn them into your skills."

Maribyrnong mayor Michael Clarke said his community, like most in Victoria, had lived through a major crisis this year and survived.

He hoped 2021 would bring a newfound sense of kindness and reflection for many.

"We need to continue to care for one another," Cr Clarke said.