Victoria’s legal watchdog is threatening to cancel the practising certificate of the lawyer behind a class action launched on behalf of 3000 public housing tower residents who were compulsorily shut inside their homes at the height of the coronavirus pandemic’s second wave.

Emails seen by The Age confirm the Victorian Legal Services Board wrote to solicitor Serene Teffaha in March to provide her with a “notice of proposed cancellation of practising certificate”. 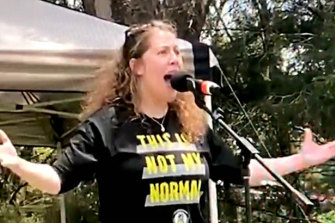 Solicitor Serene Teffaha of Advocate Me says she intends to contest the action from the Victorian Legal Services Board.

The notice was sent to Ms Teffaha, a high-profile anti-lockdown activist, at the same time that she filed the class action on behalf of thousands of public housing tenants subjected to the hard lockdown by the state government and confined to their homes in July 2020.

The emails sent between Victorian Legal Services Board investigator Kimberley Anderton and Ms Teffaha do not specifically indicate the conduct under scrutiny by the board.

The lawsuit claims to represent all 3000 people subjected to the compulsory lockdown.

The class action, fronted by plaintiff Idris Hassan, alleges the detention of people in the towers was unlawful and beyond the powers conferred under state government legislation to manage the pandemic. Mr Hassan said he has no concerns about the litigation proceeding.

Members are seeking damages for false imprisonment, battery, assault, negligence, aggravated and exemplary damages, and costs, as well as declarations that the state government and police actions were unlawful.

Ms Teffaha rose to prominence as a member of anti-lockdown campaigns.

The lawyer and her Preston law firm Advocate Me had been seeking clients for a class action that includes people affected by any form of detention, mandatory vaccination, business closures, residential aged care isolation, cross-border rules, contact tracing, compulsory testing and various other measures. 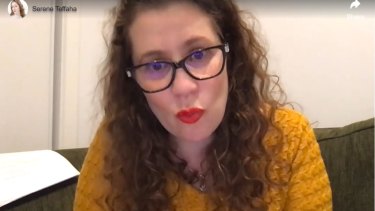 Ms Teffaha in a video that appears on the Advocate Me website.Credit:Advocate Me

Ms Teffaha said she intends to contest the action from the Victorian Legal Services Board.

She said if she loses her licence it will not affect the class action and she has written a whistleblower complaint against the legal watchdog for what she considers to be the targeting of her litigation.

“If they cancel my licence my clients will simply instruct someone else,” she said.

She said she has never had any client complain about her.

Ms Teffaha has at different times offered criticism on social media of government programs and institutions, including a dispute with members of the judiciary. She said her previous activism includes advocating for child sexual abuse and family violence survivors, government transparency and whistleblowers.

A senior member of the Family Court of Australia, deputy principal registrar Virginia Wilson, sent a letter to the Victorian Legal Services Board in January about Ms Teffaha’s conduct in a family law case when Justice Kirsty Marion Macmillan took the unusual step of restraining Ms Teffaha from representing her own client.

And Deputy Chief Magistrate of the Queensland Magistrates Court Anthony Gett referred Ms Teffaha to the Legal Services Commission in Queensland during a hearing in open court.

In January Ms Teffaha said the Family Court has “many corruption issues”, which prompted a condemnation from the Australian Bar Association and the Law Council. They said her comments were “baseless, inappropriate and undermining” of the criminal justice system and warned there was no place for the claims.

Ms Teffaha accused the judges of perverting the course of justice.

Victorian Ombudsman Deborah Glass found the government’s decision to immediately lock down the towers violated tenants’ human rights while the rest of the state had the chance to prepare for restrictions.

Dr van Diemen, who was the most senior public health official on the day of the decision, told Ms Glass she was “quite terrified … that we would see within a week many hundreds of [COVID-19] cases” and that delaying a day would not have made “a hugely significant difference”.

The class action has not yet been listed for a hearing date.

A spokesman for the Victorian Legal Services Board said it could not comment on ongoing investigations.