State Labor MP Mary-Anne Thomas has emerged as the frontrunner to fill the spot in the Andrews government’s cabinet left vacant by Wednesday’s surprise resignation of attorney-general Jill Hennessy.

Ms Thomas will contest a ballot of the party’s Socialist Left caucus in the coming days against Eltham MP Vicki Ward. However, Ms Thomas’ experience as a cabinet secretary and the probable backing of Premier Daniel Andrews are expected to give her the edge. 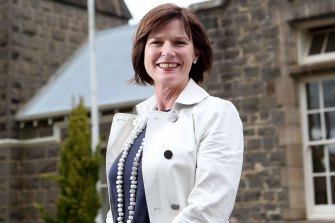 Should Ms Thomas prevail in the ballot, which has yet to be formally arranged, her elevation to cabinet would make the appointment more likely of Agriculture Minister Jaclyn Symes to succeed Ms Hennessy in the attorney-general’s portfolio, party sources said.

Labor insiders, speaking on condition of anonymity, said a newly promoted Ms Thomas, who represents the regional seat of Macedon, would be a good fit to take over Ms Symes’ non-metro portfolio duties, avoiding the need for a disruptive general cabinet reshuffle.

Ms Thomas has been in Parliament since the 2014 election after a career as a teacher, trade unionist and public servant.

She was named in November at the Independent Broad-based Anti-corruption Commission inquiry into planning controversies at Casey council as one of six Labor MPs and ministers to have accepted political donations from property developer John Woodman prior to the 2018 state election.

Replacing Ms Hennessy in cabinet with another woman would also help Mr Andrews with the gender problem emerging in his senior ministry, where just two of eight “co-ordinating” ministers are female after the departure of Ms Hennessy and of Jenny Mikakos from Health in October.

The appointment of either of the other two potential contenders for the Attorney-General’s role, Women’s Minister Gabrielle Williams and Public Transport Minister Ben Carroll, would be likely to trigger a broader reshuffle. This is not considered an attractive option for a government that has had six ministers resign or be sacked this year.

Ms Hennessy announced her resignation on Wednesday after two years in the high-profile job, saying she wanted to spend more time with her daughters while they were in their final years of high school.

The outgoing minister is not leaving politics. She said she would recontest her Altona seat at the 2022 state election. This is a possible indication that Ms Hennessy intends to return to the frontbench in future and she is still considered a likely successor to Mr Andrews should he decide to bow out of the top job.

Ms Hennessy has not spoken publicly since she issued her resignation statement but the Premier said on Thursday that his “great friend’s” career was far from over.

“If you look at another great friend and colleague of mine, Natalie Hutchens … who for a time went to the backbench because she had family issues that she needed to deal with, very personal issues …” Mr Andrews said.

“Now she’s back in the cabinet room doing an outstanding job, and Jill, she indicated she wants to run again in 2022, so this is not an obituary to her career by any stretch.”