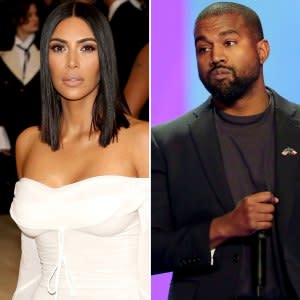 Keeping her head up. Kim Kardashian has been the target of Kanye West‘s recent posts about her parenting skills, but she’s still hopeful that they’ll eventually work things out.

“Kim is deeply hurt by the fact that North could come across Kanye’s posts and it could affect her,” an insider exclusively tells Us Weekly of the Skims founder, 41. “She’s doing her best with the joint custody, but there are certain things that are hard to control.”

The “Famous” rapper, 44, slammed his ex-wife in a since-deleted Instagram post on Sunday, March 13, claiming that he had just spoken to Kardashian about North, 8, posting on TikTok.

“I told her to stop antagonizing me with this TikTok thing,” the Yeezy designer said in the video. “I said, ‘It’s never again.’ I am her father. I know y’all don’t respect fathers and the idea of family and the media tries to promote something. I said, I am not allowing my daughter to be used by TikTok, by Disney. I have a say-so.”

The former spouses, who called it quits in February 2021, also share children Saint, 6, Chicago, 4, and Psalm, 2. In his post on Sunday, West claimed that the beauty mogul has prevented him from seeing his children.

“I don’t have custody, I had to fight to have my kids not on TikTok,” he alleged. “It’s always been a gang. It’s like we’ve never had Christmas anyplace else other than one location.”

Though the Grammy winner hasn’t backed down on his criticism of Kardashian and her boyfriend, Pete Davidson, the insider says that she’s looking forward to a day when they can all put the drama behind them.

“She and Kanye don’t see eye to eye on a lot of things which is very unfortunate, but it’s what she’s dealing with,” the source tells Us. “It’s a daily struggle and she hopes they can soon coparent amicably.”

On Monday, March 14, the Selfish author publicly asked her ex-husband to stop spreading misinformation about the family’s custody situation. “Please stop with this narrative, you were just here this morning picking up the kids for school,” she wrote in an Instagram comment.

The reality star posted the message in response to a photo shared by West that showed a black backpack with three pins on it: an alien, Kardashian and the “Heartless” artist.

“This was on my daughter’s backpack when I was ‘allowed’ to see her last week,” the producer wrote in his caption, referencing North. “This is why I go so hard for my family I am wired to protect my family at all cost[s]. As the priest of my home Don’t worry Northy God is still alive.”