Kim Jong-un says sorry: Rare apology after South Korean is shot dead at sea and his body ‘burned by the North’s troops’ as he tried to defect to the communist state

Kim Jong-un offered a rare apology today after a South Korean fisheries official was killed at sea while seemingly trying to defect to the North.

The 47-year-old man was shot dead by North Korean soldiers and his body allegedly set on fire as a precaution against coronavirus.

It was the first known killing of a South Korean by the North’s forces for a decade, prompting outrage in the South.

In a letter, Kim said he was sorry for ‘disappointing President Moon and South Koreans’ rather than helping them in the face of the ‘malicious coronavirus’, adding that the incident should not have happened. 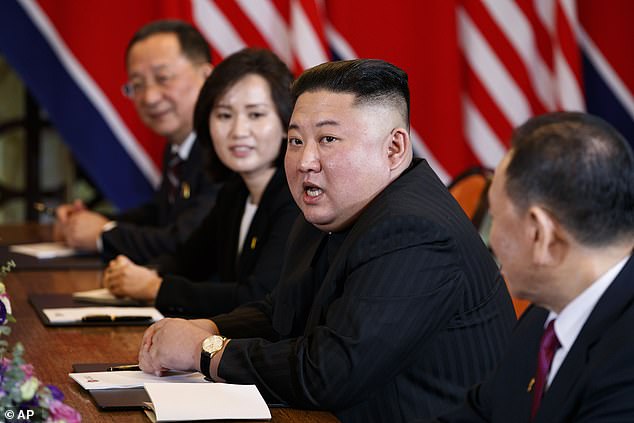 I’m sorry: Kim Jong-un (pictured) offered a rare apology to South Korea after a fisheries official was shot dead while apparently trying to defect to the North

The letter sent by the North’s ruling party acknowledged that around 10 shots were fired at the man who had ‘illegally entered our waters’ and failed to identify himself.

Border guards fired on him in accordance with standing instructions, the letter said.

However, the North denied setting his body on fire – claiming it was no longer visible and that guards had burned his flotation device as a precaution against the virus.

‘The troops could not locate the unidentified trespasser during a search after firing the shots, and burned the device under national emergency disease prevention measures,’ the letter said, according to the South’s top security adviser Suh Hoon.

Seoul military officials say the man was interrogated while in the water over several hours and expressed a desire to defect, but was killed after an ‘order from superior authority’.

The man – who was wearing a life jacket – disappeared from a patrol vessel near the western border island of Yeonpyeong on Monday.

North Korean forces located him in their waters more than 24 hours later, and he was killed around six hours after being found.

Reports said his shoes were found on board the patrol vessel, suggesting he had gone in the water in an attempt to defect to the North.

‘He was shot dead in the water,’ an official from the South said. ‘North Korean soldiers poured oil over his body and burnt it in the water.

‘We assess it was carried out under the North’s anti-coronavirus measure,’ he added.

Pyongyang has closed its borders and declared an emergency to try to protect itself against the virus which first emerged in neighbouring China.

However, the North has not admitted to a single case of the disease, which could cause havoc in the country’s under-equipped health system.

South Korean media reports said the man was in his forties with two children, but had recently divorced and had financial problems. Defecting to the North is rare, but not unheard of. 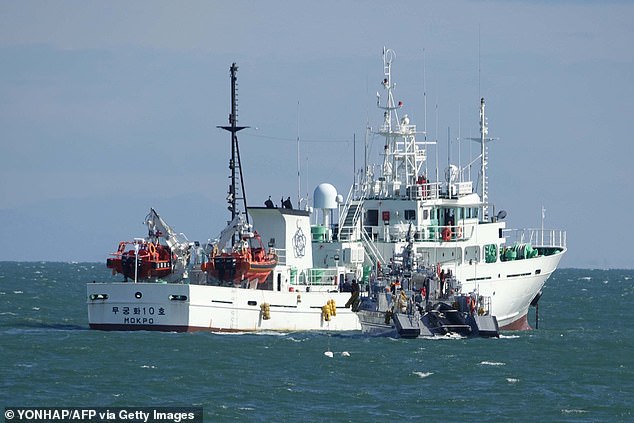 Apologies from the North – let alone attributed to Kim himself – are extremely rare, but the shooting was the first time since 2010 that North Korean forces have killed a citizen of the South.

The North accused Seoul of firing first but the bombardment was described as one of the worst clashes since the Korean War ended in an armistice in 1953.

In 2008, a North Korean soldier gunned down a female South Korean tourist who walked into a forbidden area at the North’s Mount Kumgang resort.

The shooting prompted Seoul to suspend the money-spinning visits, which have yet to resume.

In July, a man who had defected to South Korea three years ago triggered a coronavirus scare when he crossed back over the heavily monitored border.

His arrival prompted North Korean officials to lock down a border city and quarantine thousands of people over fears he may have had the coronavirus.

An infection was never confirmed and the World Health Organisation later said his test results were inconclusive.

Last week, South Korean police arrested a defector who they said had tried to return to North Korea by breaking into a military training site in the border town of Cheorwon.

Inter-Korean relations have been strained in recent months with nuclear talks at a stalemate between Pyongyang and Washington.

In June, the North blew up a liaison office set up in a border town in 2018 which was meant to foster better ties between the two countries.