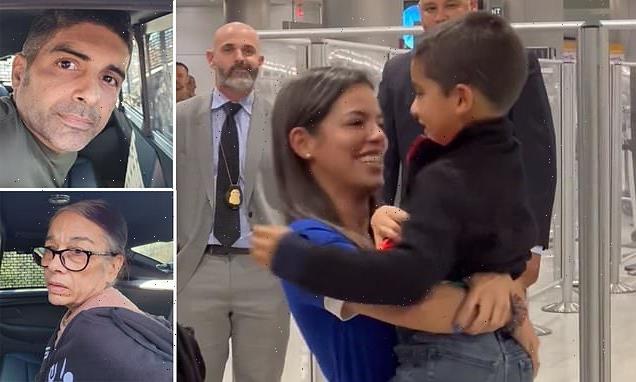 Heartwarming moment kidnapped Miami boy Jojo Morales, 6, is reunited with his mom two months after being abducted by his father and grandmother and smuggled to Canada

A little boy from South Florida is back home with his mother after he was found in good health in Canada.

Jojo Morales, 6, was abducted two months ago by his father, Jorge Morales, 45, and his grandmother, Lilliam Pena Morales, 68, according to police.

Yanet Concepcion, Jojo’s mother, had gone to pick up her son on August 27 as part of a custody exchange only to find he had disappeared.

The Tuesday night reunion between mother and son at the Miami International Airport was tearful and joyous. 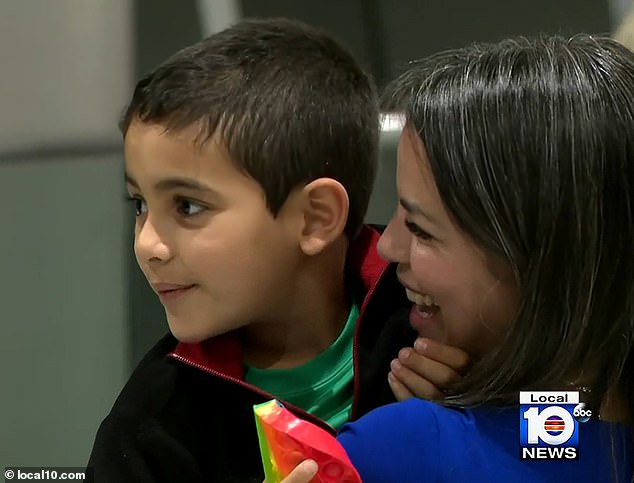 The pair were reunited Tuesday night at the Miami International Airport. Concepcion said she had ‘missed that voice so much’ and that she just wanted to hug her son 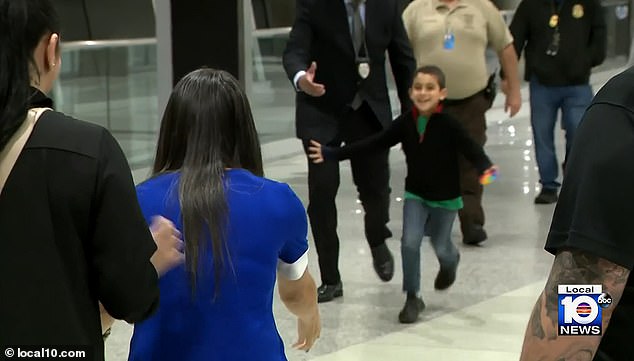 Jojo was greeted Tuesday night by hugs, kisses and toys from his mother and other family members after returning to the area for the first time since August 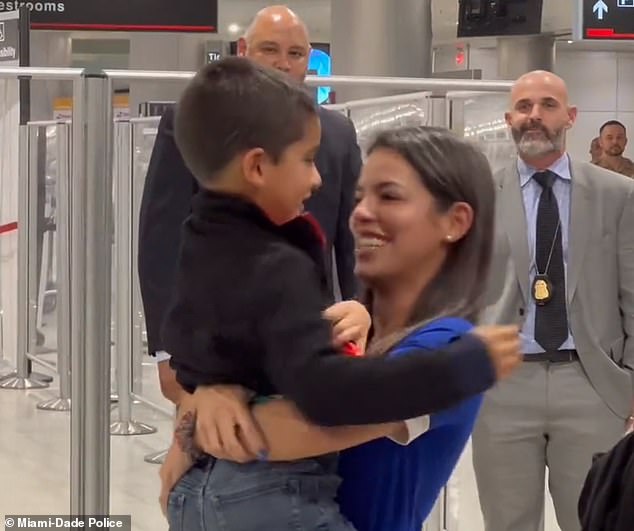 In August, an Amber Alert was sent out for Jojo sparking a nationwide search for the child. Several days ago, Jojo and his father and grandmother were spotted in a Walmart in New Brunswick, Canada 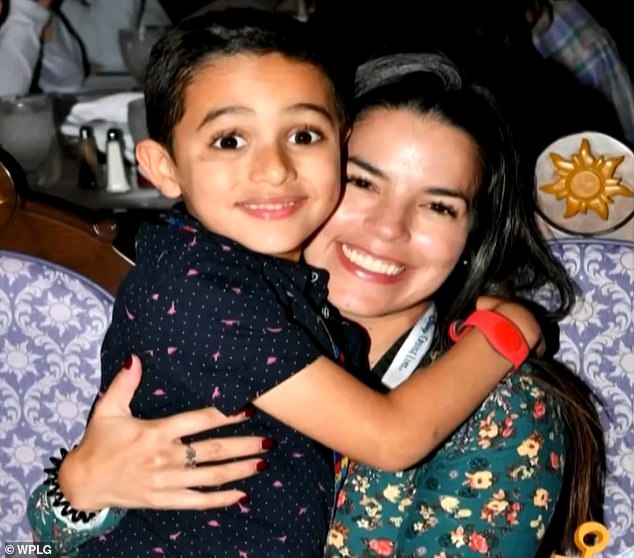 Jojo Morales, 6, was allegedly kidnapped in August by his father and grandmother. He was spotted safe and healthy two months later in Canada and has now been returned to his mother Yanet Concepcion (right)

‘I just want to hug him,’ Concepcion told reporters.

‘I missed that voice so much,’ she said, admitting it will now be hard to let Jojo out of her sight.

Investigators say Jorge and Lilliam were arrested by the Royal Canadian Mounted Police after a tipster spotted Jojo at a Walmart in the Canadian providence of New Brunswick.

Concepcion said she wanted to tell the tipster, ‘thank you for saving my son’s life.’

After two months she described as living a nightmare, Concepcion got a call from an FBI agent on Sunday that her son had been found and was safe.

An Amber Alert was issued in late August for the missing child sparking a nationwide search.

Maine State Police say Jojo and his father and grandmother may have been spotted in an SUV that was located in Littleton, Maine close to the Canadian border. 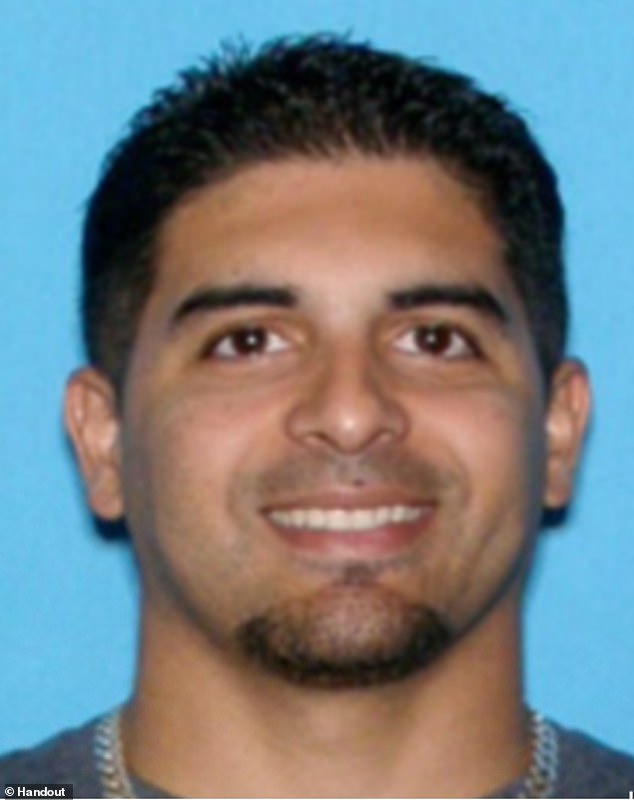 Jorge Morales, 45, will now face serious charges for alleging kidnapping his son. Morales and Concepcion had been in engaged in a brutal custody battle following her January 2019 petition for divorce 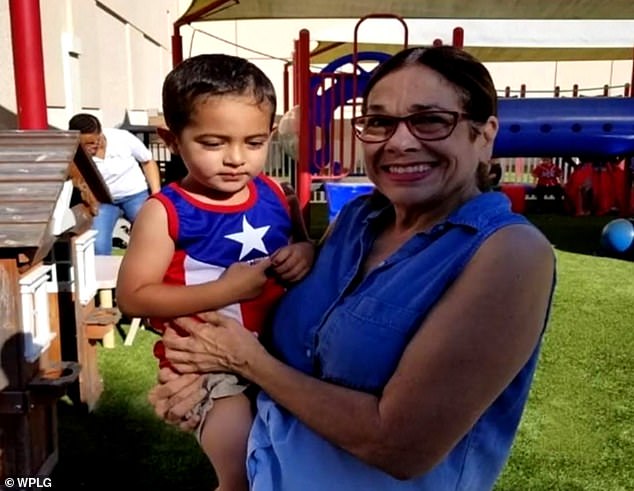 Lilliam Morales, 68, Jojo’s grandmother, was also arrested in Canada for abducting her grandson. She had, prior to the alleged abduction, sold her Miami-area house 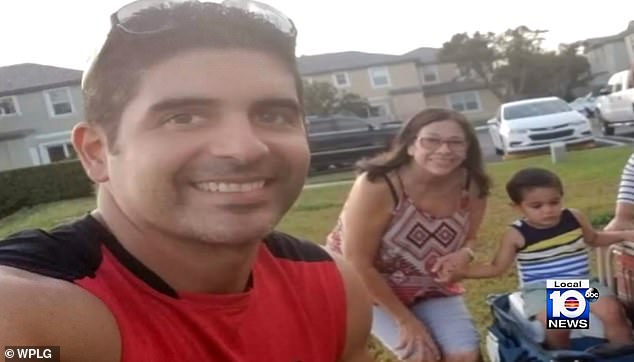 Police say the three may have been spotted in an SUV in Littleton, Maine, near the Canadian border several weeks ago 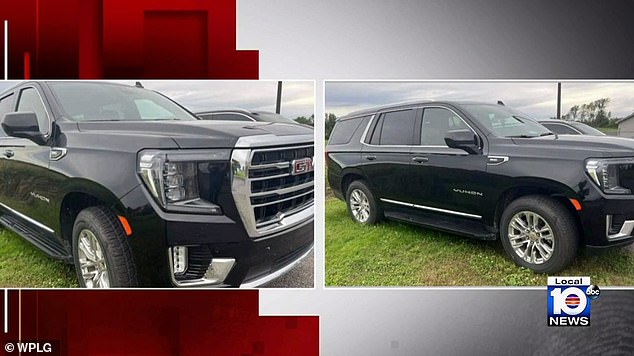 The SUV found in Littleton, Maine with some of Jojo’s possessions in it. Concepcion said her ex spent the better part of a year researching how to live off the grid

Concepcion previously said she believes her ex had been researching living off the grid for the better part of a year and that he and his mother are now facing serious felony charges.

She says she and her son will now make up for lost time and recreate Halloween and celebrate her birthday that passed during the time he was missing.

Back in August, Concepcion had gone to Morales’ apartment to retrieve her son when she found the place empty and Jojo missing.

At the time she said that her son, who is on the autism spectrum, had told her that his father wanted to ‘tale him to live on a farm with windmills and wanted me to go with him.’

Concepcion and Morales had been engaged in an ongoing custody battle since she filed for divorce in January 2019.

Prior to the alleged kidnapping, Morales had allowed his nursing license to lapse his mother had sold their house.

Miami-Dade Police Director Freddy Ramirez said the successful effort to locate Jojo and get him home was an example of ‘local, state, federal, and international law enforcement, along with the United States and State Attorney’s Office coming together for the safety of a child and will continue to work together to fight the greater evil.’