TDP, which rules Andhra Pradesh state, walks out of alliance and backs no-confidence motion against Modi in parliament. 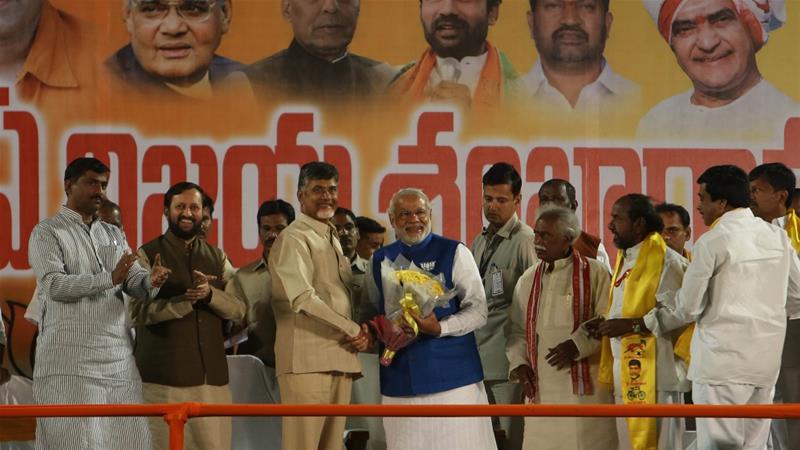 An ally of Indian Prime Minister Narendra Modi has walked out of the ruling coalition headed by the right-wing Bharatiya Janata Party (BJP), alleging Modi “neglected” the southern state of Andhra Pradesh.

On Friday, the Telugu Desam Party (TDP), which rules Andhra Pradesh, formally ended the alliance days after the BJP lost a crucial by-election to three parliamentary seats in the northern Hindi-speaking states.

Central ministers belonging to the TDP resigned from the cabinet last week after Finance Minister Arun Jaitley denied “special category” status to the southern state – which would have allowed more central funding to the state. 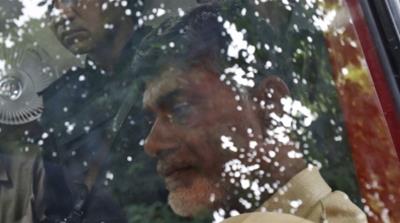 The TDP has been demanding special financial assistance since 2014, when Andhra Pradesh was split into two states. Hyderabad, the capital of the united Andhra, went to the newly created Telangana state, taking along with it huge source of state revenues.

“The writing was on the wall for some months now. Both the parties were beginning to get uncomfortable with the alliance. The TDP and the BJP both accused the other of behaving like the ‘big brother’,” journalist and analyst TS Sudhir told Al Jazeera.

The parting of ways between the TDP leader and chief minister of Andhra Pradesh, N Chandrababu Naidu, and Prime Minister Modi snuffs out the little indirect influence the ruling BJP had in India’s south.

A motion of no confidence

Modi’s BJP does not rule any of the southern states, although it is fighting a keenly contested election this year in the state of Karnataka, currently ruled by the Congress party. The BJP runs government in 22 of India’s 29 states.

Political analyst Nilanjan Mukhopadhyay says breaking of the alliance is “a signal to other allies of the BJP to start weighing their options” ahead of the 2019 general elections.

“Other partners will now rethink whether it’s worth continuing with Modi or not. It spells trouble with a Big T for Mr Modi. It is a consequence of the arrogance with which they have been dealing with their allies,” Mukhopadhyay told Al Jazeera.

The Hindu nationalist party had swept to power in 2014 with 282 members of parliament. After a series of defeats in by-polls, the tally for the ruling party has now reduced to 274 – two seats more than the majority mark.

The TDP has now been forced to move a motion of no-confidence against the Modi government after Andhra’s main opposition party, YSR Congress, earlier initiated the move.

With Shiv Sena, another Modi ally publicly criticising the government in recent months, its support cannot be taken for granted.

Several opposition parties on Friday said they would back the motion of no confidence.

“In terms of numbers in the parliament, the Modi government is safe. But the TDP wants to use the platform to highlight that the central government has gone back on its promise of special status,” analyst Sudir said.

“Electorally the BJP might calculate that they don’t have much to lose as it’s not a big player in the state. But in terms of national image, the BJP will be seen as a party that is not to be trusted as an electoral partner. They will lose out on brand equity of the BJP and personal equity of Narendra Modi,” he adds.

But the BJP remains defiant.

“TDP’s exit is a loss for the TDP, not the BJP … Far from being a threat, TDP’s exit is a timely opportunity for the BJP to grow in Andhra Pradesh,” GVL Narasimha Rao, national spokesperson of the BJP said on Friday.

Apart from this, a new surge of regionalisation of Indian politics could be taking shape to act as pressure groups, warn experts.

“The southern states contribute maximum tax revenues to the Centre, but the latter is diverting the money to the development of northern states,” the chief minister said.

Analyst Sudhir says “Naidu is the latest in a long list of politicians, chief ministers, film stars who have referred to this divide”

“The political flag of south Indian film star Kamal Haasan has six arms holding each other, denoting the solidarity among six southern states of India,” he said.

“There is an apprehension that southern states, following a controversial constitutional amendment, will have lesser seats in the parliament compared to cow-belt (northern region). This could mean reduction of political power for the south,” he said.