Has Keith Richards mellowed out?! Legendary Rolling Stones hellraiser says he ‘stopped drinking a year ago’ and stopped the ‘other stuff’ because he ‘wasn’t feeling right’ (and his bandmates couldn’t be happier!)

Legendary Rolling Stones guitarist Keith Richards confessed he has curbed his famous party lifestyle by cutting back on drinking and ‘the other stuff’ after getting fed up with how it made him feel.

Richards, who turns 75 on December 18, will embark on the U.S leg of the Stones tour next year with bandmates Mick Jagger, Ronnie Wood and Charlie Watts.

But this time, he told Rolling Stone magazine, he will perform in front of one million people in 14 cities completely sober. 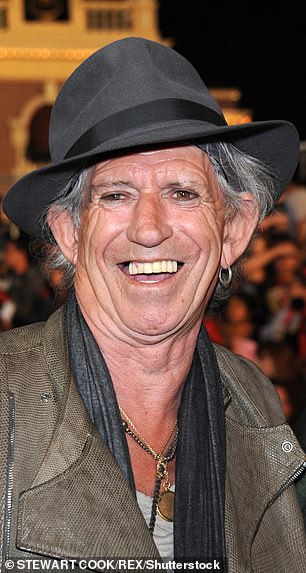 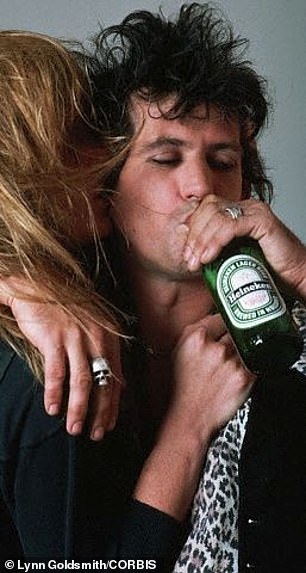 Richards told the magazine he pulled the plug on drinking around a year ago, having finally grown tired of it after a decades of partying.

The Rolling Stones, of which Richards is a founding member, are so famed for their hedonism and debauchery that their actions in the bands heyday have set the bar for what it meant to be a decadent rock star ever since.

‘It was time to quit,’ he said. ‘Just like all the other stuff.’

At his first trial he was sentenced to a year in prison for allowing cannabis to be smoked on his property, though this was later overturned. 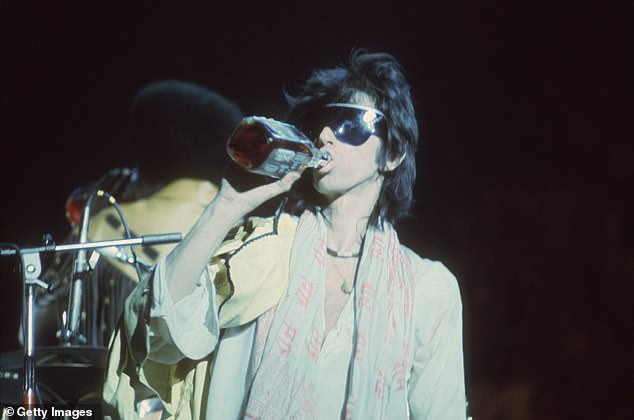 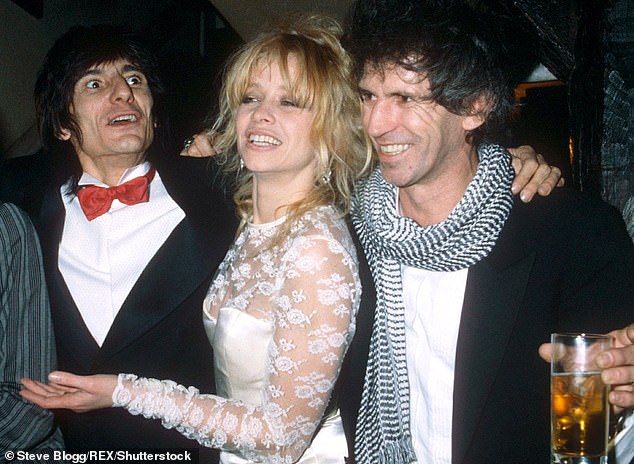 However the band were subsequently relentlessly pursued by police throughout their 1972 North America tour – dubbed the ‘Cocaine and Tequila Sunrise tour’ – which was when they first started book up entire floors of hotels.

On the way a show in Nebraska, the Stones were pulled over by the police, who uncovered an enormous stash of illegal drugs.

Nothing came of it – apart from a $165.50 fine for reckless driving – but Richards says of the tour in his biography: ‘The State Department had noted riots (true), civil disobedience (also true), illicit sex (whatever that is), and violence across the United States.’ 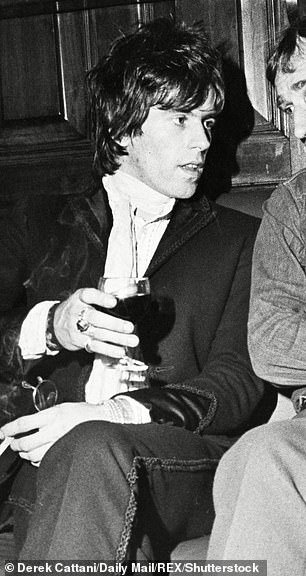 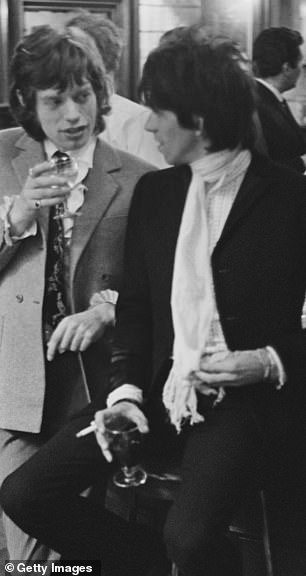 The Rolling Stones are so famed for their hedonism and debauchery that their actions in the bands heyday have set the bar for what it meant to be a decadent rock star ever since. 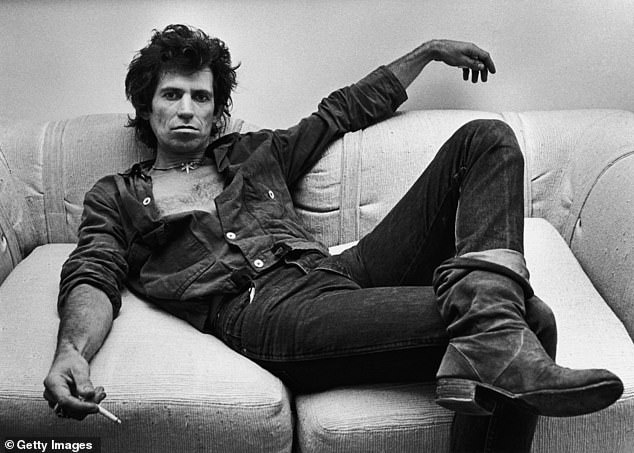 Guitarist Keith Richards of the Rolling Stones, lounges in his New York City, New York, office during a 1980 portrait session

Richards further claimed in his biography that he used to walk down Oxford Street openly carrying ‘a slab of hash as big as a skateboard’.

In 1977 he was arrested for heroin and cocaine possession in a Toronto hotel and charged with importing narcotics.

Facing a minimum sentence of seven years, Richards evaded jail time by striking a plea bargain that including holding a show to raise money for the blind.

He finally quit cocaine after he fell from a tree in Fiji and suffered a severe head trauma that required live-saving surgery in 2006. 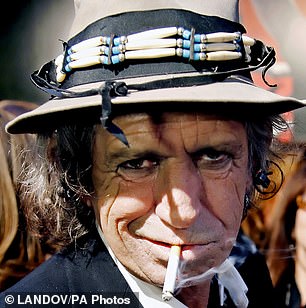 While he still allows himself the ‘occasional’ glass of wine or beer, Richards admits curbing his drinking has been an ‘adjustment’.

‘You can call it that, yeah,’ he told Rolling Stone. ‘But I don’t notice any difference really – except for I don’t drink. I wasn’t feeling [right]. I’ve done it. I didn’t want that anymore.’

Ronnie Wood, himself sober for eight years – told Rolling Stone that Richards has become ‘a pleasure to work with,’ since he cut back on the substances and alcohol.

‘Much more mellow. He’s open to more ideas, whereas before I’d kind of grit my teeth and go, “He’s gonna give me some shit for saying this.” Now, he’ll say, “That’s cool, man”,’ Wood said.

Wood said that the old Richards used to go over the top and could get nasty if he drank too much, but he realized this and started to cut down slowly. 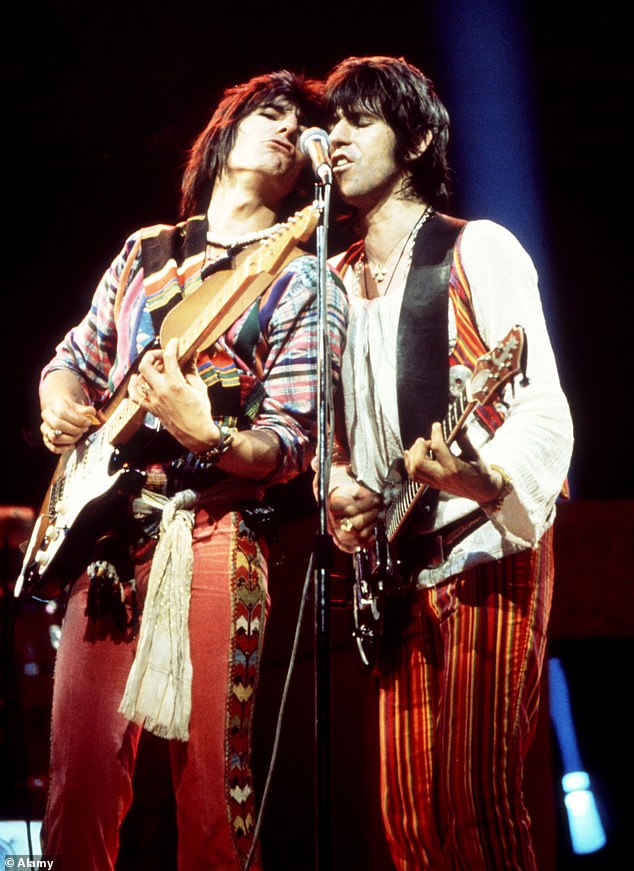 Keith Richards (right) with Ronnie Wood, who says he will be supporting Richards all the way through his sobriety

Wood added that if Richards perseveres with sobriety, he will be there to support him all the way.

Richards said there was an ‘interesting’ difference playing onstage sober than his previous alcohol-fueled performances, and Wood agreed that now the two guitarists work ‘more conscientiously’ when it comes to their guitar riffs, weaving them together more carefully.

The latest leg of the Rolling Stones tour kicks off on April 20 at Miami’s Hard Rock Stadium.