David Davies went head to head with Labour MP Anna Turley on this afternoon, but then was berated for checking his phone in the middle of the debate.

The two politicians descended into a slanging match over Britain's exit from the EU – and what it would mean.

"You're interrupting me!" Ms Turley blasted, after Mr Davies accused her of not knowing the figures about Brexit.

"So you didn't look at the figures that came out of the Treasury?" he hit back. "You're not giving me much of a chance here…"

The two carried on bickering before Mr Davies gave up, telling her:  "You carry on, I'll check my phone while you have a little chat."

A shocked Ms Turley appeared shell shocked as he whipped out his mobile, adding sarcastically: "This is an amazing way to debate."

"That's completely unacceptable, don't speak to her in that fashion." 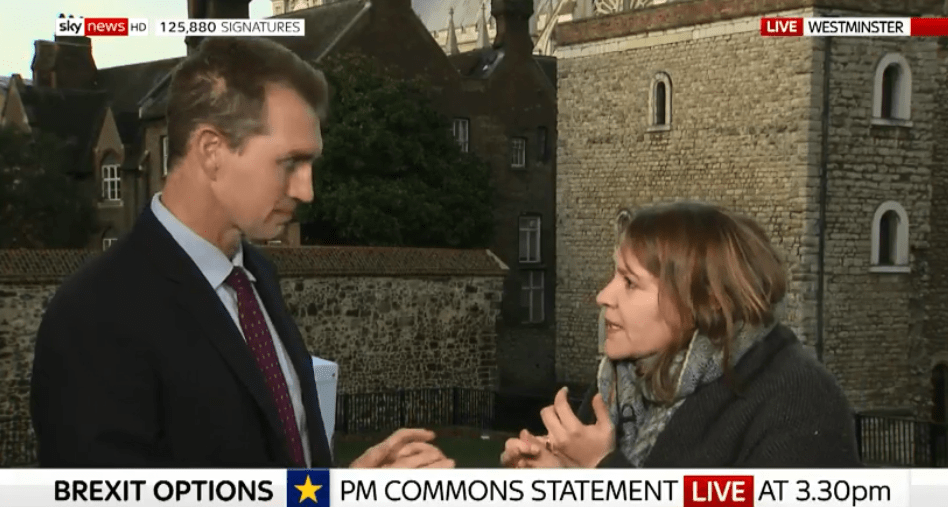 He protested that he wasn't be patronising, he couldn't get a word in, but was told he'd already had enough time to make his point.

The Brexiteeer then left the show, and Ms Turley carried on.

"OK, you two carry on, thanks very much," Mr Davies said as he left, buttoning up his jacket as he went.

"Thanks for joining us, we really appreciate it," Kay added.

The spat comes as MPs are still bitterly divided over what to do about Brexit.

The PM's deal is set to come to MPs for a vote within four weeks, Theresa May confirmed today.

But it's likely to get slapped down with dozens saying they will vote against it.

If that happens, no one can agree on what the Plan B for Brexit should be.

Half of Mrs May's Cabinet want her to go full steam ahead for No Deal, but the other half want to put a series of votes to the Commons to find out what MPs will support.

The PM will hold a crunch meeting of her top team tomorrow to discuss the way forward.

But she's still insisting that she can get her deal through Parliament after Christmas.