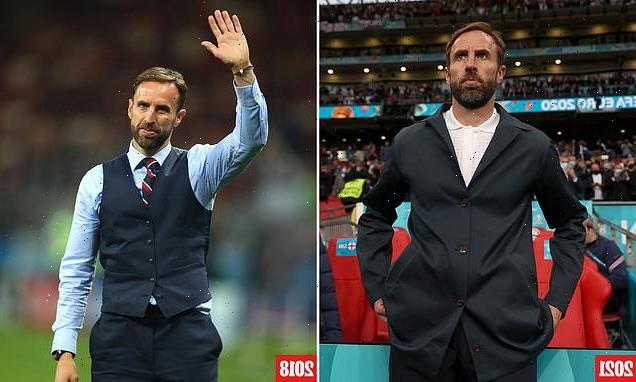 KATIE HIND: Gareth Southgate should ditch the ‘shacket’ – a cross between a shirt and a jacket that’s a big hit this summer – and spruce up his misfiring England team

On the coat-tails of his waistcoat becoming the country’s most-talked-about fashion item after the last World Cup, Gareth Southgate’s touchline outfit has prompted chatter once again. This time, though, it has been panned as a fashion disaster.

For his team’s dismal draw with Scotland on Friday, the England manager debuted a new look – the Shacket, a cross between a shirt and jacket.

For those not quite up with the latest recommendations of magazines such as GQ and Esquire, fashion experts claim it ‘will promise to be your seasonal saviour’. 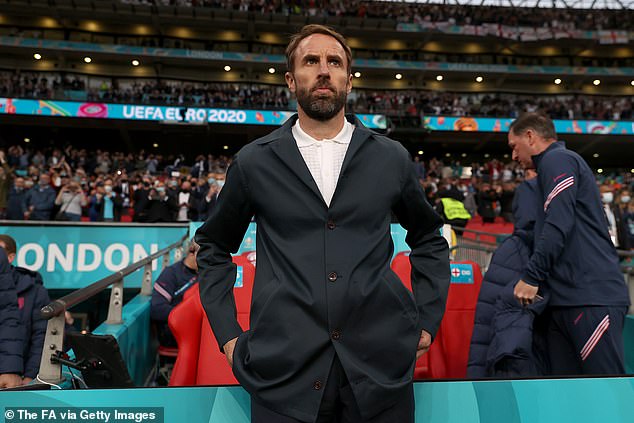 For his team’s dismal draw with Scotland on Friday, the England manager debuted a new look – the Shacket, a cross between a shirt and jacket

For Southgate, 49, it certainly wasn’t that. Standing in the Wembley rain and unable to motivate his team, he looked to the sky, dishevelled with the button undone.

His fashion faux pas was mocked, like his on-pitch tactics. One Twitter user suggested he was trying to imitate rock band Oasis, saying: ‘Liam Gallagher could have made that work, definitely maybe, but not you.’

Southgate’s Shacket is sold by London-based fashion label Percival Menswear at £199. It is one of many available on the high street, with Marks & Spencer and Next both selling their own designs.

Fashion blog Rydale brims with enthusiasm, saying: ‘More commonly known as a ‘summer jacket’ or ‘overshirt’, which is the ideal layering piece to keep the chill off for when the sun is setting, but still ensuring your styling is on point and you look like that summer babe you are.

A shacket also enables you to create more of a signature edgy style than a coat, but still keeps you just as warm.’

Underneath, Southgate wore Percival’s Surrey Knit Cuban White Rib, on sale for £109. But he might want to reconsider the top if we later face Portugal – because it was made in that country. 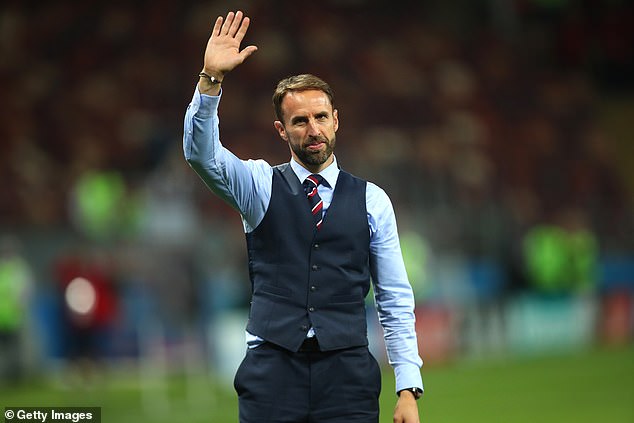 Both items are part of the capsule collection Percival has provided to the England boss for the Euros.

In May, Southgate asked a member of his staff to contact the brand to request it dress him for the tournament. Two men from the firm visited him at his Yorkshire home and supplied eight pieces of clothing, including the Pablo Cuban Knit top, also £109, that Southgate wore for the opening game against Croatia.

There is also a navy two-piece suit – without a waistcoat – a knitted cardigan and two more shackets, one described as ‘midnight with olive’.

Writing on its Instagram page, the company said: ‘Five weeks ago, we got a phone call… ‘Gareth Southgate really likes your brand, would you like to dress him throughout the Euros?’

‘Two weeks later, we had lunch at his house and produced for him a wardrobe fit enough to take King Arthur and his 12 knights in to battle.

‘We’ve developed some retro-inspired smart polos, an unlined summer suit and paired it with our classic Sherlock to cover all scenarios.’ 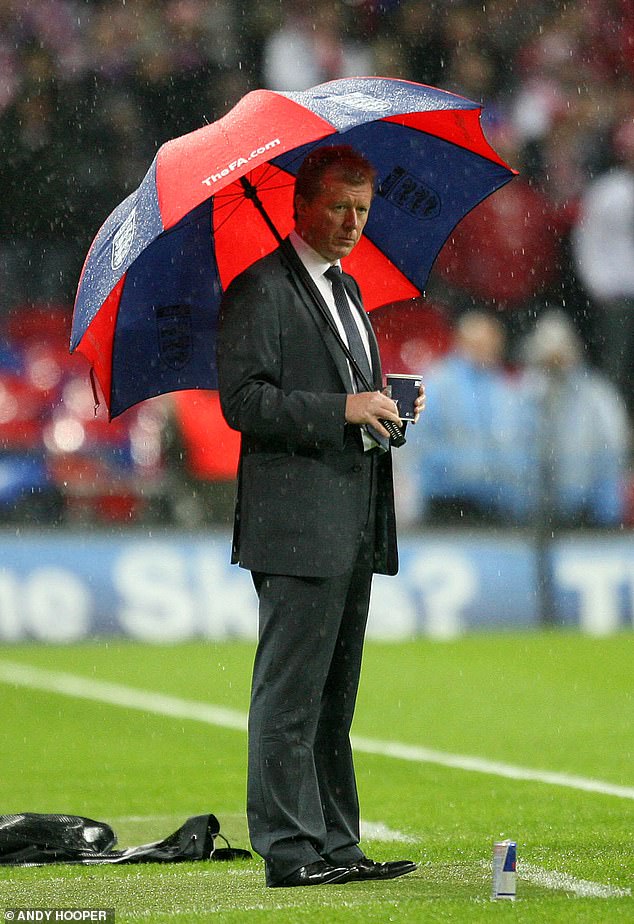 At least Southgate didn’t opt for the ‘Wally with a Brolly’ look former manager Steve McClaren chose during England’s defeat by Croatia in 2007. The 60-year-old became a laughing stock, with his No 2, Terry Venables, telling him: ‘That might not look great, boss.’

Another compared him with X Factor judge Simon Cowell, saying: ‘I presume, at some stage, Simon Cowell is going to come on and demand his teeth back from Graeme Souness.’

The FA last night refused to comment on whether Southgate had paid for the clothes.

Audience of 20million tuned into the goalless Battle of Britain

A peak audience of 20 million tuned in to see England take on Scotland on Friday in what was dubbed the Battle of Britain.

Figures announced yesterday by ITV also revealed that an average of 13.1 million viewers watched the tense goalless draw between the historic rivals at Wembley.

Meanwhile, the match also set a streaming record for the commercial broadcaster, with 4.8 million streams across ITV Hub and Scotland’s STV Player. 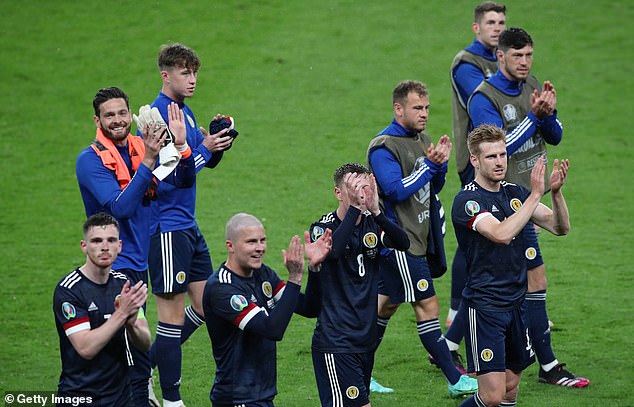 The game is the most watched of the delayed Euro 2020 tournament so far, and the most popular England game since the 2018 World Cup semi-final against Croatia, which attracted 27.5 million viewers.

It also beat the average audience of 11.6 million who watched the BBC last Sunday for England’s opening 1-0 win over Croatia.

The biggest watched game not involving a home nation was the France v Germany clash last Tuesday on ITV, with 9.4 million viewers.

It was the first time England and Scotland had faced each other in a tournament since Euro 96 – a match which England won 2-0.

On Tuesday, England face the Czech Republic at Wembley, which will decide whether they finish first or second in Group D. If Gareth Southgate’s team are top, they play the runners-up of Group F, which features France, Germany, Portugal and Hungary. If England finish second, they will face the winners of Group E, which includes Spain.

For a man who had a football pitch installed in his back garden, it was hardly surprising that Rod Stewart was one of the first to be spotted at Wembley.

The London-born star, whose father was from Leith, was snapped in a tartan facemask and later hugging other supporters as he cheered on his beloved Scotland team at Friday’s Euros match.

Other well-known faces among the crowd for the England vs Scotland game included pop singer Ed Sheeran and frontbenchers Michael Gove and Matt Hancock. 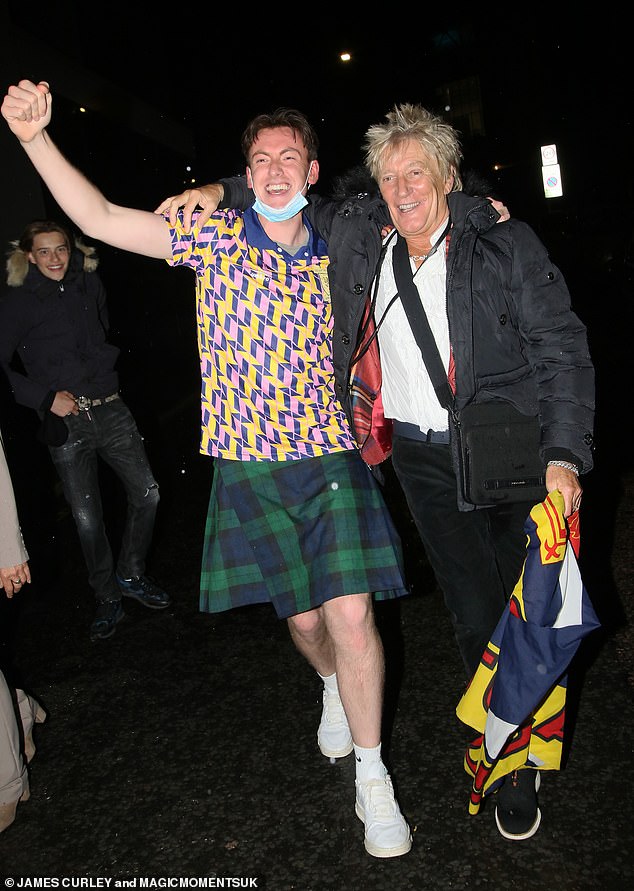 Last night, an estimated 20,000 Scotland supporters headed back home after a night of partying, despite the goal-less draw.

However, some Scots reacted with fury to footage of jubilant fans, wearing kilts and draped in Scottish flags, singing, dancing and letting off smoke bombs in a packed Leicester Square.

One social media user said: ‘I’m guessing we’ll have a spike of the Delta variant in areas of Scotland soon as a shower of morons head to London and jam-pack themselves into Leicester Square.

‘Selfish idiots just for a game of kickball.’

Another added: ‘My concern is the travelling fans taking the Delta variant back to Scotland and destroying everything that has been done so far.’

Hundreds of crushed beer cans and a sea of litter were left strewn behind in Central London as supporters headed to Wembley Stadium and pubs ahead of kick off.

However, a number of Scotland fans took part in a clean-up – with some even returning after the game to finish the job. 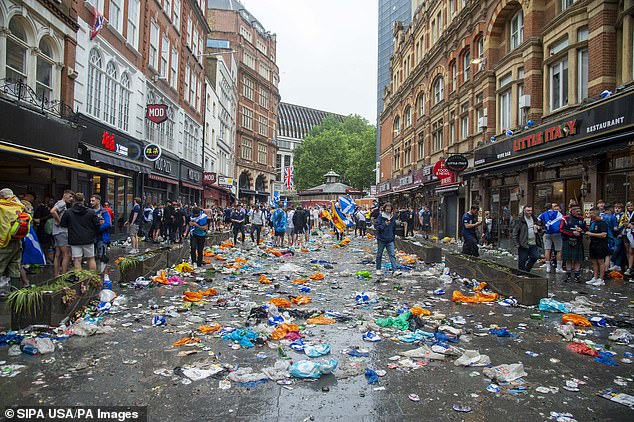 UK fans bought 3.4 million pints during the 90 minutes of play, with a total of 14.8 million sold across England and Scotland on match day, according to estimates by the British Beer and Pub Association.

However, the trade bodies’ chief executive, Emma McClarkin, said Covid restrictions hampered festivities, adding: ‘Pubs in England and Scotland [sold] 850,000 pints less than they would have done without restrictions. That will cost pubs in both countries £3.2 million.’

Estimates that 20,000 Scotland fans travelled south were described as ‘very conservative’ by a London Assembly member as pictures showed huge crowds gathering ahead of the game.

Despite the good-natured revelries, 30 people were arrested as part of the policing operation, the Metropolitan Police said yesterday.